COVID-19 doesn’t discriminate based on citizenship. That the government continues to is even more reckless than usual. 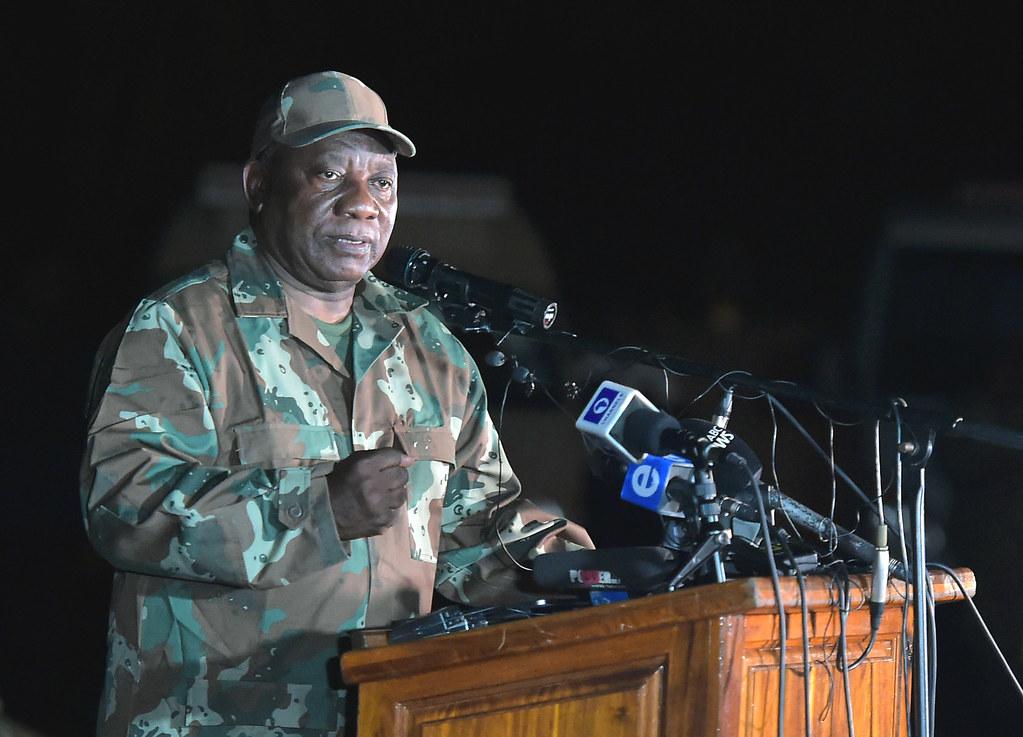 President Cyril Ramaphosa addressing the South African National Defence Force ahead of the lockdown in response to the coronavirus in South Africa. Credit: GCIS.

Across the world, countries are learning that the coronavirus doesn’t discriminate. To contain the spread of the disease, everyone in the country must be able to self-isolate and have access to health care – regardless of their citizenship or passport.

A few countries such as Portugal have recognised this fact and granted temporary citizenship rights to all migrants. Some have not.

South Africa declared a state of disaster in mid-March and became the first African country to impose a lockdown a week later. Ordinary life has been upturned – except that when it comes to the government’s treatment of migrants and asylum seekers, it is mostly business as usual. This is damaging not just for the wellbeing of migrants but for the public health of the whole nation.

The government’s anti-migrant approach has undermined its response to the COVID-19 pandemic in a variety of ways.

One of the first measures it announced to deal with the spread of the disease was to build a 40km fence on the border with Zimbabwe. At the time of writing, the Coronavirus in Africa tracker shows that South Africa has 1,845 confirmed cases of coronavirus compared to Zimbabwe’s 11. Moreover, the virus has mostly been spread by people travelling from Europe by plane. Yet Public Works Minister Patricia de Lille insisted the fence with Zimbabwe was necessary to “ensure that no undocumented or infected persons cross into the country”.

When South Africa could have been focusing on essential aspects of it COVID-19 response, it was instead diverting critical resources to building a border wall, a notorious costly and often ineffective measure in the first place. Flexing its emergency powers, it used the pretext of the pandemic to justify its increasingly repressive and militarised approach to dealing with migrants.

Politically motivated and unclear communication have also undermined the government’s lockdown policy. For example, the government initially announced that small shops known as spaza could remain open, but only if they were South African-owned. On the first day of the lockdown, immigrant-owned shops were already being shut down by police. “We want to make sure that the quality of food and surety of the quality of products is there,” said the minister for small business development Khumbudzo Ntshavheni.

This approach was in keeping with South African politicians’ use of xenophobic rhetoric to gain populist points. This has contributed to several waves of mob violence against migrants, most notably in 2008 and 2019. The government’s anti-migrant stance is always irresponsible, but in the context of the pandemic, it was also counterproductive. Its decision to close foreign-owned shops meant that many residents of townships had to go much further to buy necessities, increasing the likelihood of spreading the virus. On 6 April, a new directive permitted all spaza shops to remain open, but by then the damage may have already been done.

In its response to COVID-19, the South African government has exercised a small bit of flexibility in regards to asylum seekers. It has said that anyone whose asylum permit expires in this period will have 30 days after the lockdown is lifted to renew it. While this might seem like a concession, however, seen in context it is clearly inadequate. Even at the best of times, the Department of Home Affairs has failed to keep up with its paperwork. Half of its six refugee reception offices have been closed – either partially or fully – since 2011 despite court orders to reopen them. And according to a 2019 audit, it would take the Refugee Appeals Board 68 years to work through its backlog with existing capacity.

Asylum seekers in South Africa are forced to navigate an onerous and dysfunctional bureaucracy in normal times. A temporary stay on having to renew permits during the pandemic is, at best, merely perfunctory.

What South Africa must do

Before the coronavirus became a crisis in South Africa, the government had been busy restricting the rights of migrants and asylum seekers. In January, it implemented a law that controversially forbids asylum seekers and refugees from taking part in any political activity. In February, it passed a border management bill that further militarises its approach to migration and refugee governance.

Despite the spread of COVID-19, the government is holding fast to its xenophobic instincts, even at the expense of a more effective pandemic response.

If South Africa wants to truly tackle the coronavirus, it cannot be business as usual on this front. The government’s response must be inclusive of all people living in the country – regardless of the papers they hold – for it to work. It must focus stretched resources where they are needed, not on irrelevant and opportunistic projects. And lawmakers must coordinate with their international counterparts – across the region, continent and the world – to tackle this global problem, not just build walls.

It is never the time for point scoring and advancing a xenophobic agenda, but now it is even more reckless than usual.