During COVID-19, youth from different ethnic groups have worked together drawing on teamwork and friendships forged on the football pitch. 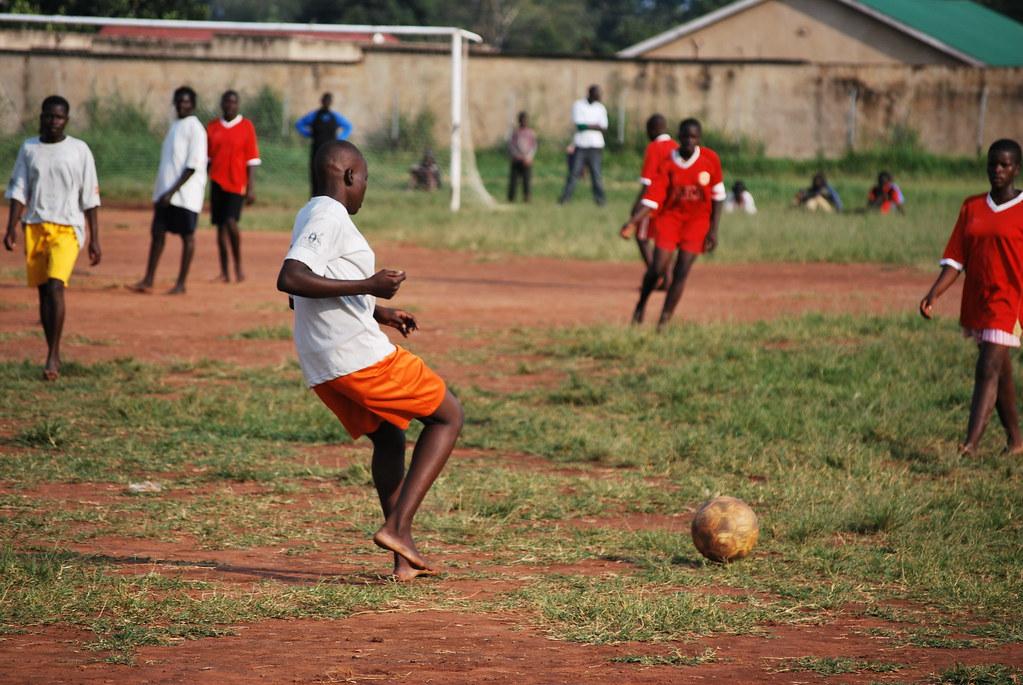 I was eight years old when I made the journey from South Sudan to Uganda in 2000. At that young age, I didn’t understand why we were leaving my hometown of Mayom. I thought we were headed to Raabchiok, a village about 60 km away, to pay dowry for my brother’s wife.

I assumed that after the short trip I would return home to my mother. But while we were away, fighting intensified between the Sudanese government forces and the rebel Sudan People’s Liberation Army (SPLA). We could never go back.

Instead, we headed to Uganda. I remember the journey like it was yesterday. I remember sleeping under a leaking roof at the home of then Commander Kerbino Kuanyin Bol in Wunrok. I remember the lion that followed us for nearly an hour as we made our way through bushes to Mayen Rual. I remember how flood waters reached my knees as we reached Liet-Nhom and how tired I was even though the only thing I was carrying with me was the shirt on my back.

I also remember that it was people from the Dinka tribe, supposedly our enemy, that helped us along the way. I was served roasted groundnuts and welcomed with cold pots of drinking water by women from the Dinka families. These women shouted at my brothers, “he is too young. Why are you making him suffer? Leave him with us. We’ll look after him.” They couldn’t understand why such a young boy was being taken on such a gruelling journey to an unknown destination. To this day, I wish I could go back to thank them for their kindness.

When I got to Uganda, the nightmares came with me. One particular memory played on my mind night after night for years. It was of a time I was gathering wild fruit as my older brother Matut grazed cattle near our home. Suddenly I felt a crunch underfoot. When I looked, it was the body of a dead soldier. Two vultures, which had been picking at his body, opened their wings wide. I ran back home, not stopping for four kilometres, shaking and crying all the way. For eight years, every time I tried to sleep, the image of the dead man’s body would creep into my mind.

All that changed when I started to play football with other kids at the Imvepi Refugee settlement. My nightmares were replaced with dreams of kicking the ball. Each night, I would see myself running with the other children in my sleep, smiling and laughing.

At that young age, I realised that sports could be a powerful tool for healing trauma. It had helped me heal. The other thing I loved about football was that the boys that I played with in Imvepi settlement were not all from my tribe. I saw that the tribal differences that pulled us apart were not real, but politically fabricated.

In 2016, I and a group of other refugees decided to create an organisation called the African Youth Action Network (AYAN) to address conflicts in refugee camps and help build peace amongst different ethnic groups and clans. Once again, I was able to see the power of sport in bringing people together.

In 2018 and 2019, clashes erupted in the Kiryandongo Refugee Settlement in Midwestern Uganda between different sub-clans of the Nuer ethnic group. Worst of all, the fighting had started on the football pitch.  The settlement commandant reacted by banning all forms of sport. I knew that football wasn’t at fault and that, in fact, the community was potentially losing one of the few things that brought them together. My team and I immediately went to the Principal Settlement Commandant with a simple suggestion: don’t stop sports, change it. We lobbied them to keep the football pitches open but to ensure that teams are made up of different clans, sub-clans and tribes.

It may sound like a very simple solution, but we have seen results. First, games have continued in the camps, which is vital for both the physical and mental health of the refugees. Second, they provide the space people to see each other as team-mates, as brothers and sisters. I have seen how the harmony and teamwork among the refugee youth in Kiryandongo refugee settlement has grown as a result of the new mixed football teams.

During COVID-19, youth from the Nuer, Kuku, Acholi, Kakwa, Azande, and Dinka groups have worked together to share information on preventive measures. I have no doubt that these friendships and teamwork came as a result of young people constantly interacting and playing together. On a personal level, some of the boys I played football with as a child in Imvepi Settlement are still my best friends today.

The conflict in South Sudan is a political one. Like many conflicts around the continent, politicians have used the tribal card to divide people and garner support for themselves. The Dinka women who helped me as an eight-year-old when I fled South Sudan taught me an important lesson at a very young age: we are all one people. The future of our country depends on us coming together across ethnic lines. I believe that sports can help. A peaceful South Sudan starts in our minds.