The powerful tactics of subversion in Beyoncé’s Black is King

Using themes of water and royalty, the American artist reframes narratives of Blackness. 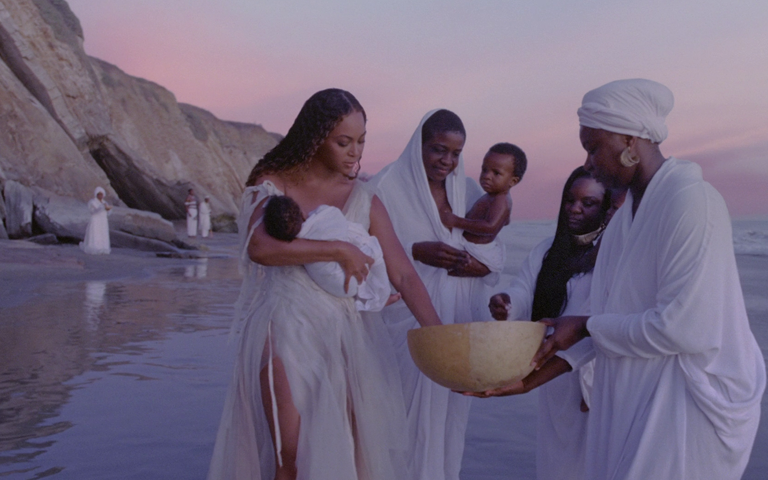 Still from Black is King

When Black is King was released across the globe in late July, the 85-minute long visual album was all the rage. An accompaniment to the live-action remake of The Lion King, it had critics and fans revelling in its fashion, music and cinematography.

Even if you haven’t seen it, you may have come across pictures of a Bantu-knotted Beyoncé shadowing dancer Stephen Ojo in an energetic performance of the zanku in ‘Already’. You may have seen images of Kelly Rowland being serenaded by her best friend in ‘Brown Skin Girl’ or the tableaux of a flamboyant tea-party in ‘Mood 4 Eva’. Beneath these optics, however, there’s a lot more going on.

Beyoncé’s Black is King not only tells the story of the Lion King in a fresh light but it is subversive in doing so. It employs metaphors such as water and royalty to draw out big themes that speak directly to black people, who are exclusively the focus and cast of the film.

The film’s principal thematic metaphor is water as an object of renewal and power. We see babies being ceremoniously sprinkled with holy water in the film’s first set of scenes. We hear one of the narrators stating that “water signifies the ability to overcome” just before a young, human Simba finds his way back to his true identity and his loved ones. We see Beyoncé, who plays an ancestral guide in the film, say to Simba, “you’re swimming back to yourself, you’ll meet yourself at the shore”.

Contrary to what is depicted here, water bodies have not always represented renewal or power to black people, particularly African-Americans. They have been an object of fear and persecution. To build American industries, Africans were captured as slave labour and shipped across the Atlantic. Many died on the journey, some by suicide. Refusing to submit to slavery, they threw themselves overboard and drowned.

Black is King upends this perception. It takes water, a former harbinger of death, slavery and racism and reforms it entirely. First, the ocean is depicted as a connective tissue between Africa and generations of African-Americans who have been separated by slavery. The film also reiterates that water is nothing foreign to people of African descent; that black people have always had an aquatic culture, especially those living along coastlines in West Africa where the largest number of black people were shipped from to the US. In one scene, Beyoncé says “the coast belongs to our ancestors”. The film further reclaims our relationship to water, highlighting its powers to cleanse and promote growth within the journey of finding the self.

In Black is King, the black family and community is royalty. Tapping into the theme of the monarchy in the original film, many of the songs in the album emphasise this, notably, ‘Already’ featuring Ghanaian artiste, Shatta Wale.

It is almost as if Beyoncé is casting a spell as she sings:

“Long live the king, you a king you know it,

King already, already, you know it,

King already, already, you know it

She uses repetition and rhyme in an incantatory fashion to instil the idea that Black is king.

With this theme, there are two elaborate subversive tactics at play.

First, Beyoncé is reframing the image of the Black body and person. Beneath the white gaze, Black people have been undervalued and criminalised. We see this play out in the US where black people are the targets of police brutality. Further, black people everywhere, especially on the African continent, have been framed as having no history other than one of impoverishment, devastation and war. Black is King insists these narratives are false.

Second, it also subverts the meaning of royalty as adopted by the original The Lion King film whose ‘circle of life’ philosophy saw the strongest animals rule over the rest. In one scene, a voice explains, “Being a king is taking what’s yours, not just for selfish reasons, but to actually build a community”. This message of social dependence is redolent of what is known as ubuntu in Southern Africa, ujamaa in Tanzania, obuntu in Uganda or unhu in Zimbabwe; different words for the same principle that believes compassion should be at the centre of all human interaction.

In another scene, with the now married Nala and Simba in view, an invisible female narrator states: “It would be a better world for all of us if kings and queens realised that being equal, sharing spaces, sharing ideas and sharing values and sharing strengths and weaknesses, balancing each other out is how our ancestors did things and that is an African way. The royalty in you is there for you to be a blessing to others, for you to leave a legacy that others can look to and find strength and find healing, as well.”

The idea of us all being connected in “the great circle of life” now has a transformed meaning from what the original film intended. It means respect for life, cultural exchange and sharing knowledge for the betterment of communities.

Although Black is King is sensational, visually breath-taking and bold in its subversive tactics, it is not perfect.

While it’s able to reimagine Black identity and royalty through principles of ubuntu, the concept of family is exclusive to traditional concepts of a mother, father and child as seen in the sentimental yet heteronormative images of families posing together towards the end of the film.  During a time when queer communities are experiencing persecution in Black communities, through the state and at the family level, it’s important that these works of reimagination are inclusive of queer lives and families.

Also, the visual album’s rich tapestry of Black beauty, spiritual reformation and self-innovation acts as an ode to Black people and as a “love letter to Africa”. It clearly expresses Africa’s refusal to be lumped into one thing or to be understood completely. But in the end, the film offers the audience more than what it can consume. It makes endless visual, literary and musical references that might be hard to follow. It would take more than watching just the film to understand it in its entirety and even then, that might not be enough.

Ultimately, Black is King is an elaborate, visually striking and thoroughly entertaining piece of art. It complicates and is bigger than our understandings of Blackness. Employing worldbuilding and the art of subversion, it recasts Black stories, reconstructs our identities and uproots false narratives about us.

Could the opposition really secure a shock ...

Mamaputle Boikanyo is a writer from Johannesburg, South Africa with bylines on publications such as News24, Business Day TimesLive, Ja Magazine. She writes on social issues, pop culture, art and has a lot of love for literature.