SARS is as vicious and corrupt in northern Nigeria as it is in the south. Claiming otherwise is false. 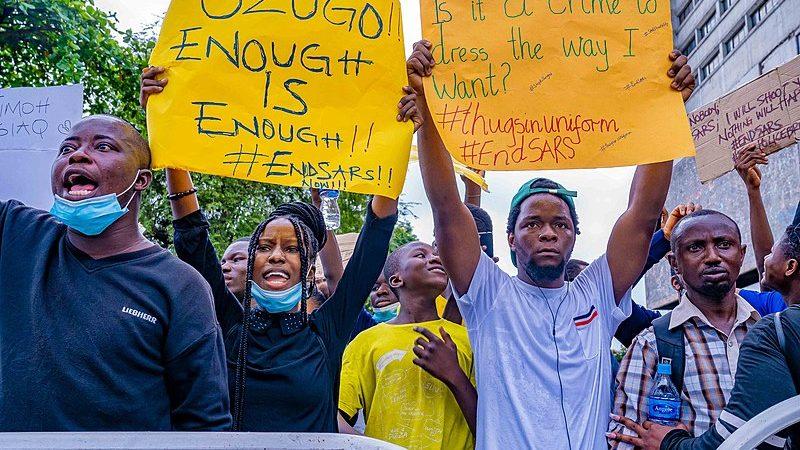 Over the past two weeks, Nigeria saw unprecedented protests that defied ruthless force and pressed the country’s president to relent by announcing the dissolution of the Special Anti-Robbery Squad (SARS) in a televised broadcast. The squad rose to notoriety in recent years as the most violent police unit in the country with its members, including senior leaders, accused of egregious human rights violations. Protesters are however not convinced by the President’s move to close the police unit, claiming such announcements have been made before, with no actual action taken. They continue to protest in over 25 states in the country, insisting that their demands be met, which are, amongst others: prosecution of officers who have brutalized or killed citizens, compensation to the families of deceased victims of police brutality, increased compensation to police officers. In recent days, they have further demanded the resignation of the Inspector-General of Police on whose watch at least ten protesters were killed since the protests began.

While the majority of the country has been united in one voice that SARS was irredeemably bad and therefore had to go for good, a minority took a different approach. A section of youths in the northern region of the country was reported to have held “Pro-SARS” rallies where they demanded that the unit should be reformed, rather than scrapped. In some cases, some advocated directly against the #ENDSARS protests. Others insisted SARS was not their most pressing concern and piggybacked off the attention the trend was receiving online to advocate for #EndBokoHaramNow and #EndBanditryNow. Several factors – including SARS’s differing modus operandi, widespread insecurity and political manipulation – have played a role in the reluctance or even opposition of some northerners.

SARS’s differing modus operandi in the North and the South

As a human rights lawyer who has prosecuted dozens of cases against SARS officers in the north, I know that SARS is as vicious and corrupt in the north as it is in the south. However, the repressive unit adopts a different approach to achieve the same results. While they publicly stop, detain and extort or kill in the south, their methods in the north are a bit more clandestine. Perhaps because northerners are historically more submissive to authority and are less educated including on their rights, SARS officers arrest “suspects” from their home or neighbourhood mostly at night, take them to SARS torture chambers located in each police command where they secretly torment and extort them. Those that get released are threatened and made to sign bogus confessional statements and undertakings not to speak against the squad, in the future. Those that get killed are thrown into ponds or dumped at public mortuaries. Where bodies are given to family members, they are made to sign documents that their relatives were robbers or died of natural causes. None of these is mere speculation. I have been briefed as a lawyer by families in each of the above categories.

For instance, in 2014, I was employed by a family whose son spent two weeks in SARS’s torture chambers in Kano. The team kept denying that they had him even when I personally visited their office. It took the intervention of the Commissioner of Police to compel SARS to arraign him in court. He was so horrifically tortured that he partly lost sight in one eye and his right hand was permanently damaged. He told me he was taken by SARS officials to a pond at night and was threatened with death. They told him his corpse would be thrown into the water if he did not confess and nobody would ever know or figure out what happened to him. They revealed to him that they often killed and disposed of bodies in that way. The young man only lived to tell this story because he confessed to killing two members of Kano State Assembly even though he knew nothing about the crime nor has he ever touched a gun in his life, not to speak of qualifying to serve as a hired assassin. I later used his horrific story at the High Court of Kano State to get the alleged confessional statement extracted under duress invalidated. A different SARS prisoner who became my client narrated a similarly terrible experience. He saw several cellmates dying almost daily as a result of injuries and starvation. However, because SARS mostly commits these illegalities covertly, not everyone in the north knows or understands their sheer heartlessness.

Another reason for the differing disposition towards SARS in some quarters of the north is the alarming insecurity in the region, compared to the south.

The Boko Haram crisis has killed an estimated 40,000 in the northeast in the past decade while criminal gangs in the northwest have massacred an estimated 8,000 persons within the same period. SARS is, in theory, involved in fighting these gangs so some northerners feel disbanding it altogether could worsen the security situation in their region. They reckon that it’s better to rid the unit of human rights violations through reform and prosecution of offenders, rather than completely scrap them. They see dissolving SARS as throwing away the baby with the bathwater.

For other northerners, it is a question of prioritisation. They feel their biggest assailants are Boko Haram and the so-called bandits that kill and abduct dozens literally daily. So instead of dissipating time and energy protesting against SARS, which is a lesser evil, they reckon that it is better to use their resources on pressuring the government to tackle insecurity. Consequently, they created such hashtags as #SecureNorthNow, #EndBokoHaramNow and #EndBanditryNow and marched in state capitals like Kano and Minna to draw attention to the insecurity in the north.

Nigerian politicians are adept at exploiting religion and geopolitical tensions for parochial gains. On this occasion, they sought to use this card to polarise Nigerian youth by peddling disinformation against #ENDSARS. They exploited the involvement of some faces notorious for advocating for the breakup of Nigeria, calling for a revolution or vilifying northerners to frame protesters as southerners working against a northern president to topple his government. While most northerners saw through this scheme, it is natural that some – including supposedly educated and experienced ones – would fall for it. In fact, some of the so-called pro-SARS protests might have been sponsored by politicians and, in some cases, SARS officers desperate to keep their jobs. Other political hacks use the police’s line of branding protesters as online fraudsters (popularly called Yahoo Boys) who are out to get SARS because it has stopped them from committing crimes. This narrative is partly why some northerners rejected the demonstrations against SARS or, at best, did not take a position.

Northerners are not as media savvy as Southerners

It is also worth pointing out that northern voices are hardly heard in the mainstream media including international ones partly because they have few vocal representatives. Furthermore, the virtual part of the protest was mostly on Twitter which is not very popular in most parts of the north. Most northerners use Facebook where the momentum was no way near what we saw on Twitter.

However, all the influential northern voices on Twitter supported the campaign with some of them speaking at rallies in and outside the country. In fact, one of the major faces of the protests in Abuja, Aishaun Yesufu, whose picture has become a symbol of the protests, is a northerner. I spoke in the London protest last weekend and have given several media interviews including Al Jazeera supporting #EndSARS.

By and large, there is no north-south divide in the #SARSMustEnd campaign. Northerners and Southerners, Christians and Muslims, men and women alike, have all fallen victims of SARS’s utter cruelty, corruption and lawlessness. All of us Nigerians are united in this noble struggle to end police impunity in our country. However, as with every human endeavour of this scale, there are a few dissenting voices. Some may have genuine reservations while others may be driven by evil motives, but we cannot let them derail or divide us. We’ve got to continue to treat them like the background noise that they are.