Guinea presidential election: We won and have the receipts to prove it

Candidate Cellou Diallo claims his party has 12,744 copies of results slips that show he won and calls on the electoral commission to show theirs. 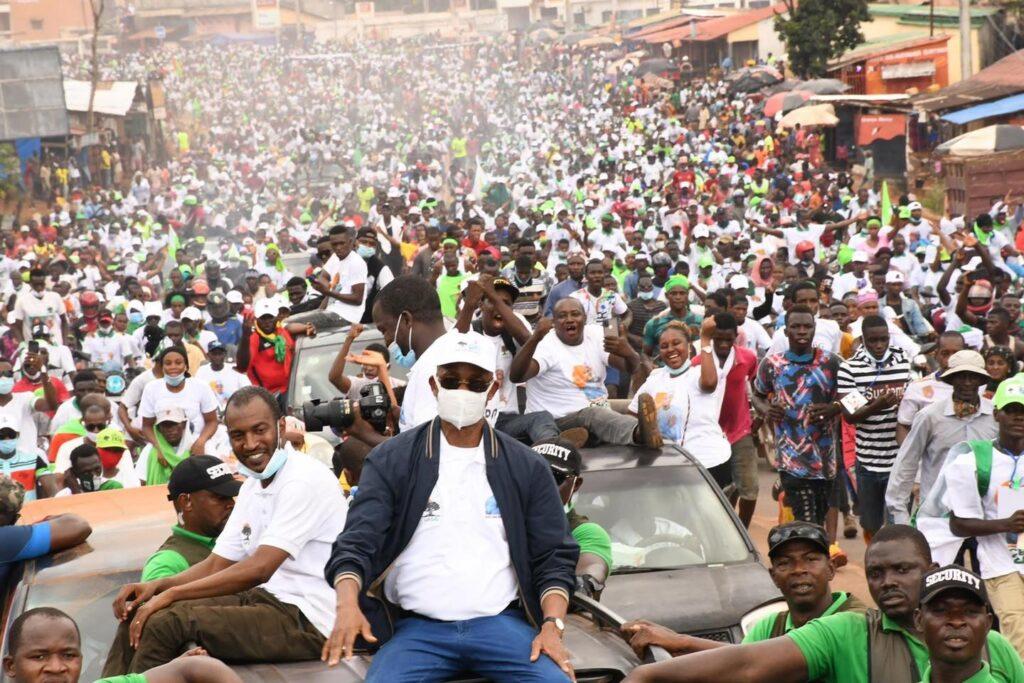 Cellou Dalein Diallo, the presidential candidate for the opposition Union of Democratic Forces of Guinea (UFDG) on the campaign trail ahead of the Guinea presidential election. Credit: UFDG.

Last Sunday, just over 3.5 million Guineans turned out to vote in our country’s presidential election. A period of political violence and social division preceded the poll, sparked by the unconstitutional actions taken by our president, Alpha Condé, who engineered a brazen constitutional coup in an attempt to secure a third successive term in office.

The majority of voters headed to their respective polling stations on 18 October determined to reject the corruption of the past in favour of unity, progress and growth. Despite intimidation, threats and instances of violence, as well as disenfranchisement – in which opposition voters were told they were not registered – a new majority of Guineans voted to end Condé’s attempt at dictatorship.

Guineans instead chose democracy. And my campaign has the receipts to prove it.

Our team designed and implemented a comprehensive, ground-breaking parallel voter tabulation (PVT) system through a web application that received photos of results slips from polling stations across the country. Out of the total of 15,083 polling stations in Guinea, our team was able to receive the official tallies for 12,744 – over 80% of all polling stations.

The collated results that we have from the 12,744 polling stations prove that I in fact obtained 52.5% of the overall votes cast at these polling stations and that Alpha Condé received 39.24%. These results [a summary of which can be found here] completely contradict what CENI (the Guinean Electoral Commission) and some media outlets are now reporting as the preliminary results. This is wholly irresponsible. It is also based on mistruths.

As in the 2010 and 2015 elections, CENI is conspiring with Condé and his party to rig this election and falsify the results, thereby robbing Guineans of their aspirations and their human rights. As I write this, my home is surrounded by heavily armed police who are preventing anyone from entering or exiting my residence. Out on the streets, the police are attacking my supporters and peaceful protesters who have courageously stood up to this electoral theft. Already, 19 of my fellow Guineans, including one infant, have tragically lost their lives as a result of this police brutality. Today, the government has instructed the army to “restore order” and internet access has been shut down.

On Wednesday, the police also raided our party headquarters and stole all of our ICT equipment. This was a direct result of our press conference earlier in the day during which we presented the results of our PVT count showing that I had won. Simply put: Condé and his regime fear the truth – the truth that we communicated. They fear a future in which they can no longer rule over a population that has rejected their mandate and bravely chose the alternative future that I, along with my party, represent.

My number one priority has always been, and will remain, the well-being of the Guinean people. For the sake of our citizens and the democratic future of our nation, we must find a way to ensure that the wishes of our voting public is respected. Let me repeat and let me be clear: we have 12,744 copies of results slips that can be checked, audited and independently verified. We believe that it is incumbent upon CENI to produce its own result slips for the exact same 12,744 polling stations. Only then can we conduct an exacting reconciliation to identify where the discrepancies have arisen.

At this crucial juncture in Guinea’s history, our friends in the regional and international community must bring their influence to bear. In particular, the vital process of validating the election results must be overseen by an appropriate regional or international body of experts and include observers from both the ruling party and mine, as well as CENI representatives. This inclusive and transparent course of action is the only way to calm the growing tensions on our streets and to restore faith in our political institutions. An example needs to be set now. Lines must be drawn. No longer can we as Guineans – as Africans in general – accept flawed and patently rigged elections. This is a recipe for further unrest and disaster.

The failure to act in this moment will have disastrous consequences, including the further loss of life. It will also lead to other would-be dictators in the region being inspired to act with as much impunity as Conde has. This is unacceptable. And we must stand up, together.

Guinea’s nascent democracy matters. Our peoples’ lives matter. The right thing to do, today, is to commit to freedom, to respect for democracy and to putting the rights of the Guinean people first. This can only be accomplished through the collective action that is now necessary to determine the rightful, duly elected winner of this election. Please stand with us. It is always the right time to do the right thing.

To avoid a repeat of the Mogadishu ...

Cellou Dalein Diallo is an economist and former Prime Minister of Guinea (2004-2006). He is currently the President of the Union of Democratic Forces of Guinea and its candidate for president in this year’s election.