Tanzania’s election results are predictable. What happens next is not

If there were a level playing field, there’s every reason to believe the election would be highly competitive. But that is not the case. 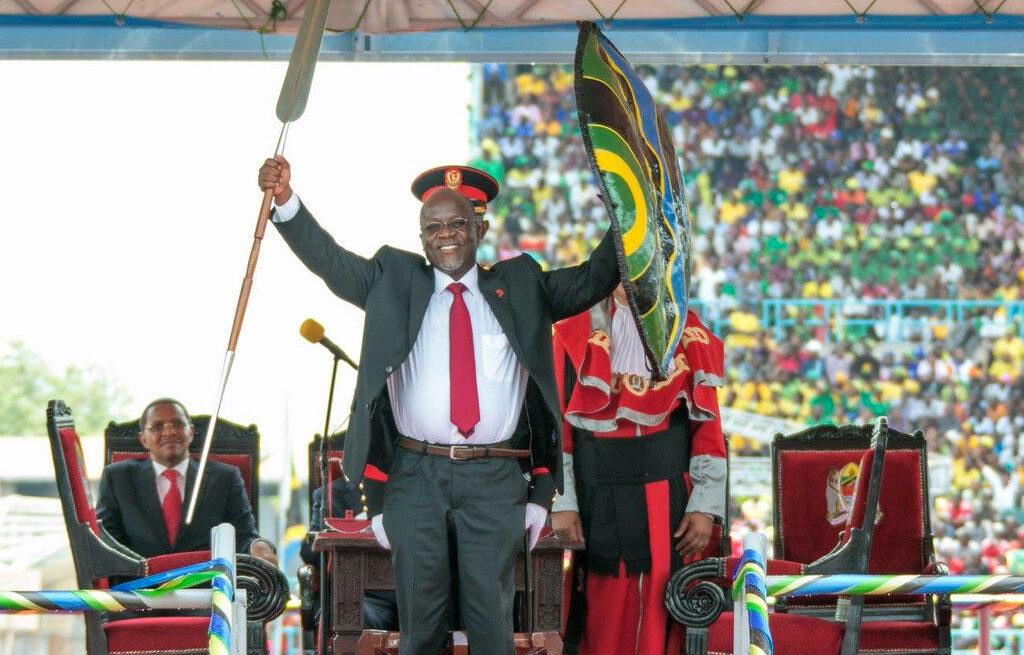 The swearing in of President John Magufuli for his first term after the Tanzania elections in 2015. Credit: Paul Kagame.

Tanzania’s general election taking place on 28 October has some unusual features. It may well be the first election of the 21st century in a supposedly democratic country to be taking place without any credible opinion polls. And it takes place in the shadow of a global pandemic that appears to have defied the epidemiologists’ models and spared much of the continent.

We don’t have opinion polls because the government has gone to great lengths in recent years to politicise statistics. Polling organisations have found their activities constrained, to the extent that conducting and publishing an independent opinion poll has become essentially impossible.

And yet, even without polling data to guide us, it’s also one of the most predictable elections of modern times. The headlines could be written already: President John Pombe Magufuli of the ruling CCM will win a second term in office; his party will retain its large majority in parliament; and the party will retain control of both the Presidency and the House of Representatives on Zanzibar as well.

No doubt there will be many supporters of opposition parties – principally Chadema in most parts of the mainland and ACT Wazalendo on Zanzibar – who take issue with these “premature” conclusions. They will point to huge attendance at rallies featuring Chadema’s presidential candidate, Tundu Lissu, or to enthusiastic support for their candidates among their friends or on social media. I don’t doubt their conviction, any more than I doubt the size of their rallies or social media support. I do, however, question whether these things are really what counts.

That’s because there are three factors that outweigh any number of rallies or social media posts.

First and foremost, this is not an election where the playing field is remotely level. For the past five years, the government has made life difficult for opposition parties – blocking party rallies and meetings, forcing opposition political leaders to spend more time in hospital, in prison, or fighting legal cases than preparing to fight an election. Tundu Lissu himself is the most obvious example – he only recently returned to Tanzania following nearly three years of treatment for gunshot wounds after surviving an assassination attempt in 2017.

The media and civil society have felt similar pressures over this time. We have seen a rapid shrinking of the space for the media to report on wrongdoing, for civil society organisations to raise concerns, and for public debate and criticism on social media. Human rights concerns have been a popular rallying cry for opposition parties, particularly among their core supporters. But it is likely that the main effect of 3-4 years with little or no public criticism of government from independent voices is that many – probably the majority – who do not follow political events closely, hear far more about government achievements than problems.

Even the election campaign itself has been unbalanced. Opposition candidates have had their eligibility challenged for obviously baseless reasons – such as writing the address in abbreviated form on nomination forms. Others – including both Lissu and the main opposition candidate for the Zanzibar Presidency, Maalim Seif Sharif Hamad – have had their campaigns officially suspended by the electoral commission or interrupted by overzealous policing. Underpinning this is a very real sense that both the police and the electoral commissions owe their loyalty to the ruling party.

Second – and opposition party activists will not like this point – President Magufuli has earned and maintained a lot of public support over the past five years. His efforts to combat corruption, stand up to foreign investors and spend big on infrastructure projects may not stand up to expert scrutiny, but they are eye-catching and popular. We have no opinion poll data on the president’s popularity since April 2018, when previously sky-high approval ratings had fallen to 55%, but his no-nonsense brand is well-established and has a populist appeal.

Third – and I really don’t like to say this – even if voters defy the odds and cast their votes in sufficient numbers to earn an opposition victory, there is no guarantee that the true results will be announced. There are no real election monitors with teeth, either domestic or international, and the electoral commission is hardly even pretending to be an independent referee anymore. More particularly, the evidence from previous elections in Zanzibar – historically much more tightly fought than nationwide elections – is that CCM knows how to ensure the results are announced in their favour and that the party is willing to take this step. In 2015, the Zanzibar results were annulled citing irregularities at a point where early results suggested an opposition victory. International observers criticised the process in the strongest of terms. Similar issues arose in previous elections as well, with results repeatedly very tight and polling marred by violence. In short, even if the opposition gets more votes, the ruling party will not give up power easily.

As soon as the dust has settled

We will never know what the results would be if the playing field were truly level. Indeed, with strong presidential candidates in Lissu and Maalim Seif, and with strong arguments to make on the economy as well as democratic rights, there is every reason to think the elections would have been highly competitive. As it stands, however, this is simply not the case.

So, if we know the results in advance, is there any reason to pay attention to this vote? Well, yes, absolutely. First, we could have a volatile combination of electoral mishandling, heavy-handed policing and over-optimistic opposition supporters with more-or-less legitimate grievances. This could potentially boil over into post-election violence. Mainland Tanzania has, fortunately, largely escaped such troubles in the past, but tensions are higher than ever this time around. We hope this will not happen, of course, but the international community in East Africa would be wise to be ready to respond fast if necessary.

Secondly, assuming that President Magufuli and CCM do indeed emerge victorious, the next five years will be a critical period in Tanzania’s history. Opposition calls for constitutional reform – to the powers of the presidency, the relationship between mainland Tanzania and Zanzibar, and protections for democratic rights – are likely to get louder.

And finally, there is likely to be an almighty struggle for the soul of CCM. Will President Magufuli do the previously unthinkable and attempt to remove term limits? If so, how will those (substantial) elements in the party who are at-best reluctant supporters of Magufuli react? If not, how will they (and Magufuli’s allies) prepare themselves for the next vote in five years’ time?

We can be confident of the results of this week’s poll. We can be even more confident that as soon as the dust has settled, the battle for 2025 will begin.

To avoid a repeat of the Mogadishu ...