The dangers of playing politics with COVID-19 cures

As treatments for COVID-19 are sought, there also needs to be a stronger stance against promoting unproven medicines. 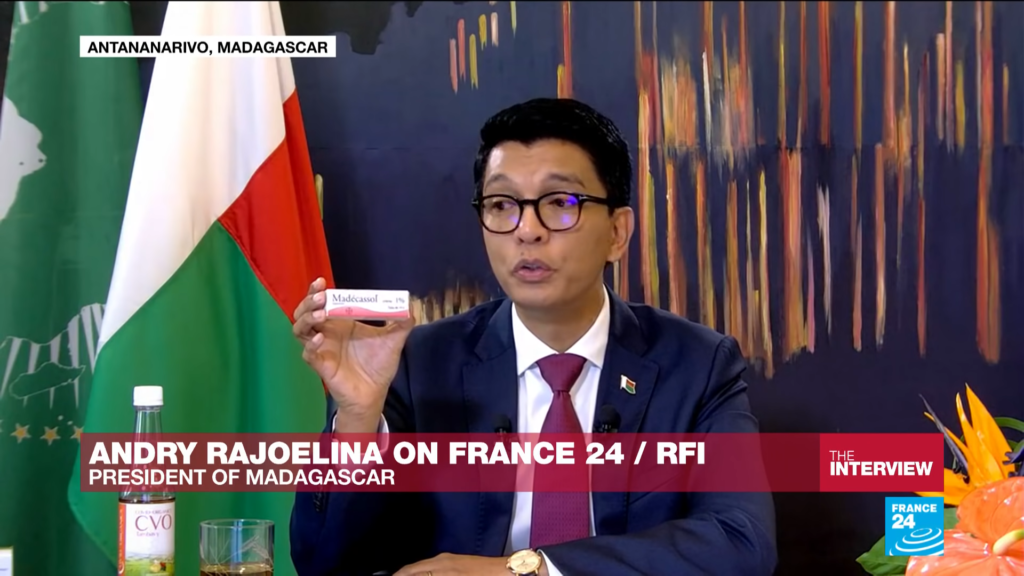 President Andry Rajoelina promoting his untested COVID-19 cure in an interview on France24.

Against the backdrop of the COVID-19 pandemic, court proceedings against the Gambia’s former president and his fraudulent HIV “treatment” underscore the dangers of politicians promoting unproven cures.

Over the years, the search for a cure for HIV has yielded numerous purported wonder drugs. Their development has always been shrouded in secrecy, riddled with unethical and unscientific methodologies, and defended by political interests. Among the most famous of these is the former South African President Thabo Mbeki’s support for the industrial solvent Virodene as a breakthrough treatment. Another is the former Gambian president Yahya Jammeh’s secret blend of herbs, which he announced could cure HIV in 2007. Despite outlandish claims, such as that the cure only worked on Mondays and Thursdays, it was administered to patients. This had grave consequences, including the deaths of those deprived of effective antiretroviral medication during the “treatment”.

With the support of AIDS-Free World and the Gambia-based Institute for Human Rights and Democracy in Africa, survivors are now suing Jammeh in the Gambian High Court for inhuman and degrading treatment among other human rights violations. During truth telling hearings in late-October 2020, the former health minister Tamsir Mbowe stood by his support for Jammeh’s treatment even as he admitted he did not know what the medicine actually contained.

The novel coronavirus now offers its own untested but officially endorsed remedies. In April 2020, President Andry Rajoelina of Madagascar announced that a plant-based tonic, Covid Organics (CVO), was an effective treatment for COVID-19. Scepticism over the claim was countered not with rigorous scientific evidence but politicised rhetoric. Faced with questions, Rajoelina asked: “If it were a European country that discovered this remedy, would there be so many doubts?”

Domestically, the president has sidelined his own national scientific experts. The National Academy of Medicine of Madagascar initially raised concerns about the lack of scientific evidence of the efficacy of CVO. But it subsequently backtracked by sidestepping the issue, classifying CVO as an improved traditional remedy rather than a medicine. Although CVO’s precise formula is unknown, it contains traditionally used plants of the genus Artemisia.

Direct criticism of CVO by regional health institutions has been relatively subdued. Following news of Rajoelina’s claims, the head of the Africa CDC said: “We would be very proud if a solution in this war against COVID-19 comes from an African country, but we must be methodical before approving such a remedy.” The West African bloc ECOWAS issued a statement saying “we can only support and endorse products that have been shown to be effective through scientific study”.

Rajoelina has embarked on an aggressive push to promote CVO, shipping it to numerous African countries including Tanzania, Nigeria, Equatorial Guinea, the Central African Republic, the Republic of the Congo, the Democratic Republic of the Congo (DRC), Liberia and Guinea-Bissau. In October 2020, he announced the development of a new CVO capsules formulation.

While nations like Nigeria and DRC tested CVO and found it to be ineffective for COVID-19, officials in Liberia took a different approach. They suggested testing was not necessary, saying: “Madagascar is an African country…Therefore, we will proceed as an African nation and will continue to use our African herbs”. This response underscores how political considerations can interfere with the proper administration of the response to a pandemic.

In Madagascar itself, CVO is readily available. When officials have been questioned why the country has seen over 17,000 cases and over 250 deaths from COVID-19 despite the treatment, they have blamed the improper use of CVO.

The right use of traditional medicines

Ensuring that medicines are evidence-based, whatever country they originate from and regardless of whether they are rooted in traditional treatments, is not only a matter of good science but of human rights. Many international law instruments, including the African Charter for Human & Peoples Rights, guarantee people’s right to the highest attainable standard of health. This includes the provision of quality medicines that are considered safe and effective.

In explaining the need for testing CVO, the World Health Organisation (WHO) has clearly stated: “Africans deserve to use medicines tested to the same standards as people in the rest of the world. Even if therapies are derived from traditional practice and natural, establishing their efficacy and safety through rigorous clinical trials is critical.” The WHO has also created testing protocols to try to ensure Madagascar complies with international scientific and ethical standards, particularly as concerns have been raised that CVO usage could promote drug resistance to artemisinin-based malaria medicine. However, Rajoelina continues to promote the unproven remedy.

The politicisation of unproven remedies is a global problem, as demonstrated not only by leaders in Madagascar, but from America to Brazil. Wherever governments do not use scientific and public health measures to fight diseases, there is a failure to respect, protect and fulfil the right to health of its citizens. As the WHO and the international community work towards finding an effective cure or vaccine for COVID-19, there also needs to be a stronger stance against promoting unproven medicines. The rights and lives of millions are at stake.

Their husbands abandoned them in labour. So ...

Sarah L. Bosha is an Assistant Teaching Professor in Global Health and Human Rights, and Ethics in Global Health at the Eck Institute for Global Health, University of Notre Dame. She also serves as a Legal & Research Advisor, HIV and Human Rights at AIDS-Free World. Twitter: @SarahBosha. Adam R. Houston is a PhD Candidate in the Faculty of Law at the University of Ottawa, working at the intersection of infectious disease, human rights and access to medicines. Twitter: @HealthLawAdamH.