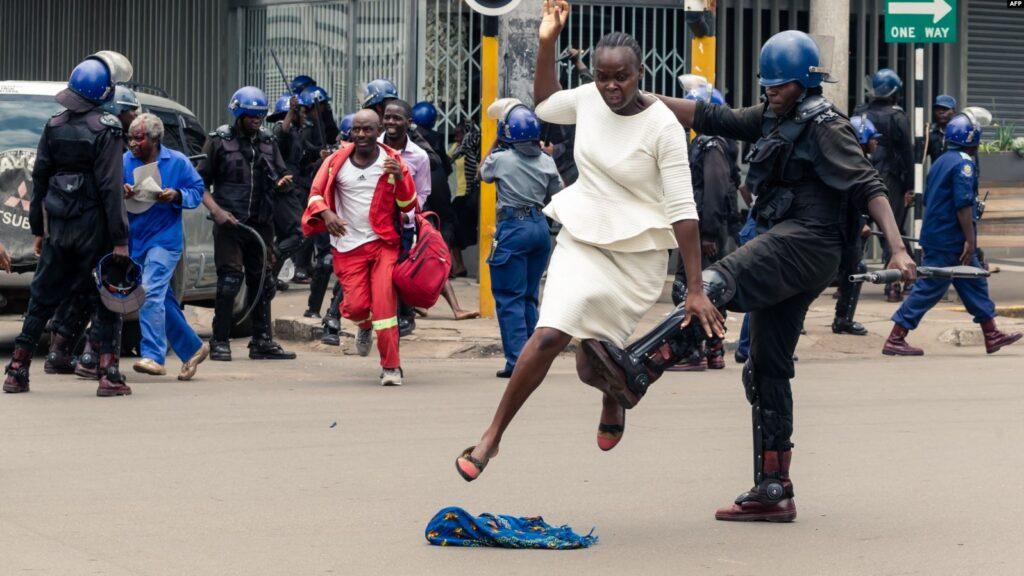 Political violence in Zimbabwe is systematic and gendered. Gendered notions of conquest aimed at keeping women out of politics and intimidating political opponents malign the comprehensive rights – including women’s rights to participate in politics – in Zimbabwe’s constitution. Indeed, Zimbabwe’s ruling party is the prime agent of their destruction.

The mid-May abduction, assaults, and arrests of the three opposition Movement for Democratic Change-Alliance (MDC-A) members illustrate the above assertion. The three women claimed they were abducted at a police road-block while coming from a flash demonstration by the opposition party’s youths during the lockdown; they were then assaulted and sexually violated before being dumped in a rural area close to the capital Harare where they were only rescued 48 hours after the abduction. The ruling party Zimbabwe African National Union Patriotic Front (ZANU (PF)) dismissed and then recrafted their narrative. ZANU (PF)’s propagandists claimed the women staged it all. The ruling party’s more coercive elements continued their persecution through re-arrests and even the subjection of Mamombe to psychiatric examination. This surfaced the gendered nuances of Zimbabwe’s politically motivated violence. It has two goals. First, ZANU (PF) is reinforcing stereotypical notions of politics as a male domain. Women disrupting patriarchy by joining a political movement that resists the men who run the state are severely punished. ZANU (PF)’s second goal, settling scores with the MDC and putting it in a losing place, is in this case meted through women.

ZANU (PF) has a history of abducting dissenting voices in civil society, opposition parties, the media, and educational institutions. In December 2008, Jestina Mukoko, Director of the Zimbabwe Peace project, was abducted by state security agents from her home before being held incommunicado and tortured before being brought to the courts. In March 2015, Itai Dzamara of the Occupy Africa Unity Square campaign was abducted and remains unaccounted for to this day. More recently, a student activist Tawanda Muchehiwa was abducted and tortured by people who were looking for his journalist uncle considered a critic of the state. Feminist theory can add to an understanding of how the violence is framed and instigated politically: it brings the actual meaning and implication of the violence to the surface. ZANU (PF)’s obsession with the three young women leaders demonstrates that such violence is far from spontaneous. It is systematically gendered. Its gendered nature carries deep meaning in the context of political rivalry. Theorising the politics of gendered violence

Amina Mama, Laura Sjoberg and Cynthia Enloe’s work on militarism and violence in conflicts argues that violence intimidates, dehumanises, and emasculates to demonstrate the power of conquest over opponents. It is constructed along gendered notions of masculinity and femininity, including the binaries of man/woman, mate/opponent, conqueror/loser, strong/weak, public/private: the list goes on. Each of the binaries constructs one pole as superior to the other. The superior side carries essentialist notions of masculinity associated with men such as strong, winner, rational, smart, etc. The other carries simplistic notions of femininity associated with women: they are to be weak, emotional, losers, belonging to private space, etc. Such patriarchal – and homophobic – notions thus shape violence along gendered constructions, hence the common use of rape as a weapon of war.

Gendered dynamics of state violence during Covid-19 in Zimbabwe

The violence we have seen being perpetrated by the state in the form of abductions, arrests, and assaults during Covid-19 (the three MDC-A women were arrested for violating Covid lockdown rules against demonstrations) targets real individuals and an imaginary collective. For actual people, the violence follows an all too true logic of intimidating and instilling fear among women and other citizens for speaking out against the state. The perpetual targeting of Mamombe, Chimbiri and Marova shows the sexualised and gendered nature of the violence. They are systematically targeted because of their identities as women.

The state’s sustained efforts to victimise the three young women since their disappearance are targeted at an imaginary collective. The message of emasculation and political conquest is directed to the MDC-A and indeed Zimbabwe’s whole justice system. The state has repeatedly denied the young women’s abduction. ZANU (PF) has gone an extra mile to engage in extrajudicial acts, interfering with the court case trying to construct evidence that the abduction and assault was fabricated. A video of the purported evidence was even aired on the state broadcaster’s, Zimbabwe Television (ZTV), main news show, in early September 2020.  The state’s main newspaper, The Herald, followed suit a couple of days later. A few days further saw Mamombe – on bail and in the hospital – arrested again.

Besides all this illegality, note the gendered nature of this pursuit. Far from accidental or coincidental, this is a systematic effort to bring representations of a ‘feminine enemy’ overpowered by a ‘masculine opponent’ to the real world. The women’s bodies have thus become perfect tools of objectification, projecting the state’s and, by conflation, ZANU (PF)’s desires of domination over the MDC-A opposition: their bodies are used as weapons of violence to send a deep message of political conquest to the contesting party. Thus the young women are also targeted by their ascribed collective identity as MDC-A: the violence is aimed beyond their bodies to their party. ZANU (PF) becomes the strong masculine conqueror of the weak and feminine MDC-A, a logic typical to toxic hegemonic masculinities.

Police officers beat a woman at Magistrates Court in Harare

This case study of the three young MDC-A women leaders and their experience of perpetual state-directed violence demonstrates that politically motivated violence in Zimbabwe is gendered.  State and ruling party abductions and arrests, and their constructions of evidence through extra-judicial means, reveal that political violence is systematic and institutionalised in societal hierarchy. Such practices derail the accelerated gender equality efforts for young women in politics that the Institute for Young Women Development (IYWD) and the broader women’s movement have been promoting – and are recognised in Zimbabwe’s 2013 constitution.

Eritrea’s Role in Ethiopia’s Conflict and the ...

The dangers of playing politics with COVID-19 ...

Glanis Changachirere is the Director of the Institute for Young Women Development and the founding Coordinator of the African Women Leaders Forum. Ms Changachirere is a Member of the Steering Committee of the World Movement for Democracy as well as a feminist and activist. She is a recipient of the 30 Under 30 Democracy Award from the National Endowment for Democracy for her pioneering work on young women’s political participation in Zimbabwe. Ms Changachirere holds a Master's in International Relations (Gender) from the University of Birmingham (UK) and a Master's in Public Policy and Governance from Africa University (Zimbabwe). She can be contacted on [email protected] and @glanyline on Twitter