Almost a year after the World Health Organisation (WHO) told the South African government that the bodies of those who had died of Covid-19 posed little threat of infection to the living, the Ministerial Advisory Committee (MAC) has acknowledged that there is no need to wrap them in plastic or deny grieving families the opportunity to bury their loved ones as custom dictates.

A memorandum issued on 25 January by MAC co-chairs Salim Abdool Karim and Marian Jacobs notes that wrapping the corpses in plastic before burial is “unnecessary” and that simple shrouds may be used instead. It further advises that “the face may be exposed during the funeral proceedings”.

In responding to the MAC’s advice, the Department of Health reported during the last week in January that it was no longer necessary to wrap bodies and coffins in plastic, use biohazard stickers or sanitise the gravesite and mourners’ clothes; and that funeral directors would no longer need to wear full personal protective equipment (PPE).

The new advice to the government comes in response to a spate of exhumations by families distressed that their loved ones had not been buried properly according to tradition under previous harsh rules.

Over the past year, many families have been denied the chance to view the bodies which have been wrapped in multiple layers of plastic, leading, in some cases, to the wrong person being buried. 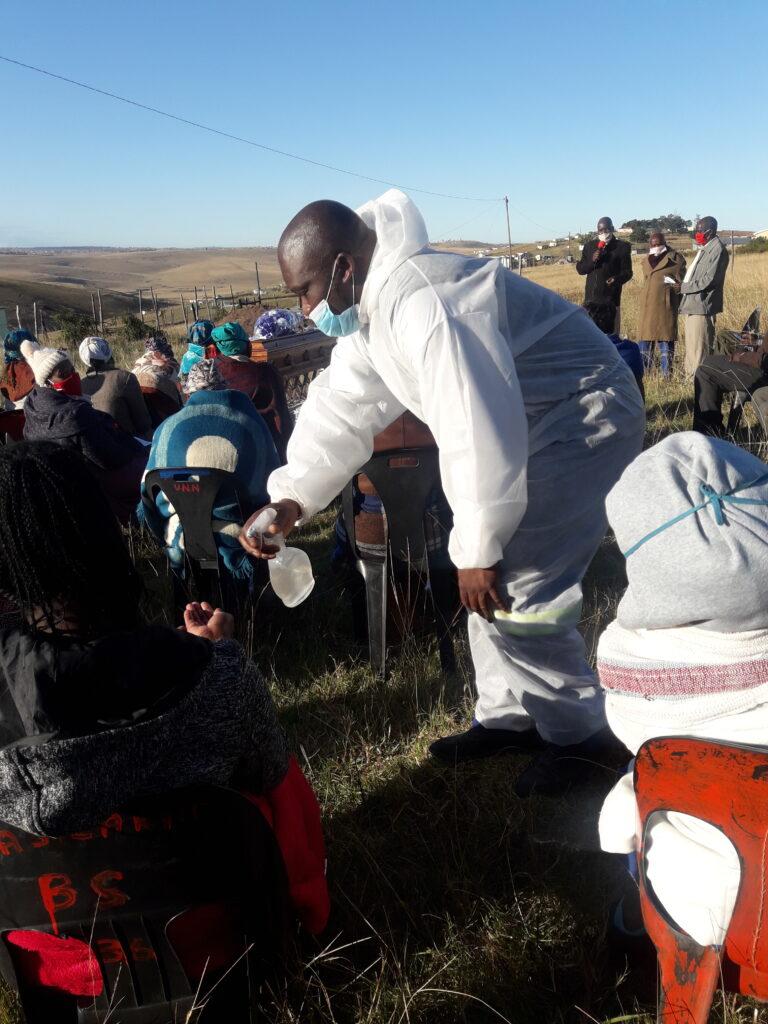 In response, the memorandum notes that the previous rules about encasing dead bodies in plastic contravened “certain cultural practices and beliefs” and had led to graves being dug up and bodies being exhumed and reburied “without approval”.

It emphasises that contrary to popular opinion and previous official guidance issued to funeral parlours, the bodies of those who died of Covid-19 were not contagious after they had breathed their last and released their final fluids.

The advice comes in the wake of widespread concern over the doctrinaire nature of the government’s response to the Covid-19 pandemic, in particular its reliance on lockdown measures which have been described as impractical, as well as socially and culturally damaging.

A study conducted by the Human Sciences Research Council (HSRC) and Walter Sisulu University (WSU) for the Eastern Cape Socio Economic Consultative Council (ECSECC) found that regulations issued under successive nationally declared states of disaster had severely restricted how the bodies of loved ones were handled and buried, which created fear and anguish within local communities.

In rural areas, funerals are occasions at which large extended families unite to bid farewell to the deceased and usher them on their way peacefully and with dignity to the afterlife. In Xhosa culture, if the funeral is not performed meaningfully and the spirit’s smooth passage to the next world has not been guaranteed, the family may need to invest in expensive rituals, including exhumations and reburials, to appease the deceased; and can suffer considerable, long-lasting trauma.

However, under the new rules funeral parlours adopted the practice of wrapping bodies in three layers of plastic, which made it difficult to identify the corpse. They also covered the coffin in plastic. In a number of cases, the wrong body was delivered by the funeral parlour and ceremonially buried before the mistake was realised.

The lockdown rules instituted at this time further prevented bereaved families from being able to commune with kinship and neighbourhood social networks, which undermined local resilience. The study questioned why the measures being promulgated by the government for the handling of Covid-19 bodies before burials were harsher than those advocated by the WHO in March last year.

It further described how they were implemented without any consultation with local communities and against a background of a “moral panic” under which media and government tales of widespread flouting of official lockdown measures at village funerals stigmatised rural populations.

Amid great popular uncertainty about the causes and impacts of the new virus, the climate of fear in the Eastern Cape was exacerbated by the implementation of a hard lockdown, under which police tipped over beer drums at rural funerals and made arrests.

Night vigils on the eve of the burial, when the coffin was often opened in the house to allow close family to communicate directly with deceased, were banned. Plasticised coffins were sometimes delivered quite late on the day of the funeral itself, or left in the open grave in the yard rather than taken to the tent at the main house where family and mourners were gathered.

The HSRC/WSU study found that these actions generated anger and resistance among villagers, who chased away funeral parlour vans, threatening to assault the undertakers for not bringing the deceased to their communities in a respectable state at a proper time.

While some of the screaming that came to accompany the arrival of the undertakers, who were visored and clad in hazmat overalls in the belief they were handling highly contagious bodies, stemmed from dread of the white hooded figures carrying the coffin to the grave.

Local residents reported feeling abandoned by traditional leaders and government officials, who were seen as ignoring their needs and customs, and talked of how the implementation of the new rules on funerals and the handling of Covid-19 corpses was causing great cultural harm and psychological trauma.

Nevertheless, then as now, the government has continued to focus disproportionately on the threat posed by Covid-19 bodies.

In July, Eastern Cape premier Oscar Mabuyane announced that every person who dies in the Eastern Cape would be tested for Covid-19 before their bodies were released to their families. Earlier this month, President Cyril Ramaphosa singled out funerals as lethal events at which people contracted the virus – and subsequently died as a result.

Even the recent memorandum places the emphasis on enforcement, insisting on the presence of a police officer at any vigil where a body is on display, and pushing for enforcement of the law on illegally exhuming bodies.

However, the point – as the present advice also makes clear – is that “transmission at funerals occurs amongst the living”, not a result of contact with the dead, as long as basic precautions are followed. In this regard, funerals pose a similar risk to that of parties, if physically-distancing, mask-wearing and hygiene measures are not followed.

That it has taken almost a year for an advisory body at the national level to note this indicates some of the problems with the government’s approach to the pandemic.

For example, as early as April last year, leading South African social scientists called for greater engagement in shaping the mitigation policies being produced by the Government to manage the spread of the virus.

They noted the absence of the participation of social scientists in the government’s MAC on Covid-19, which initially comprised 51 doctors and medical science academics and focused on producing a “bio-medical fix”. Indeed, the present MAC headed by Karim and Jacobs continues to be dominated by medical professional and academics.

The approach adopted by the Government, which was identified as being modelled on those promoted by states in the Global North, was also criticised as inappropriate for the material, social and political conditions in South Africa.

For many rural residents of the former Transkei, the state’s lockdown intrusion, in the name of public health, into a social and cultural space that had previously been almost entirely theirs, as well as the new general restrictions on movement and communality, were experienced as alien and alienating, according to the HSRC/WSU report.

The feeling was that the government was “closing the gate” (ukuvala isango) within villages, producing atomised responses to the outbreak at a moment when the need for community solidarity to promote resilience in remote rural areas was particularly great.

In this context, the study, which interviewed everyone from traditional and religious leaders and local councillors to nurses, undertakers, gravediggers, the police and the kin of the dead, found that the harsh rules on funerals had been met with significant strategic resistance, with family and community members: At the same time, significant communal responsibility was reported with members of rural communities taking many steps to protect themselves and each other from the Covid-19 outbreak, including by adapting practices around funerals.

Following the submission of the present MAC memorandum, key questions that may be on the lips of rural families and villagers in the Eastern Cape are: Why was the frightening practices of denying the bereaved access to their loved ones allowed to persist, when the WHO had already announced that dead Covid-19 bodies were not infectious? Why did it take a spate of illegal rural exhumations across the Eastern Cape in recent months for the state’s main advisory body on the pandemic to finally pass judgement on this issue?

Meanwhile, the national government remains unsympathetic to the cultural needs of mourners at traditional burials. While lifting some of the PPE and sanitisation requirements, the Department of Health has stated in its response to the MAC’s advice: “The human remains should only be conveyed to the deceased’s home on the day of the burial and viewing is only allowed under the controlled environment within a mortuary or funeral undertaker’s premises.” The department says these measures remain necessary to control the spread of Covid-19 among mourners.

However, this requirement runs contrary to the spirit of the MAC’s advice and the WHO memoranda on which it is based, and the respect for traditional practices that they seek to promote.

An important aspect of customary burials is the night vigil, which is often held at the home of the deceased’s family, and which affords family and community members the opportunity to make peace with the departing spirit of the dead.

Accordingly, the HSRC/WSU report recommended that Covid-19 bodies should be allowed to be brought into the home for viewing and communing before going to the gravesite, at the same time as precautions, such as physical distancing, are taken to protect mourners from potentially infecting each other.

It is a recommendation which, it is hoped, the Department of Health will adopt.

*Leslie Bank, co-author of this blogpost has a forthcoming title in the African Arguments book series with Nelly Sharpley titled: Covid and Custom in Rural South Africa: Culture, Healthcare and the State.

Somalia’s prosperity can only be driven through ...

Mark Paterson is an independent writer and researcher with more than 25 years’ experience as a reporter, editor, communications manager and civil-society activist in South Africa, Britain, and China. He has worked on national newspapers in Johannesburg, London and Beijing and has specialist knowledge in a range of socio-economic policy areas in South Africa and the rest of the continent, including in the fields of higher education, governance, inclusive development, urbanisation, housing, conflict resolution, politics, international relations and media. He has contributed to a number of journals and books, including as the co-editor of Africa and the Millennium Development Goals (Rowman and Littlefield, 2015). Leslie Bank is a research director in the Inclusive Economic Development Unit at the Human Sciences Research Council, South Africa and professor of social anthropology at Walter Sisulu University. He is the co-author of a new volume on South African migration dynamics entitled Migrant Labour After Apartheid: The Inside Story (HSRC Press, 2020), https://www.hsrcpress.ac.za/books/migrant-labour-after-apartheid.