Abiy is known to have strong convictions but also for having a pragmatic streak. To find a path to peace, he will need both. 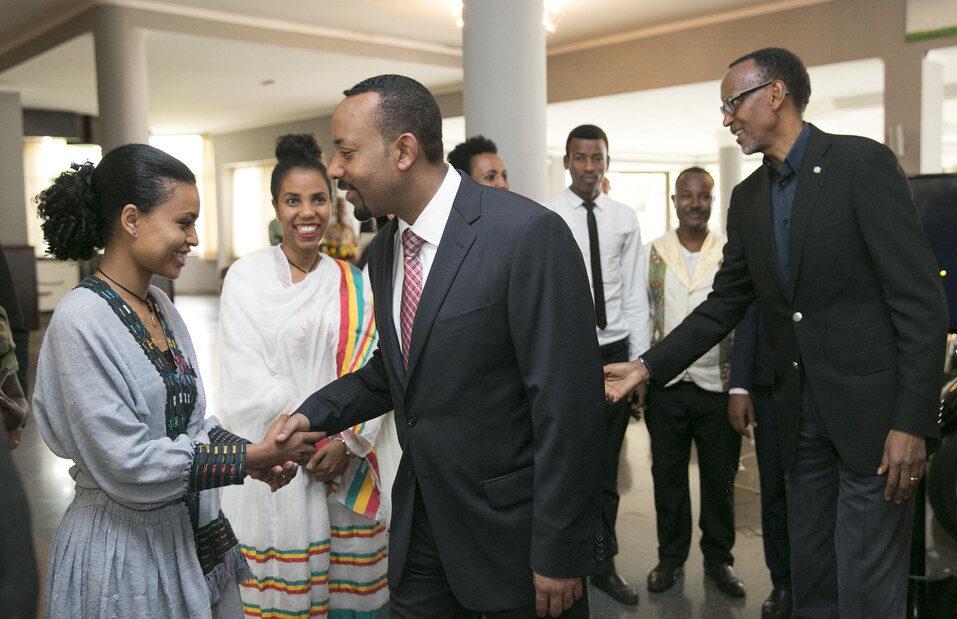 Prime Minister Abiy Ahmed of Ethiopia is known as having strong convictions but also being pragmatic. Credit: Paul Kagame.

On the surface, Addis Ababa appears much as it always has. The streets are full of people, some wearing masks, most not. The roads are full of cars. Businesses are open and busy. Construction continues, at least on some sites. South of Addis, across much of Oromia, life also appears normal. There are one or two police road blocks, but no visible security presence. The towns swarming with bajaj (the ubiquitous small blue three-wheel taxis), even if the main road to the Kenyan border seems less busy than usual.

But up north, the crisis deepens. On top of dealing with a COVID-19 pandemic that still spreads, Ethiopia faces three major political challenges: the situation in Tigray, where conflict and disorder continue; the tension on the border with Sudan; and the national elections due in early June. The next few months could be decisive for the country’s future. What should Prime Minister Abiy Ahmed do?

Of the three challenges, the greatest, grimmest and most urgent is Tigray.

The federal government blames the breakdown in relations solely on the Tigrayan People’s Liberation Front (TPLF) which chose to challenge the central government’s authority and refused to negotiate. Abiy claims that its “law enforcement” operation has effectively concluded. But whatever the proximate causes of the conflict (and there appear to have been mistakes and miscalculations on both sides), the current situation is now a disaster for everyone – for the government, the TPLF, and above all for the people of Tigray. The country’s neighbours, Eritrea aside, are also deeply concerned that the instability may spread.

Reliable reports suggest there is neither security nor the rule of law in many parts of Tigray, and the government is still unable to provide basic services for most Tigrayans who remain, let alone those who fled into Sudan. Humanitarian support is beginning to reach some in Tigray, as the government has advertised, but not enough and not to all areas. Though the government has permitted carefully supervised visits to the capital Mekele by journalists (still at risk of being arrested) and diplomats, it seems that fighting between government and TPLF forces continues elsewhere. Eritrean forces appear to remain present and free to act as they please. The longer this goes on, the more damage will be done, the deeper the polarisation caused, the more entrenched the views of each side, and the longer it will take to resolve the crisis.

Three steps are essential if a peace process is to get underway.

Firstly, both sides must agree to talk to each other as they are. With trust destroyed, both will be tempted to put impossible conditions on the talks – for instance, the resignation of the PM, or the absolute renunciation of violence and the surrender of all weapons. This will create only an impasse. Talks need not start face-to-face, but they need to start between those who currently hold power on each side, whatever the sins of the past.

Secondly, there must be an independent investigation of the alleged atrocities and human rights abuses for which evidence is multiplying (see for example Amnesty’s report on the massacre at Axum). If, as the government originally claimed, there were no civilian casualties, there is nothing to hide. If on the other hand there have been atrocities, the only way to restore credibility and build a basis for peace is to allow them to be investigated and remedial action taken, as was identified at the 15 March RAS meeting on the rule of law in Ethiopia. Peace without justice rarely lasts long.

Thirdly, outside forces, specifically the Eritreans, must withdraw and be seen to have departed. They have no interest in the restoration of peace, order or prosperity in Tigray; on the contrary, there are reports of them looting and carrying off whatever economic assets they can lay hands on. This damages Ethiopia as a whole.

Despite the government’s insistence that this is a purely internal problem, they themselves involved external actors, and an international engagement is probably now essential to help resolve it. With trust between Abiy and the Tigrayans destroyed, a decisive military outcome unlikely, and regional spillover threatening, it will be much easier for a neutral third party to monitor the situation and broker talks. The regional body IGAD appears hopelessly divided (with rumours that Ethiopia, Eritrea and Somalia wish to split off), leaving the African Union best placed to play this role, though its modest resources may require reinforcement from other international organisations such as the UN or EU.

The second challenge, Ethiopia’s deteriorating relations with Sudan, risks regionalising the conflict. Ethiopia blames this on Sudan’s failure to “mind its back” during the Tigray operations, refusing to close its border to fleeing Tigrayan refugees, and moving its own armed forces up to disputed border areas at Benishangul-Gumuz and Al-Fashqa, where Amhara settlers have farmed for many years.

This has implications for the continuing tensions over the Great Ethiopian Renaissance Dam (GERD), with Ethiopia and Egypt still in dispute over the terms on which filling will resume once the rains start in May. A closer alliance between Egypt and Sudan since the fall of Omar al-Bashir in 2019 changes the balance in the Nile Basin, and means border problems and GERD negotiations may become entangled. On both counts, Ethiopia would be wise to avoid escalation. However appealing it is nationally to “stand up to foreigners”, to precipitate fighting on a second front would be deeply destabilising within Ethiopia as well as the region. Again, the AU and UN can help – but they have to be allowed to do so.

Thirdly, the election, postponed from last year (one of the points of contention with the TPLF), is now set for 5 June this year. Its conduct and inclusiveness will be a critical test of Abiy’s commitment to pluralism, diversity and reform. This was the platform he espoused when he came to power in 2018, along with releasing political prisoners and transforming the ruling coalition known as the EPRDF into the singular Prosperity Party (PP). These commitments have been questioned in the face of both the action in Tigray and the incarceration of leading Oromo opposition figures. Last year’s assassination of the Oromo singer Hachalu Hundessa, and the hunger strike (now ended) by the imprisoned Oromo leaders including Jawar Mohammed, added to the political tension in that critical region. Despite the year’s delay, preparations for the elections also seem to be behind, with registration still to be done and hardware put in place.

Abiy has a choice: to allow free elections and live with the consequences, which may include a significant presence of opposition in parliament even if the Prosperity Party win; or he can try to “manage” the process to give himself an overwhelming majority. In some regions, such as Amhara, the PP is likely to win easily. In Tigray meaningful elections look impossible by June. But the key is Oromia, where Abiy needs to make his case and secure a genuine majority in a free election if his government is to have national credibility.

The Prime Minister is known as a man of strong convictions and firm opinions. But he is also capable of pragmatism. To find a path to peace, prosperity and stability, he will need both: to face down those inside and outside the country who are benefitting from Tigray’s suffering, to allow the elections to take place freely, and to find a new balance between the regions and the centre that will be acceptable to all Ethiopians.

Change Will Come from Us: A Conversation ...