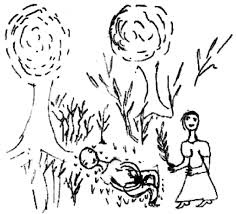 Scene of labia elongation. From Bodily Integrity and the Politics of Circumcision

Discussions about genital modification practices are sites of ideological (dis)agreements. They are typically wavering between those who understand body modification as an unacceptable infringement of people’s sovereignty and frame the discussion in relation to sexual and health rights while, on the other hand, others caution against dominant Western perspectives in the rights approach that understand such practices mostly in relation to disease and danger, overlooking people’s own motivations and understandings. Another strand of debate cautions against the tendency to reduce these practices to mere markers of specific cultural identities. I would like to add a different dimension to these debates by raising concern about the limitation of heteronormative framings which ignore the queer potential of some of these practices.

I explore the arguments of ethnicity and heteronormativity in the context of labia elongation which involves girls and women individually or mutually pulling their labia minora to visible extended lengths. It is common to study and analyse labia elongation using the concept of heterosexual matrix, which articulates heterosexuality as stable and natural and as made up of two genders, and through which we are made to understand this practice as a heteronormative practice. However, parallel to the heterosexist discourses is the fact that labia elongation is a decidedly homosocial practice where women teach, assist and share. There is thus a hidden or under-examined queer potential of labia elongation especially if we attempt to understand this practice from the lenses of female-female pleasure.

Some see labia elongation as quite central to particular ethnic or cultural constructions of femininity, although other study findings suggest that not all women from these ethnic groupings feel obligated to engage in this practice. Yet the practice has persisted in some parts of Africa because of the price women pay for non-conformity when they are ridiculed, insulted, and ostracised by both women and men for failing to undergo elongation (Larsen 2010). In a study I conducted in Harare, Zimbabwe in 2015 on the significance of labia elongation in the lives of young urban and middle class women and men, the women without elongated labia were denigrated especially by other women for being “incomplete”. In metaphorical Shona (language) expressions, such women were likened to gomba (a hole), mugomo wemvura (a bucket of water), or imba isina mukova (a house without a door). For example, one woman remarked that, “varume havangode zvekupinda gomba nekuti zvakafanana nekurara mumba isina mukova (men do not like just entering a hole because it is almost like sleeping in a house without a door).” Another said the presence of elongated labia ensures that “entry is not very easy so that when he is thrusting he doesn’t feel as if he is thrusting a bucket”. These powerful metaphors suggest that without elongated labia, the vaginal opening is presumably too wide for a man to enjoy penetration, which articulates ideas of good women and wives as guarantors of sexual fulfilment.

Whereas studies on labia elongation in other countries link the practice to specific ethnic groups (e.g. Baganda women in Uganda or Basotho women in Lesotho), my findings revealed that, in Zimbabwe, the practice now transcends and blurs ethnic boundaries. Initially, I was only interested in establishing the relevance of labia elongation among the Shona ethnic group, who form the majority of the Zimbabwean population. While my assumption was that the practice would not be of much significance to the young people in urban areas, I was greatly surprised that most of the young women who participated in my study had elongated their labia with instruction and or encouragement from aunts, mothers, and peers. This is despite the fact that most of the participants associated the practice with migrant communities from neighbouring countries such as Malawi and Mozambique, some of whom are now providing labia elongating services and herbs to interested women for a fee. The study also revealed that Ndebele women in Zimbabwe, who were never associated with the practice were also now engaging in the practice. Bridal showers and kitchen parties emerged as key urban platforms that were used to promote the practice as a requisite for every woman, but in particular married women. In essence, labia elongation in Zimbabwe has shifted from being a gendered cultural signifier as part of a larger cultural infrastructure to a female practice which every woman should supposedly embrace to accentuate her sexuality.

Although women claimed that the failure to elongate one’s labia contributed significantly to promiscuity by many husbands, the majority of male participants in my study could not substantiate these claims. In one of the group discussions with men, I asked if the absence of elongated labia on a woman could drive them to look for other sexual partners. Resoundingly, they said no and one of them exclaimed in the Shona language that, “murume chaanoda ipoto. Poto, ine mibato kana isina, poto ipoto!” which was a metaphorical expression that literally translates to “what a man wants is a pot. A pot, with or without handles, a pot remains a pot!” In this instance, poto (pot) signifies the vagina, distinguished by having elongated labia (handles) or not.

Nonetheless, among women the benefits of the practice were always automatically linked to the enhancement of male sexual pleasure, with glaring silences about the link between labia elongation and female sexual pleasure in my conversations with both men and women. It took a lot of probing for women to speak about labia elongation from the perspective of their own sexual pleasure, and when they did, it was very brief as they would quickly reaffirm that they were doing it to please their male partners sexually. Even though for some women the elongation of labia meant enhancing female sexual pleasure, ironically, they posed this as a problem. During a discussion about how long elongated labia should be, one woman said “it becomes a problem when pulled labia becomes too long because they bring a lot of [sexual] feelings.” Because of this, she added that, “girls are discouraged from pulling beyond the normal size, since that would cause a lot of sexual feelings that you even fail to control yourself.” Thus, women’s anxieties to speak about their own sexual pleasure and desire could stem from popular discourses that stigmatise women (not men) who are deemed overly sexual or as deriving too much pleasure from sex.

The analysis of labia elongation from a heterosexual matrix undoubtedly helps us to better understand the practice, but stepping out of this heterosexual lens also means revealing new critical questions. For example, exploring this practice in the context of same-sex female erotic practices would draw attention to the significance of elongated labia from the perspective of women in lesbian sexual encounters or women who have sex with women. To what extent, for instance, does labia elongation feature as an important practice that is linked with female-female sexual pleasure? We also need to acknowledge that the practice itself occurs in a context of female homosociality, characterised by some same-sex practices which may range from sharing of information to mutual pulling of the labia. The possibility that heterosexual girls or women may derive pleasure when puling each other’s labia in some ways blurs the explanatory power of the heterosexist frame dominantly associated with the practice of elongation. As Mupotsa (2020: 394) contends, the ritual practice of labia elongation “presents opportunities for a different relation to sexuality for women, principally because of the homoerotic and autoerotic techniques of the practice.” This points to arguments by Manning (2014) and Nyanzi (2014) that heterosexuality has the potential to be queered, because in this case labia elongation, normatively associated with heterosexual unions, may in practice also be embraced in same-sex (non-lesbian) female practices as well as in lesbian unions. Therefore, broadening the analytical frames through which we understand labia elongation is likely to offer alternative trajectories that go beyond endorsing it simply as a normative heterosexual practice.

The discussions I have presented about labia elongation as an embodied and gendered practice have attempted to challenge simplistic and hegemonic representation of homosexual and heterosexual practices (and people in these categories) as stark opposites with nothing in common. Paying attention to the spatial and temporal dimensions of labia elongation can help illustrate the nuances within this practice because on the one hand it seems to represent the heterosexual norm, but on the other hand it shows its potentiality for female-female sexual desire and pleasure.

The Tale of Eritrean Withdrawal from Tigray: ...

Hellen Venganai a Lecturer in the faculty of Social and Gender Transformative Sciences at the Women’s University in Africa. She holds a PhD in Sociology from Stellenbosch University. Her research interests revolve around gender, sexuality, culture, postcolonial studies and development policies. She can be contacted on the following email address: [email protected]