Death by a thousand cuts: Cameroon struggles in fight against separatists

Despite government claims that the Anglophone conflict is under control, recent developments suggest otherwise. There’s only one way out. 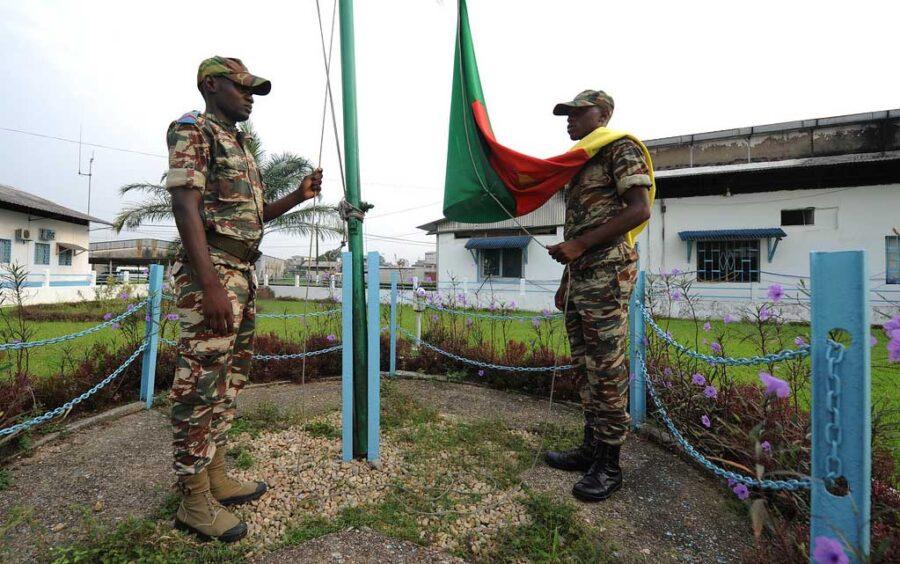 The Anglophone regions’ relatively quiet start to 2021 was shattered in March by an intense series of IED attacks. Marking a new development in the Cameroonian conflict that has simmered for four years, at least one harrowing new video emerged every day. Each showcased the same pattern: the lumbering roll of a military convoy down a muddy forested road; the explosion underneath a lightly armoured Toyota; the immediate covering fire laid down in anticipation of an ambush; and, eventually, a silence punctuated by the cries of the wounded.

Improvised explosive devices (IEDs) have been used by separatists in the Anglophone conflict since at least late-2018, but the tactic has now reached maturity. Extensive video evidence reveals increasingly sophisticated use of the explosives, including the deliberate targeting of the army’s least protected vehicles, remote detonations, and the use of multiple IEDs. These attacks have been more frequent, more deadly and, most importantly, have not stopped.

This is potentially devastating for the military. Cameroon has only a limited number of mine-protected armoured vehicles and so soldiers are largely left to patrol in Toyota pickup trucks with improvised armour that is entirely ineffective against IEDs. Western forces learned similarly painful lessons in Afghanistan and Iraq, with ‘Snatch’ Land Rovers referred to as “mobile coffins” by troops.

These attacks must weigh heavily on the morale of Cameroonian forces, and recent reports suggest that some units have resorted to extreme measures to counteract the threat. It has been alleged that the elite Rapid Intervention Battalion (BIR) has forced civilians to act as human minesweepers near Kumbo, Northwest region, in what would clearly be an egregious abuse of human rights.

The military is known to have defused dozens of IEDs, but the threat remains. It is therefore likely the government will look to acquire new armoured vehicles this year, with Cameroon’s contingent in the UN mission in the Central African Republic receiving several Mine-Resistant Ambush Protected (MRAP) vehicles in May.

This increase in IED attacks fits into a broader pattern of some separatist groups’ growing combat strength. Larger forces such as the Ambazonian Defence Forces (ADF) and Ambazonia Restoration Forces (ARF) have managed to replace their locally produced hunting rifles with more effective firepower. Over time, they have acquired weaponry from multiple sources such as corrupt or sympathetic local officials and military personnel, dealers and allied groups in neighbouring Nigeria, following attacks and ambushes, and even from the diaspora in the US. Most recently, secessionists have acquired several light machine guns and, for the first time, rocket-propelled grenade launchers (RPGs).

This has marked a step-change in rebels’ offensive capability and has led to deadlier attacks. In early-May, it was reported that 24 soldiers and civilians had been killed by IEDs in the previous two weeks. In late-June, ten soldiers were killed and a gendarmerie post was attacked in South West region in one day. Two recent raids by ‘General No Pity’, a feared commander of the Bambalang Marine Forces, at Galim in the West region and Bamali in the North-West left several soldiers dead. In July, grisly footage showing members of a separatist group celebrating around beheaded military personnel was released. And an attack in Bali on 19 July left five senior policemen dead.

Since March, it seems that around 60 to 80 service personnel have been killed, with many more wounded. This would likely make it the deadliest period for government soldiers since the crisis began. Separatist attacks have been particularly effective in the North West region, where large armed factions are believed, at times, to be working with some degree of cooperation, though not quite in harmony. In the South-West, by contrast, fighting between separatist factions remains common. In late-June, for instance, the Fako Mountain Lions killed ‘General Opopo’, a commander of the rival SOCADEF group. Disunity and distrust among secessionists in most areas, which is exacerbated through online attacks among separatist leaders in the diaspora, remains a yoke around the neck of the campaign for Ambazonian independence.

The government’s line that the Anglophone crisis is an internal matter that is under control or has even been resolved is miles away from the current reality. There have been widespread losses of personnel and equipment recently, and the military even briefly deployed the Armoured Reconnaissance Battalion (BBR) to the region. This move neither projects strength nor suggests a military nearing victory.

That said, the separatists’ recent successes are unlikely to alter the long-term trajectory of the conflict. The kind of turnaround witnessed in Ethiopia’s Tigray region or Afghanistan is not going to be repeated; Cameroon’s separatist groups are not on the verge of capturing Bamenda or Buea. Instead, the conflict risks leaving the Anglophone regions frozen in time for a generation amid a desperate quagmire in which neither side can prevail, and as the international community looks on. Meanwhile, the military continues to recruit heavily, limiting the strategic impact of the increasing losses. As the conflict becomes ever more entrenched and intractable, resolution becomes harder to imagine. The North-West and South -West regions risk becoming to Cameroon what Kivu is to the Democratic Republic of Congo.

A common phrase heard about the Cameroonian government is that it feels “time is on its side”. From the perspective of the insular, highly centralised regime, this may seem logical. Yet to other actors, it reads as a potentially fatal miscalculation. Time is not on the side of the 1.1 million children out of school or the 3 million residents of the Anglophone regions caught in the crossfire. Nor is it on the side of the 88-year-old President Paul Biya, whose 38 years in charge make him the longest-ruling non-royal leader in the world. His rule is likely to come to an end in the next election cycle, and a transition of power for such a long-standing regime is fraught with the highest risks imaginable.

Cameroon already faces immense challenges with the fight against Boko Haram in the Far North, a tense security situation on the Central African border and thousands of associated refugees, and the immense humanitarian pressures created by all of these separate crises. The strain on the Cameroonian state is enormous, and without a change in strategy, Biya’s forthcoming transition will rightly set alarm bells ringing across the world.

After nearly four decades in power, the greatest legacy the president could leave behind would be to bring the full weight of the state to the table in pursuit of a negotiated, sustainable end to the Anglophone crisis. The alternative is more smouldering armoured vehicles, soaring humanitarian need, and an increasing flow of coffins draped in the Cameroonian flag. As always, the power is with President Biya and his government, yet it is those in Anglophone Cameroon that are paying the heaviest price.

Billy Burton is a graduate student at the Fletcher School of Law and Diplomacy. He has worked extensively on the Anglophone Crisis for a number of years. He specialises in investigations using digital evidence.