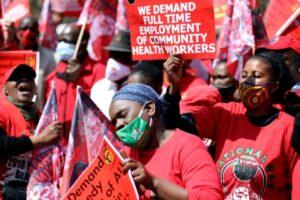 Mid-July 2021: I heard police sirens and helicopters through the night responding to the looting of our local liquor store. After former President Jacob Zuma was arrested that month, over 20 transport trucks were attacked and set alight in KwaZulu-Natal (KZN) and shopping centres were looted across Durban and Johannesburg. This unrest appears to have been instigated by a small group of people loyal to the former President who sought to destabilize the country to further their own political goals.

However, the rapid mobilization of thousands of ordinary citizens suggests it was fuelled by underlying popular discontent. I walked to the shopping area of my inner-city suburb of Durban where looting was ongoing. There were people of all ages participating, but like other incidents across KZN and Gauteng it was overwhelmingly young people carrying bags and pushing shopping carts of groceries and other goods appropriated from local businesses. I spoke with a young man loading cases of beer into a minibus in front of the ruined liquor store and asked him if he thought the outburst was due to Zuma’s arrest. He told me it was more about the toll that Covid-19 lockdown restrictions had taken on people like him: ‘They’re upset about it. I’m upset about it.’

The widespread participation in the looting was bolstered by crises of unemployment, economic insecurity, and racial inequality which were only exacerbated by the Covid-19 pandemic. In South Africa’s third decade of democracy, discontent with the political status quo has fostered impatience with the ruling ANC among a segment of black youth, leading to greater opposition from rival political parties and burgeoning social movements, such as #FeesMustFall, that speak to black youth’s aspirations for upward social mobility and upliftment of their communities that were disadvantaged under apartheid.

I originally began my doctoral research by interviewing activists that were drawn to the Economic Freedom Fighters (EFF), a political party which identifies as ‘Marxist-Leninist-Fanonian’ and has advocated for nationalization of strategic sectors of the economy and expropriation of land without compensation to benefit the black ‘nation’. However, my interviews with young people living in working-class areas of Johannesburg, Durban, and Rustenburg uncovered many more who had lost faith in the democratic political system’s ability to improve their lives. Struggling to find electoral solutions to the challenges they encountered, this cohort were more likely to focus their energy on grassroots protests seeking piece-meal improvements to local infrastructure while ‘hustling’ to make a living for themselves. While the EFF seemed to offer a vehicle for their frustrations, many young people still felt that they did not have a political voice to influence the direction of their country.

A political party for the youth: the rise of EFF?

The EFF contested their first national election in 2014, led by Commander-in-Chief, Julius Malema, who had been expelled from the ANC for his opposition to the then sitting ANC President Jacob Zuma two years prior. Even though the EFF received just over 6% of votes in the 2014 election, they played an outsized role on the national political stage by vociferously demanding changes in parliament. They grabbed popular attention by wearing red berets and domestic workers uniforms. These sartorial choices were intended to symbolize a connection to the working-class black majority. The EFF continued to attract attention over the next few years with their #PayBackTheMoney campaign against President Zuma, which led to their MPs being violently removed from parliament on several occasions after being accused of breaking parliamentary decorum.

The core of the EFF, founded in 2013, was formed from disgruntled members of the ANC Youth League with allegiances to Malema. In my interviews with local EFF activists, I found that many came from leftist social movement organizations, which included black nationalist organizations, and mining unions like those targeted in the 2012 Marikana massacre. While the leadership of the party remained in the hands of Malema and other former ANC members, their calls for land reform, nationalization of resources, and ‘jobs and service delivery now’ attracted many young activists from organizations that had similar goals and ideologies.

A former organizer for the black consciousness-inspired September National Imbizo explained to me that he saw no other option but to join the EFF at that time: ‘Julius [Malema] gave us a lot of headaches because at the time we used to say he is appropriating our … radical politics about land expropriation, nationalization.’  Some of these activists have since left the EFF. Corruption scandals have provoked scepticism about the commitment amongst party leadership to improving the lives of ordinary citizens. Nonetheless, since its formation the party has continued to attract young people with ambitions to be involved in national and community politics.

In 2017, I interviewed members of an EFF branch in the Durban township of Umlazi that was mostly comprised of men and women in their twenties who felt alienated from the local ANC branch which controlled their ward. Many young people who were active in the EFF felt that the new party gave them opportunities to ‘be heard’ in local politics in a way that the ANC, dominated by voices of older, entrenched politicians, never had.

The most dramatic growth of the EFF was at universities. When I started interviewing these EFF student activists on campuses in KZN and Gauteng provinces in 2016, they had not been able to win any Student Representative Council (SRC) elections but were gaining momentum with their active role in the #FeesMustFall, #OutsourcingMustFall, and #RhodesMustFall protests that shook campuses across the country in 2015 and 2016.

These movements sought fundamental changes in educational institutions and the broader society which aligned with the EFF’s advocacy of radical measures to uplift the black majority. An EFF leader at Wits University in Johannesburg explained to me why the party’s brand of politics appealed to her: ‘Transformation is taking what’s there and improving it. I don’t want what’s there. Decolonization is about just scrapping everything and starting from the ground up. As a black individual I just feel it can’t be fixed. It’s just not for me.’ EFF activists were drawn to the party because they felt that its policies of land expropriation without compensation and nationalization would re-orient the state for the betterment of the black majority.

In the years following the eruption of the #Fallist protests, the EFF won dozens of SRC elections across the country, even in provinces where the EFF was weak, such as Western Cape, Eastern Cape, and KZN. EFF leaders from the Durban University of Technology (DUT) in 2016 explained the difficulty of organizing and booking meeting spaces because of the dominance of the ANC-aligned SASCO on campus. However, by the time Malema addressed students at DUT during the 2019 election campaign, the EFF had decisively taken over the SRC and drew hundreds of cheering students to the event, massively outnumbering the dozen or so ANC supporters that watched on with disapproval.

Those 2019 national elections saw the EFF’s share of the vote increase from 6.4% to 10.8%. They were the only of the three major parties that increased their votes from the previous election. In 2014 their bastions of support were in Platinum Belt mining communities such as Marikana, and peri-urban townships in Gauteng and Limpopo populated by Malema’s Sepedi ethnic group. By 2019 the EFF’s presence on campuses gave them visibility in parts of the country where they did not previously have significant support. For example, their biggest gains came in KZN where their vote share grew from 1.9% to 9.7% to become a credible opposition party in the province. It is difficult for opposition parties to gain the trust of the people, but on campuses, EFF student activists found it easier to gain supporters by advocating for basic issues faced by students, such as funding, housing, and access to sanitary pads. These EFF student activists bolstered the necessary ground forces for door-to-door campaigning in black communities that had been dominated by ANC partisans.

The ANC retains a high degree of loyalty among black South Africans, young and old. However, the EFF has emerged as a viable political home for young black political activists, especially those espousing the goal of ‘radical economic transformation’ who do not see the ANC as a credible vehicle. By increasing their presence in parliament, the EFF has also helped to reshape the demographics of this institution, with 30% of their MPs under the age of 40 compared to 15% for the ANC.

Despite the inroads the EFF made among young black South Africans, the ANC remains the dominant party among this key demographic. The historical legacy of Nelson Mandela and the liberation struggle instilled a degree of loyalty to the ANC among many of the youth in working class black townships in Johannesburg. Many expressed concerns that the EFF was too violent, racially exclusive, and part of the same corrupt political culture they identified within the ANC.

I had expected that the new competition between the EFF and the ANC would reinvigorate youth political engagement. Instead I found many more young people continued to feel alienated from the entire political system. Political corruption scandals, persistent unemployment, and inadequate service delivery led many young people to feel that formal politics, whether embodied by the ANC, the EFF, or the Democratic Alliance, had failed to improve their living situations and prospects for upwards mobility.

These sentiments have been reflected in the increasing rates of electoral abstention among South African youth at the national level. In the communities where I conducted research, there were widespread sentiments that there was no positive ‘development’ coming from any of the political parties.

A 39-year-old woman living in an informal settlement in Soweto who was unable to find a job and lacked proper sanitation services explained: ‘the thing is we don’t trust them; we don’t know who to trust’. In the mining town of Marikana on the country’s lucrative platinum belt, a 22-year-old woman told me she did not vote ‘because there’s no change in South Africa. Why vote? People have been voting for years but we still have these roads that have potholes. They voted last year there. See, there’s no change’.

While the scale of the looting that took place in July 2021 is unprecedented, it is yet another expression of the simmering discontent that has fuelled community protests (and occasional instances of xenophobic violence) for at least 20 years.

On November 1, 2021 local government elections being held across South Africa will be an indicator of whether any political parties are able to encourage the participation of young people, or if the ‘born free’ generation will continue to show less commitment to formal politics than those that preceded them.

Not for the first time in South Africa’s history, huge numbers of young people feel like they’re locked out of processes of political change. In a country that, more than perhaps any other, has been shaped by young people’s activism, it remains to be seen what the effects of this will mean for today’s party system.

Don’t be fooled, the biodiversity crisis is ...

Based in Durban, Michael is a PhD Candidate in Political Science at the University of Toronto whose research looks at political participation in contemporary South Africa.