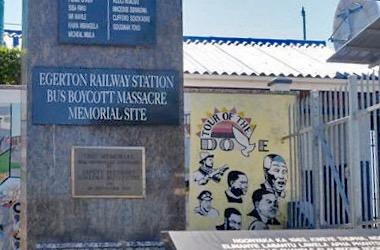 Mr Hlabe[1] is in his seventies now and has lived in Mdantsane township just outside of East London, a city in South Africa’s Eastern Cape province, for fifty years. He spoke with sadness about how isolated he felt from his community; how he felt lonely and rejected from his own people. ‘Even our friends would turn their backs on us and say “sorry guys, this thing you have is like a fever, it is contagious and we don’t want to catch it.”’

Mr Hlabe was not talking about Covid-19. These are his most striking memories of living through apartheid as an activist in the 1970s and 1980s: a sense of profound loneliness, a feeling of being marked as a source of contagion in a time of fear. What is it like for someone like Mr Hlabe to experience the eerily similar forms of isolation, surveillance, and community distrust that comes with 2020’s Covid-19 lockdown?

Our research with former anti-apartheid activists has shown that South Africa’s Covid-19 lockdowns have triggered vivid memories of the horrors of apartheid. In a society that continues to deal with the ravages of the past, collective trauma is a serious problem. This is no surprise, as the state has failed to remedy history’s socioeconomic injustices and continues to perpetrate violence against non-white communities (Steinberg 2015). In a recent essay, anthropologist Paul T. Clarke (2021) states that South African police ‘killed roughly three times as many people per capita as American police’ in 2018. Since we know that those who endured the traumas of apartheid are more likely to experience mental health disorders later in life (Kim et al. 2020), we can hypothesise that public health measures mimicking the tools of apartheid would exacerbate these problems.

South Africa has faced huge challenges in responding to the pandemic. The ability to stay at home and socially distance is non-existent for township residents who live in cramped quarters and lack basic sanitation services. The government’s initial response to the pandemic was severe: South Africa initiated one of the world’s strictest lockdowns on March 27, 2020. This included a controversial ban on the sale of alcohol and cigarettes, interprovincial travel, outdoor activities, and a nightly curfew. It also meant the deployment of 73,000 National Defence Force troops. President Cyril Ramaphosa was praised by the international community for this decisive action, but news and social media reports of police brutality raised questions about both the short and long-term impacts of these actions (Allen and du Plessis 2020). In the initial seven days of the lockdown, more than 2,000 people were arrested for infractions. By June 2020, that number was over 230,000 (Trippe 2020). In some cases, people have even been killed (Rampedi et al. 2020). The economic ramifications of the lockdown have also been huge, and have been felt hardest by those who were already most vulnerable.

We have been working with a group of people who were part of the Ciskei Bus Boycott in the 1980s. They are residents of Mdantsane, a township created in the 1960s within the then Ciskei homeland as a labour reservoir for East London (Parnell 1993). A parastatal transportation industry with state subsidised buses maintained this segregation, but fares were increased frequently. On July 18, 1983, residents organised a boycott to protest an 11% fare increase. The boycott lasted several years and involved Ciskei security forces and state-aligned vigilantes violently targeting protestors; on August 4, police opened fire on protestors about to board the train at Egerton Station, killing 11 people and injuring 36. Much like this period, the Covid-19 lockdowns have temporarily denied freedom of movement to residents, who have experienced curfews and a near-constant police presence. More than half of the individuals we spoke with tied the experience of living under the lockdown to apartheid – without prompting.

Mr Tembo is now in his seventies and has lived in Mdantsane for forty years. He worked with dangerous chemicals at an East London factory under an abusive white boss for decades, and now suffers from chronic respiratory ailments. For someone who was subjected to surveillance, prison, and torture, the lockdown has been particularly upsetting. ‘Everything that is happening that is related to Covid-19 does remind me of the time of apartheid when there were curfews and so on, but it puzzles me how we will deal with this disease without those measures.’ While he expressed anger with the failings of the current democratic government, he clarified that life was far worse under apartheid and that his memories of those days were painful to think about. ‘The torture that I experienced during apartheid caused me a lot of trauma to the extent that even now I’m still suffering. It is keeping me from having peace in my life.’ Mr Masiza was also a victim of apartheid-era violence, arrest, and prison; he said the Covid induced lockdown in his neighbourhood involved ‘a lot of police and army presence – they were all over. It was really heavy and it reminded me of the times of apartheid. During apartheid you could not be in the streets late or you would be arrested. That is how this lockdown felt.’ Similarly, Mr Mxenge was a victim of forced removals meant to create white-only areas during apartheid, and he said the lockdown ‘was exactly the same, but the only difference is that this time it was to save lives, and not the other way around.’ Mrs Lumko, a retired teacher in her sixties who was a participant in the bus boycotts, said the lockdown made her feel like she was in prison.

Interestingly these traumatic connections do not dissuade most people from supporting the government’s decision to surveil its citizens through harsh and even violent means. Almost everyone we spoke with said the government should be able to temporarily suspend people’s rights in the interest of public health. This is especially poignant given the recent protests of ‘government overreach’ in the United States and elsewhere. Those who have experienced the systemic removal of basic rights based on immutable characteristics like race see this moment through a very different lens than those who have not had such experiences. Despite the fact that Mr Hlabe was shot at during the bus boycotts and endured great suffering, he believes ‘the government has the right to take our liberties because it is their responsibility to protect citizens and ensure their safety.’ Many people see the sacrifice of their everyday freedom of movement as a reasonable price to pay for the wellbeing of their community. Nonetheless, we contend that these attitudes are a testament to the normalisation of surveillance as a mechanism of state power in contemporary South Africa (Foucault 1979).

The painful memories of apartheid and violence of the lockdown should call on governments to consider other ways to protect people’s wellbeing outside of policing and state surveillance. We can see models of this if we look back to South Africa’s HIV and AIDS crisis, one that anthropologist Alex de Waal has called a form of ‘democratic public health’ because of its embrace of human rights and use of civil society channels instead of authoritarian tactics. If populations that have endured long histories of state violence describe the logics of public health programmes in Foucauldian terms of surveillance and control, it demands a need for similar alternatives. At the same time, we understand the widespread support for lockdown policing measures among apartheid survivors as a testament to communal understandings of rights and their ties to the public good. While these individuals fought for their freedom, they define such freedom as imbued with limits and situated within larger communal relations. Increased awareness of this ideological framing around communal identities, coupled with greater attention to legacies of trauma and economic marginalisation, can lead us to public health policies that utilise local knowledge and better fit people’s realities without retraumatizing historically oppressed populations.

[1] All names have been changed to protect participants’ privacy.

Allen, K., and A. du Plessis (2020) ‘Africa’s heavy-handed lockdown policing must not become the new normal’, The Guardian, May 1.

Amber R. Reed is Assistant Professor of International Studies at Spelman College in Atlanta, Georgia. She holds a PhD and MA in anthropology from the University of California, Los Angeles, and is a graduate of Barnard College in New York City. She has been conducting ethnographic research in South Africa since 2009, and is the author of Nostalgia after Apartheid: Disillusionment, Youth, and Democracy in South Africa (Notre Dame Press, 2020). Ziyanda Xaso has a Master’s Degree of Social Science in African Studies from the University of Fort Hare and a passion for social change. She is currently working in the nonprofit sector in the Eastern Cape.