Post-Pandemic Cooperation between Africa and Europe: Five Ways to Improve the Partnership on Migration and Mobility 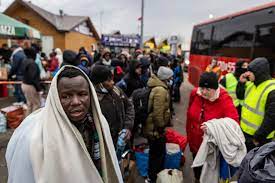 Russia’s invasion of Ukraine has laid bare the glaring double standard in the European response to refugees fleeing wars. Refugees and migrants from non-European countries, particularly those from the Global South (Africa, Asia, Middle East), face racial discrimination and xenophobic attacks while fleeing wars to bordering European countries. The stark differential response can partially be attributed to the country of origin of the asylums seekers. African Union and African leaders have strongly condemned the discriminatory treatment of African migrants and asylum seekers by European countries.

Such a discriminatory approach in European migration governance does not bode well with the Joint Vision 2030 that the recent Sixth African Union-European Union Summit in Brussels on 17-18 February 2022 sets out. The Joint Vision pledges a renewed and deeper AU-EU partnership, including migration and mobility. However, with the recent discriminatory response of European states to African migrants, the pledges of the Joint Vision look more distant. The need for a paradigm shift from pledges to implementation becomes urgent. Given that the attention is diverted to the situation in Ukraine, realizing these shifts require new thinking, resources and political will on the side of Europe.

How can warm words be turned into deeds? One way is to think about how the AU-EU agenda exemplifies tensions and some opportunities in the Africa-Europe partnership. But, crucially, to realize these opportunities requires new thinking and political will to raise the agenda given the attention of leadership and resources are diverted to the situation in Ukraine.

The first and most immediate challenge is overcoming vaccine inequalities and travel restrictions. Vaccine solidarity should be high on the Summit’s agenda because fast rollout will speed economic recovery. Vaccination rates in Africa are dismally low at less than 12 per cent presenting a significant barrier to mobility. The World Bank estimates a cost to African economies of USD 14 billion for each month’s delay in vaccine rollout. If things carry on as they are, African countries risk losing half of their GDP to a slow vaccine rollout.

Travel restrictions on people going to and from Africa are not always related to vaccination and infection rates. Whether vaccinated or not, travellers from Africa to Europe face quarantine requirements. Restrictive measures ostensibly introduced to contain the spread of Covid-19 risk becoming a permanent feature to reinforce Europe’s pre-pandemic ‘containment strategy’ for would-be African migrants.

Challenge two is the thorny issue of legal pathways for migrants from Africa to Europe. For African policymakers, European destination countries are paying only lip-service to legalizing migration routes and rarely making it a priority. Visa facilitation, faster family reunification and increased labour migration are yet to materialize. The creation of job information centres along migration routes has not significantly impacted people intending to move to Europe via irregular channels. Only a limited number of people with the skills required in European labour markets are likely to benefit from the current legal migration avenues because skills development and skills matching are low priorities for both implementation and funding. More than a decade after its declaration in the AU-EU partnership of 2007, for many African policymakers and potential African migrants, waiting for meaningful legal pathways is like Samuel Beckett’s Waiting for Godot who never arrives.

In the Kigali Declaration, AU and EU leaders recognized the negative impact of the Covid-19 pandemic on migration and mobility and pledged to collaborate in addressing its adverse effects on migration and mobility in general. The Declaration asserts that migrant workers are negatively impacted by lay-offs or losing their businesses, particularly in the informal economy while also acknowledging the critical role migrants play in response to the Covid-19 pandemic, particularly in essential services such as healthcare and agriculture/food supply. The Kigali meeting also encouraged ‘best use of existing legal pathways for migration with more tangible benefits for countries of origin, transit and destination’. In this regard, they identified common priorities including protection of migrants, exchange programmes (for students, researchers, academics and entrepreneurs), remittances and diaspora investment, and research capacity building on migration governance.

Legal migration avenues to Europe in the form of visa facilitation, faster family reunification and increased labour migration are yet to materialize, despite repeated pledges from the EU. For example, the effort by some EU member states to establish job information centres on migration routes to the EU has not had a significant impact on the potential ‘irregular migrants’ who intend to move to Europe using irregular channels. Building the capacity to train African skilled labour needed by EU countries means building training centres, which, in turn, requires significant resources.

Challenge three is that the EU continues to place all its eggs in one basket: border controls, return and readmission. There’s a stark contrast between the huge and growing EU political and financial commitment to counter irregular migration and return and funding for reintegration and legal pathways. By focusing on return and readmission, the AU-EU partnership has if anything undermined the feasibility of long-term return agreements with African countries. The inadequacy of (mainly financial) reintegration support is a factor in reluctance to return on the part of migrants and the government alike. Given that migrants and their families have invested in the migration and that their families’ livelihoods depend on foreign remittances, African governments face intense opposition to return from the affected families. If there are large numbers of returnees and the resources available to integrate them into domestic society are inadequate, resistance is not limited to the public but also arises from some branches of government, notably those in charge of employment and welfare. Occasionally there have been protests from those demanding more resource allocation or even a need to rescind the relevant agreement.

It can be easy to lapse into pessimism, but there are five ways forward for AU-EU relations on migration and mobility.

First, the AU and EU need to reset their current partnership on migration and mobility to avoid the arguably self-defeating EU-driven urge to put all their migratory eggs in one basket: return, readmission and reintegration. This diplomatic posturing is fast rendering the partnership controversial, counter-productive, ineffectual, and divisive within Africa and even in Europe itself. The AU and EU must have a candid dialogue on whether or not the current incentive infrastructure for return, readmission, and reintegration is adequate for migrants and governments to accept the related political and socio-economic risks.

Second, the AU and EU partnership needs to generate the political will to answer longstanding demands of Africans for more avenues for legal mobility and less cumbersome visa regimes. The effective expanded and accelerated implementation of mobility schemes in the EU’s New Pact on Migration and Asylum as well as its revised ‘Blue Card’ Directive for highly skilled workers require political determination from the European side.

Third, the AU and EU partnership should insist on candid dialogue and mutual understanding, adequate financing, and implementation of overlapping priorities. Dialogue can help countries to articulate their aspirations and concerns, as well as their capacity limitations. In light of the complex challenges Africa is facing, including the pandemic, waves of coup d’états, and civil wars in some countries, realistic expectations about African governments’ capacity to deliver on pledges need to be factored in.

Fourth, the AU and EU partnership should unequivocally reiterate that the principle of non-refoulement and the protection of migrants’ human rights remain the lodestars of the partnership.

And last but certainly not least, the AU and EU partnership should marshal all necessary resources to expedite vaccination rates in Africa to root out the effects of the Covid-19 pandemic and facilitate recovery and roll-back travel restrictions.

Mehari Taddele Maru is currently a part-time Professor at the Migration Policy Centre and Academic Coordinator of the Young African Leaders Programme at the School of Transnational Governance at the European University Institute in Florence, Italy. Prof. Mehari is also a senior expert at Mercator Dialogue on Asylum and Migration and a Fellow at the United Nations University Institute on Comparative Regional Integration Studies (UNU-CRIS), Bruges, Belgium. @DrMehari Prof. Andrew Geddes is a Professor of Migration Studies and the Director of the Migration Policy Centre. @AndrewPGeddes