After Egypt’s 2011 revolution, the military soon acted to retake power. Today, Sudan’s military is behaving and talking in the exact same way. 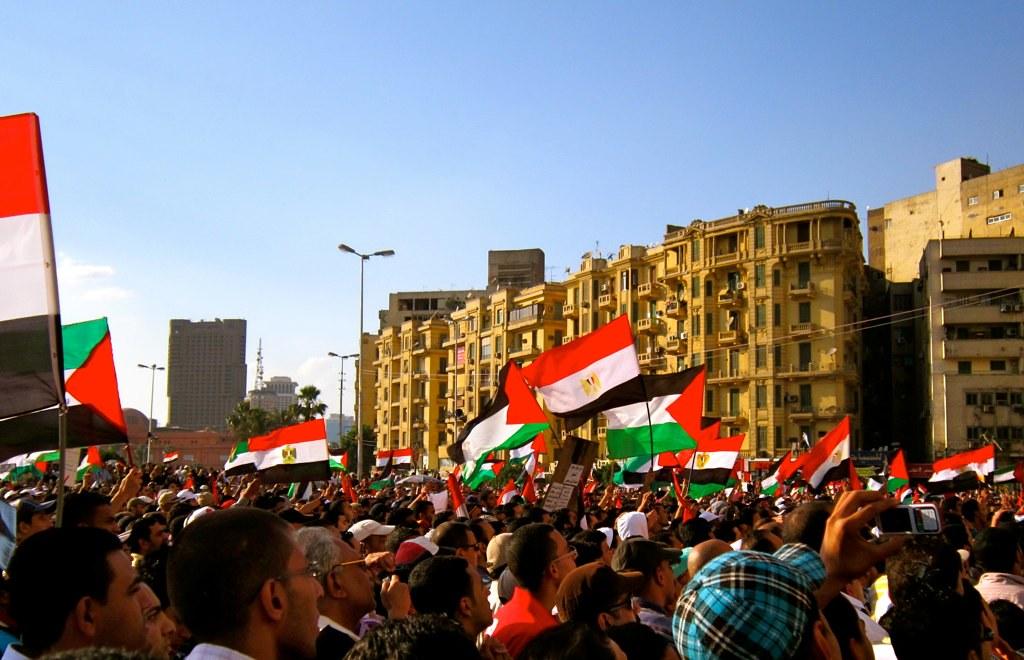 In 2011, mass protests led to the downfall of President Mubarak. In 2013, the military retook power in a coup. Credit: Gigi Ibrahim.

A revolution is like a train journey. As such, you need to make sure not to get off too early or at the wrong stop. And you cannot afford to allow the military, who might crash or throw you off before you reach your destination, to take over.

Sudan’s revolutionary train journey began on 19 December 2018 with enormous demonstrations across towns and cities. The people protested against the economic crisis and called for President Omar al-Bashir to step down after nearly 30 years in power.

The demonstrators arrived at their next significant stop on 11 April with the removal of al-Bashir. That was also, however, when the military council boarded the train and the last two months have seen the civilian movement and Transitional Military Council (TMC), who ousted al-Bashir, wrestle for control of the tottering vehicle.

This week, after months of peaceful demonstrations and negotiations over the form the democratic transition should take, the military turned on the demonstrators. They stormed the main protest camps in Khartoum with soldiers killing at least 60 people, according to the latest estimates. The TMC scrapped all previous agreements made with the opposition Forces of Freedom and Change (FFC) and announced that elections will be held within nine months.

“Guardians of the revolution”?

For those of us who took part in Egypt’s revolution in 2011, events in Sudan look all too familiar. For me, this week’s violence is particularly reminiscent of the Rabaa massacre of August 2013. In that event, Egypt’s military and security forces raided two protest camps and attacked opposition demonstrations, killing more than 800 people in one day.

That massacre occurred two months after the military overthrew Egypt’s first elected president. Now, two months after al-Bashir’s departure, Sudan’s own military council appears to be reading from the same manifesto as their Egyptian counterparts.

In Egypt, our military leaders repeatedly told us they were the guardians of the revolution and their only aim was to protect the state against instability. They insisted that they had no appetite for power. General Abdel Fattah el-Sisi, who led the coup, has reasserted this claim many times ever since, despite recently changing the constitution in ways that consolidate the military’s power and allow him to rule until 2030.

These exact same arguments are being made by Sudan’s military leaders now. Abdel Fattah al-Burhan, the head of the TMC, and his deputy Mohamed Hamdan Dagalo (aka “Hemedti”), have similarly talked of themselves as protectors of the revolution and insisted that they want to eventually see a civilian state.

When you hear this, our advice from Egypt is to be warned. Whatever they might say, these military leaders have no intention of allowing civilians to govern Sudan. They are planning to take full power soon and, just like in Egypt, proceed to repress every single type of opposition.

In Egypt, the military bided their time from the 2011 revolution to their coup in 2013. In that period, they tried to maximise the role of the army in the new government while spreading rumours about their political opponents. They issued propaganda painting the military as Egypt’s last hope, a belief that eventually made it easier for them to overthrow the government and take power.

Sudan’s military council today are giving the same ridiculous speeches almost verbatim in an attempt to discredit their opponents. “The demonstrations threaten our state”; “the leaders of the demonstration are agents of foreign intelligence”; “enough is enough, we have to remove this demonstration camp from the streets for the sake of other people”. These quotes could as easily be from Egyptian as Sudanese military leaders.

More worryingly, it was not just through words that Egypt’s army prepared to tighten their grip on power. Before the Rabaa massacre,  security forces used violence on smaller scales, almost as a way to test the reactions of the people and the international community. They killed more than 50 people protesting the coup on 8 July 2013, then killed more than 150 people a few weeks later. The reaction domestically and internationally was muted. The Rabaa massacre happened the next month.

As soldiers believed to be from the influential paramilitary known as the Rapid Support Forces (RSF) storm demonstration camps in Sudan, it seems like this may also be a test. The TMC will be waiting to see the reactions from the likes of the UN, the African Union and Western partners and if any meaningful action will follow.

But it is not just these foreign bodies that the TMC will be keeping an eye on. In Egypt, President Sisi repeatedly thanked Saudi Arabia and the UAE for supporting him from day one. Going from audio which I myself leaked before having to flee Egypt, it came to light that these Gulf countries gave the Egyptian military over $40 billion to face down the opposition and Muslim Brotherhood.

It is therefore very unsettling to find out that in the last three weeks, members of Sudan’s military council have been visiting Egypt, Saudi Arabia and the UAE too. Some of these trips took place just days before they attacked demonstrators and their camps.

Dealing with the military

Arguably, the most critical aspect of any revolution is the unity of the movement. This is essential in upholding the people’s demands and counteracting the power of a self-interested military. In Egypt sadly, different factions fell out and the relationship with the military council changed several times. This allowed the army to take advantage and, later, kill or arrest anyone who opposed them.

In Sudan, the Forces of Freedom and Change have faced a similar dilemma. They first tried to negotiate with the military, but the TMC has rewarded them by cancelling all agreements, attacking protesters, and throwing around false accusations. The protest organisers, the Sudanese Professionals Association (SPA), have now called for a campaign of mass civil disobedience.

In the coming days, the movement will face several difficult decisions. The revolutionary train is in danger of being completely hijacked and going somewhere none of the protesters want to go. If there is one lesson Egypt’s failed revolution can offer at this critical junction, it is this: Whatever they may say, do not trust the military or their self-serving foreign allies.

Osama Gaweesh is an Egyptian journalist and TV presenter living in exile in the UK. He exposed famous audio leaks about General Sisi.