Despite facing harassment, more and more women and girls are defying sexist attitudes and riding bikes and motorbikes around Cairo. 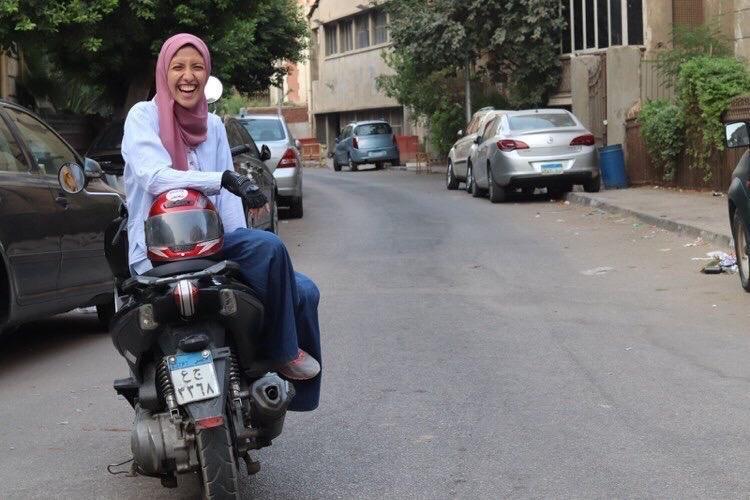 Esraa, a customer of the bike lessons service Dosy, on the bike of a motorbike in Cairo, Egypt. Credit: Dosy.

Heba Attia first started riding a bike when she was six years old. She fell in love with it and the sense of freedom it gave her.

“I used to ride around my house and feel some sort of independence as a child in playing, learning, and moving around with my friends in a safe environment,” she says.

But this joy didn’t last long.

“When I was a teenager, I was told that grown-up girls are not supposed to cycle,” she recalls. And so, Attia traded in her bicycle for other activities and left the fond memories of cycling at the back of her mind.

It was only twenty years later, as a woman in her 30s, that she considered getting back on two wheels and re-questioned what her family had told her.

“I rediscovered my love for cycling while studying urbanism, knowing how cycling instead of driving can provide a better living environment in our cities and a positive experience in our daily commutes physically, mentally, and financially,” she says.

However, as Attia started cycling in Cairo, she came to realise first-hand why she had been warned not to cycle and why she had only very occasionally seen women on bikes or scooters in the capital. She found out that female cyclists have to dodge harassers as much as they have to weave between potholes and crowds.

“I once passed by an old guy who told his friend out loud that ‘the world is coming to an end now that women are cycling’,” says Attia. “One other form of harassment…is car drivers honking to ‘encourage’ us or motorcycle riders and pedestrians pushing themselves towards us laughing, entertained, while we have to manoeuvre quickly so we don’t fall off.”

When a woman cycles, the potential for harassment perpetually hangs in the air around them. However, according to Attia, something may be changing in Egypt’s streets. As more conversations happen about female cyclists, a growing number of encouraging voices are rising against the whispers and shouts of disapproval.

The stigma surrounding women cycling is driven by Egypt’s largely conservative views. The way a female cyclist looks on a bike can be deemed to be sexually suggestive according to these patriarchal beliefs, while the notion of woman zipping through the streets with a carefree attitude clashes with the traditional ideal of a quiet and modest wife or daughter.

Inappropriate behaviour towards women is also rife. In a 2013 survey by UN Women, 99.3% of women and girls in Egypt reported facing some form of sexual harassment. 82.6% said they felt unsafe on the streets.

It is perhaps unsurprising therefore that there is taboo and fear around women cycling in cities like Cairo, though women have increasingly been pushing back. In 2018, for instance, Attia founded Tabdeel, a play on words that means both “to pedal” and “to change”. With the mission of creating safer streets and more “human centred” cities, the idea started off as a workshop, then became a blog, and eventually developed into a multi-faceted initiative.

“Design, research, advocacy and culture,” summarises Attia. “We have made many projects in one or more of these work fields that address cycling urbanism and culture in Egypt. Our work towards safe cycling cities is a continuous effort and communication with the government and different entities who work towards the same goal.”

The initiative’s work is paying off. It has worked with communities to ask them what sort of road design and infrastructure changes they want to see. It has partnered on projects with like-minded NGOs. And it is currently part of the team collaborating with the government to write Egypt’s code for cycling infrastructure.

Menna Ali Farouk and her sister Nouran took a different approach to encouraging more women cyclists. In 2019, they co-founded Dosy, an online platform through which women and girls can get lessons on how to ride scooters and bikes from nearby female instructors.

“When we decided to learn how to ride scooters, we could not find nearby instructors,” recalls Menna. “There is demand but there are not enough academies or independent trainers…We discovered that there is a gap in the market.”

With that gap finally being filled, the interest from women and girls was overwhelming. In a short time, the service amassed 40,000 followers and received glowing endorsements from local celebrities and happy customers.

Thanks to these kinds of initiatives, more women are cycling. However, many still do not feel safe.

Part of this is due to notoriously dangerous roads in cities like Cairo and Alexandria and the lack of cycle-friendly infrastructure. It is not just women that find it difficult to cycle safely. This is an that issue that NGOs like the NADA Foundation for Safer Egyptian Roads is attempting to address. “We support any regulation, policies, or law that focuses on eliminating risks to pedestrians and cyclists from motor vehicle traffic,” says Shehab Abo Zeid, a programme manager at the organisation. “People need to feel safe.”

But a big part of women and girls’ reluctance remains the taboo and harassment that, while declining, are still prevalent. One of the key aspects of cycling that appeals to women – a sense of freedom and independence – is the same one that draws the ire of many men.

“The biggest challenge was criticism on social media,” says Menna. “People in Egypt and the Arab World think that women cannot do certain things including riding scooters and bicycles.”

Challenging these deeply held attitudes will take time, but some Egyptian feminists are optimistic. The success of activists like Nadeen Ashraf, who is credited with instigating an Egyptian #MeToo movement, suggest a rise in more liberal attitudes among younger generations. And there have been a number of innovative and bold feminist initiatives challenging attitudes and behaviours around typically taboo subjects like reproductive health and sexual pleasure.

“People are no longer burying their heads in the sand and pretending these taboos don’t exist,” says Alexandra Kinias a feminist activist and the founder of Women of Egypt magazine. “These discussions turn ugly sometimes, [but] it is an indication that the society is slowly maturing”.

Kinias credits some of this change to digital activism, which allows women more opportunities to both learn about and advocate for their rights. She sees the rise of women cycling as part of this wider trend is hopeful it will continue.

“It has been instilled in the minds of women and girls that they were to blame for their harassment, especially because of the way they dress and interact in public. That included riding bikes in the streets…[but] women and girls are becoming more courageous to ride their bikes, claiming back a right they have been deprived of for many years,” she adds.

Though the sight of female cyclists might still prompt a double take for many in Cairo, Egypt seems to be on the road to slow acceptance. There is still a long journey ahead, but for those like Attia, the benefits of cycling already outweigh the downsides.

“Cycling is my favourite mode of mobility out of all those available for my daily commutes,” she says. “I have a very positive experience cycling in Cairo despite all the challenges we have on our streets.”

The pawn who became king: How has ...