How a communion wine shortage gave birth to an international brand

Linga wine is a small family business in Malawi that punches well above its weight. 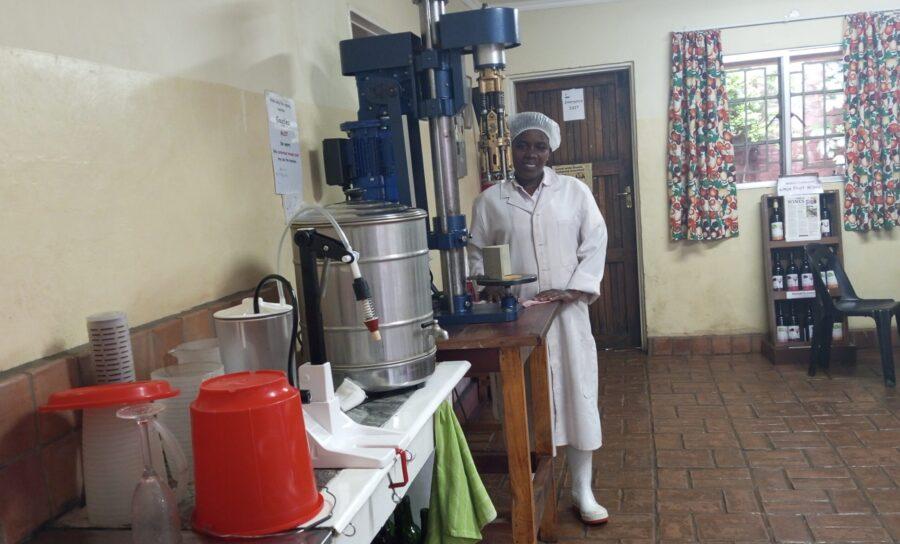 On a Friday afternoon, an elderly Margaret Ngwira emerges from her house in a low-density neighbourhood of Lilongwe, the capital of Malawi, and makes her way to a room stacked full of barrels. Only the sounds of chirping birds disrupt the tranquil scene.

“This is where most of the work is done,” she says. “This wine has been maturing for eight months. It’s still very sweet but in a few more months, it will be perfect.”

The setup may look modest, but this is the headquarters of Linga Fine Foods & Winery, the makers of Malawi’s only locally produced and globally exported wine. Staffed by five people, including two of Margaret’s children, the family’s business has happy customers from Zambia to Germany, as well as many in Malawi itself. Margaret has had a busy week, delivering wine to Likoma Island and Monkey Bay on the coast of Lake Malawi.

Unlike typical wine, Linga’s products aren’t made from grapes. Instead, they use local fruits that are available all year round such as white guava, rosella hibiscus, strawberries and mulberries. Customers say they enjoy Linga wine for its smooth and unique taste, free from additives and naturally fermented.

“People will prefer international brands, but as soon as people taste ours they forget about other brands,” says Margaret. “It’s so pure. People don’t have hangovers and they don’t get negative effects, and they can tell that this is different.”

Margaret has overseen the operation for the last four years, but she credits its success to her late husband, Timothy, with whom she co-founded the company. He meticulously documented the winemaking process and worked full time until he passed away in 2018.

“Towards the end of his life, he became quite sick and I said ‘I don’t think you can manage, we should give up’ and he said ‘I don’t want to give up’ because it was his and it gave him a new lease of life.” Timothy (left) and Margaret Ngwira while he was alive. Source: Linga Wine Twitter.

Though Linga was founded in 2006, its origin story begins four decades earlier. The year was 1965 and the Presbyterian Church in Blantyre was running low on wine. Tom Colvin, the chaplain at the University of Malawi, came to the rescue. The engineer and missionary from Glasgow, Scotland, was an enthusiastic fruit wine maker and decided to put his skills to good use.

He kept making wine for the church and was later joined in this endeavour by a bright young man called Timothy Ngwira, one of the first ever students at the university. The biology and chemistry major caught the chaplain’s eye after he noticed the undergraduate’s aptitude for his studies and keen interest in Christianity. Colvin taught Timothy what he knew of wine making and they became partners in making altar wine for church and Rosella wine for social events.

Around this time, Timothy also met another Glaswegian who would change the trajectory of his life: a young volunteer called Margaret Gunn. The two fell in love and, in 1970, Colvin officiated their marriage. Margaret also learnt the art of wine making and the newly weds began making fruit wine, using five litre demijohns and equipment given to them by the chaplain. It started as a hobby but soon grew.

“People were always asking for it for free,” says Margaret. “We were giving it even to people we hardly knew and then we said ‘no, this doesn’t make sense’.”.

The couple decided to produce wine on a larger scale but, for decades, life got in the way. Timothy got a job at the University of Namibia as the first head of the Food Sciences and Technology Department, while Margaret worked as a librarian. They lived in Scotland for 12 years for further work and education.

However, they never gave up on their dream. They put money aside while they were abroad and, in 2006, when they were back in Malawi, finally established their wine-making operation. They called the business Linga Fine Foods & Winery in reference to Timothy’s mother who was part of Mwase chieftainship and came from a village called Linga in Kasungu, a place known for rich historical exploits. Linga means fortress.

Today, Linga sells about 500 bottles of wine a month at around 5,000 Kwacha ($4.90) each. For Margaret, however, profit is not the driving force behind the project.

“Wine is not something that can make money quickly. It’s very slow maturing and it’s not a very profitable product but it’s a very interesting product,” she says. “We have always tried to price it as low as we can because our target audience is the middle income Malawians…Some years we declare a small profit and some years we don’t.”

These days, Linga has also become a cornerstone of the local economy by buying fruit that farmers had previously thrown away due to a lack of buyers.

“These fruits may look ordinary but now I know that they are profitable,” says farmer Theresa Kamphulusa. “With the proceeds made from selling to the Ngwiras, I am able to grow my herds of goats and I’ve also bought some pigs.”

But not everything is smooth going. Linga faces several challenges, such as the high costs of importing chemicals and exporting the finished product. The company had to turn down an order from Rwanda recently due to air freight fees.

“Some people think exporting can make you a lot of money, but you need to have a lot of volume and low prices,” says Margaret. “With the taxes and cross border tariffs, it makes it more difficult.”

Another difficulty has been to convince sceptical consumers at home. .

“In Malawi, we have an attitude that local is not good,” says Margaret. “The word local is almost negative and that’s a tragedy for Malawi because how can we create jobs?”

Despite these challenges, Linga not only persists but is planning to expand. It recently acquired four hectares of land near Lilongwe airport on which it hopes to build a conventional winery with mental tanks, flashing system and temperature control.

Not everyone in the community is charmed by Linga’s success. Ironically, some parishioners from church, where the wine’s story began, think the alcoholic product is unbefitting of good Christians. Margaret responds to these claims by referring back to a Bible verse. “God gave us wine to be happy, oil to soothe the skin, and bread to give strength,” she says.