Why the Latest Attempt at Peacemaking in Sudan Won’t Work 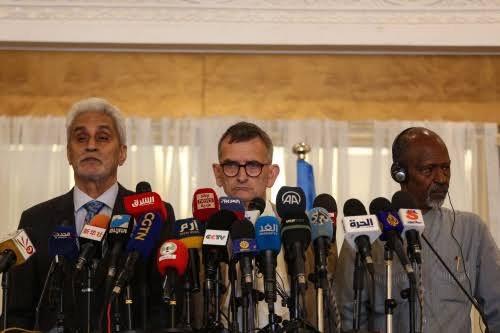 Since Sudan’s military coup on 25 October 2021, the United Nations mission in Sudan (UNITAMS) has tried to find a compromise to the country’s political crisis. In January 2022, it launched a dialogue with the military and political parties, and it recently combined these negotiation efforts through the African Union and the regional body, IGAD’s mechanism. While most Western nations have publicly supported the tripartite process, it has been rightly criticized by Sudanese activists and some political parties who see the mediation effort as legitimizing the military coup. Critics of the process are right.

The international mediation effort would entrench military rule with Potemkin civilian representation that would have even less power than previous civilian governments. On fundamental issues like democracy, there is no room for compromise or mediation. The idea that the junta will reverse the coup through mediation is implausible. It is hard to see how the UN and foreign nations can claim to support a transition to democracy while supporting a process that would rubber stamp the military takeover.

It’s easy to see why pro-democracy activists have protested against UNITAMS : “A transition would do perfectly fine without UNITAMS, in-fact better,” Samahir al-Mubarak, an activist told me.

The international community is trying to use a 30 June deadline for IMF and World Bank financing to entice the military into an agreement. The international community risks moving the goalposts so far that the cosmetic announcements Sudan’s junta makes would be hailed as a breakthrough in the peace-process. For example, the recent announcement that the military lifted the state of emergency was met with applause from the UN and diplomats. In reality, the junta has made up the rules since the 25 October coup and lifting the state of emergency will have little effect on the continued takeover. Violence against protestors has continued. Desperate to make a deal, diplomats risk repeating their past mistakes.

In his brilliant book When Peace Kills Politics, Sharath Srinivasan details how international peacemaking in Sudan’s recent political history entrenches conflict and displaces domestic civil politics that can actually make lasting change. The mediation process displaces the grassroots political movement that actually creates change in Sudan. It was not foreign intervention or even the country’s opposition political parties that ended the 30-year rule of Omar al-Bashir in 2019, but grassroots labour activists.

Power-sharing agreements in Sudan have often led to violence because they do not address the root causes of conflict and often make the problem worse by enabling corrupt elites. A continuation of Sudan’s wealth and power sharing formula dominated by the military extends to the current mediation initiative. The recent Juba Peace Agreement, also supported by the international community, has contributed to a new chapter of violence in Darfur. When the long history of peace processes and compromises that have spurred violence in the Sudans is pointed out to diplomats, they rightly ask what an alternative approach would be.

Western nations are now considering financial sanctions on Hemeti and Sudan’s military leaders, specifically the Rapid Support Forces (RSF) (spurred by the Russian invasion of Ukraine). However, if applied, financial sanctions alone are not a sufficient response.

An alternative approach begins when Western diplomats understand how their current policies are entrenching autocracy. Sudan’s junta are masters at siphoning aid to entrench their own political interests while applying superficial changes to alleviate pressure. They are proficient at cowing diplomats with threats of expulsion so human rights investigations and attempts to protect civilians do not happen. They offer dubious intelligence to Western officials focused on terrorism and migration. They pressure diplomats into whitewashing massacres. They allude to instability or Islamists that loom with too much pressure on the military’s regional allies. Understanding and mitigating how the international community falls into these and other traps from Sudan’s junta is a necessary first step in an alternative approach to support real change.

Diplomats are also wondering how to approach the leader of Sudan’s RSF, Mohammed Hamdan Dalgo “Hemeti”. They see his economic and political power in Sudan, influence across the Sahel, and the rise of violence in Darfur, and are wary of alienating such an important figure with a history of violence. There is not a good short-term solution to Hemeti’s rise, but in the long run there are options if nations are willing to accept trade-offs.

Hemeti is essentially the head of a multinational company. His most important resources are minerals and mercenaries. His private empire can be undermined by increasing the costs for his clients or undermining his assets. Increasing the costs for Hemeti’s clients would include threatening and actual oversight of Gulf institutions that facilitate Hemeti’s finances and pressure on foreign states or groups who use Hemeti’s forces. Undermining Hemeti’s assets would include reforming the export process of Sudan’s gold, and economic empowerment across Darfur. That development could mean the sustainable development of agriculture from businesses. In my interviews with Hemeti’s tribesmen in Darfur the number who are dissatisfied with a life of fighting is noticeable as well as how many believe Hemeti has put Khartoum politics over their clan’s interest.

It’s true that some of these solutions, like programmes monitoring gold exports, take time to be established in a bureaucratic system. Some are difficult to carry out, like undermining Hemeti’s grip over his fighters. But other solutions, like oversight and pressure on Gulf institutions have not occurred yet because Western nations value their relationship with Gulf countries over their interests in Sudan. If Western nations want to undermine Hemeti, their challenge may not be in changing the behaviour of the RSF commander, but in changing the behaviour of their diplomatic colleagues from their own nations working in the Gulf.

Justin Lynch is a writer and researcher living in Sudan. He is a co-author of Sudan's Unfinished Democracy: The Promise and Betrayal of a People's Revolution (African Arguments/Hurst, 2022).