Restoring a symbolic monarch may sound anachronistic, but after a decade of division and chaos, it makes perfect sense to many Libyans. 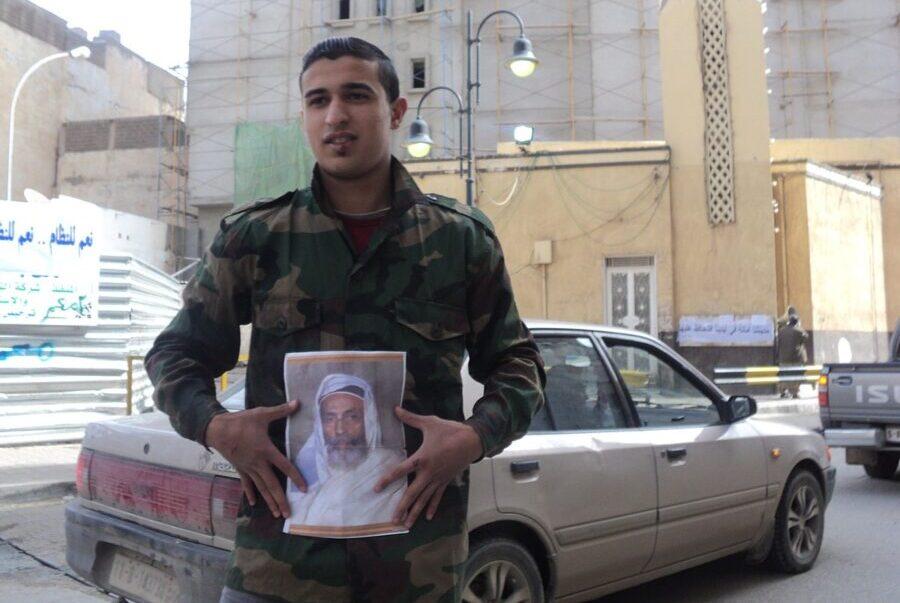 A man in Benghazi holds a picture of King Idris in the midst of the Libyan Uprising in 2011. Credit: Maher27777

More than a decade has passed since the fall of Muammar Gadhafi in 2011, but the Libyan Uprising is no closer to a happy ending. After three attempts at holding elections without a constitution – or, for that matter, any legal framework – the UN tried, in a last-ditch effort, to hold an “urgent constitutional dialogue” in Egypt last month. Unsurprisingly, the talks failed.

Libya is back to square one. It has “two Prime Ministers”, one who refuses to give up power while the other struggles to acquire legitimacy. Violent clashes have started in Tripoli, and oil and gas exports are once again being interrupted by militias. This has followed years of political stalemate and instability, stemming from an inability to elect a government recognised by the East, West and South of the country – the three distinct regions that came together to form Libya in 1951. These geographic divides continue to play a major role in political life and animate debates regarding the allocation of resources and political equality. Many Libyans feel another civil war is just around the corner.

Libya today is a country without a social contract. As in the Gadhafi years, authority derives from force rather than trust; it is about the monopoly of violence rather than the national interest. Those who have been successful in garnering power are those who have resorted to force over consensus, and who have turned to violence rather than risk losing power in an election. It is no way to run a country, and certainly no way to build one. Libyans have no trust in any individual or institution in Libya, and rightly so; they have not earned it. The burning down of Tobruk Parliament and the houses of numerous politicians by protesters in early-July attest to that sentiment.

Peacebuilding efforts to date have focused on creating something new, such as writing a constitution not grounded in Libyan’s historical experiences or relying on leaders who do not have the consensus of the people. UN-led efforts have emphasised elections over all else. Yet over and over, these processes have ended in war. Over and over, they have led to an impasse, as local actors string the international community along until opportunities arise to seize power through force.

With the mandate of UN Secretary-General’s Special Adviser for Libya, Stephanie Williams, set to expire, there is no better occasion to change course. It is time for more local and authentically Libyan approaches to take centre stage, and the good news is that there is already an alternative available: Libya’s Independence Constitution.

Libya’s “birth certificate”, as it is known in the country, was the drafted by the UN in 1951. It included freedom of the press, freedom of expression, equality before the law, an elected parliament, and regular elections. At its heart was a largely symbolic monarchy, led by the Libyan hero Idris al-Senussi, who served as father of the nation and King of Libya until his overthrow in a coup led by Gadhafi in 1969.

Over half a century later, there is growing talk in Libya of restoring the independence constitution. And with good reason. It would solve many problems in one fell swoop. It would create a framework for holding elections. It would give us a constitution that we could use as starting point from which to modify and develop. It would give us a sense of national identity beyond the shadow of Gadhafi. While many may see a return to monarchy as anachronistic, a suitable symbolic leader could unite the country and bring competing factions together with assurances that their concerns will be heard.

Restoring a symbolic monarchy would have other benefits too.

First, it would prevent the need for the creation of a ruling Presidential Council that would enthrone Libya’s current crooked political class. Those pushing for this as a solution are simply looking for a way to guarantee their individual interests.

Second, it would give us the historical continuity we need to build a nation, a continuity that has been obfuscated by 42 years of dictatorship and 11 years of chaos. This instability has, most concerningly, led to a lack of national identity and unity, and a situation in which powerful parties only seek to promote their own interests at the expense of the Libyan state.

And third, it would put the future of Libya in a clean pair of hands. Though King Idris’ reign was far from perfect, a new monarchy would not be implicated in a civil war in which it did not participate. It has not killed, abducted, and tortured. It has no opponents on the battlefield.

Instead, it has the unique potential to reconcile the nation’s past with its future, and the ability to reconcile Libya’s minorities. Despite decades of anti-monarchy propaganda under Gadhafi, the late King Idris and his son Prince Hassan are still seen positively. Their pictures can be found at every protest across the country. Many Libyans who came of age in 1969 lament the coup to their grandchildren as a terrible mistake and urge them to repair it. The Senussi family – now led by King Idris’ 59-year-old grandson Mohammed – also has impeccable Islamic credentials and offers a genuine chance of reconciling secular and Islamist actors.

Restoring Libya’s independence constitution would not be straightforward. It would have to happen by consensus, and the exact mechanisms would need to be agreed by various parties. An Afghan loya jirga model in which tribal leaders make decisions by consensus would be one model to consider.

Such a plan would also likely face resistance from those who currently enjoy a degree of power in Libya. However, support for this solution has grown to the point it cannot be ignored much longer. The independence constitution is finally a serious topic of conversation, validating what Libyans like me have been saying for years. It is now critical that Libya’s birth certificate not get hijacked by actors working for their own interests and who seek to spoil Libyans’ last chance for peace and reconciliation.

Restoring a monarchy will sound strange to many ears. But in a divided and chaotic Libya, it makes perfect sense.

Simplifying peacemaking in a complex world

Why are there no Black riders in ...

Ashraf Boudouara is a political analyst based in Libya. Having been involved in advocating for a constitutional democratic solution for Libya for many years, he currently serves as the Chairman of the National Conference for the Return of the Constitutional Monarchy.