Lagos is unique but not in the way people think

The aspects of Lagos that are often vilified are exceptional only in their scale. 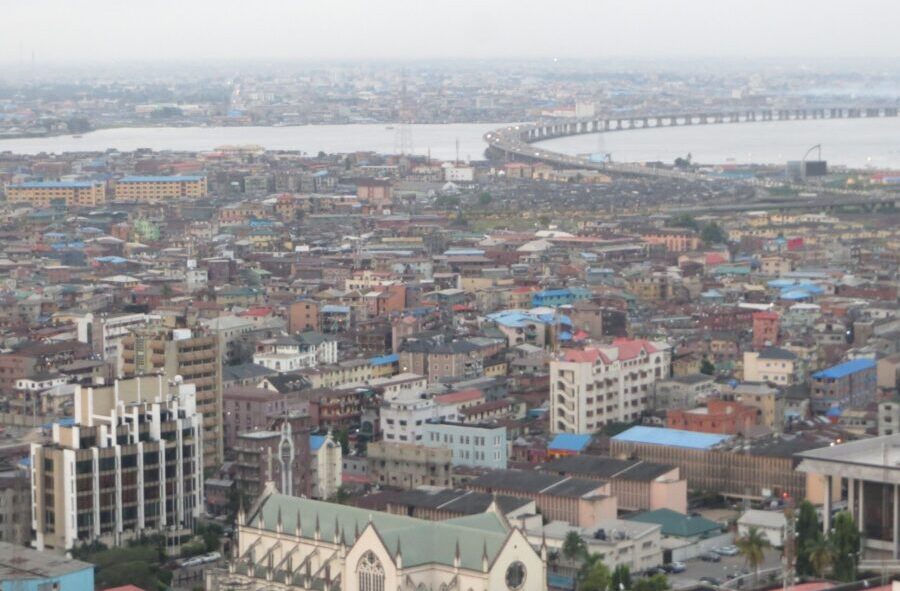 The same version of unequal oligarchic capitalism that has taken over Nigeria’s commercial of Lagos has taken over much of the world in the last 40 years. Credit: Tim Cocks.

When I say I’m travelling to Lagos, people only familiar with the city’s public image usually make a face. “Why would you want to go there?” “I heard the corruption is terrible.” “Isn’t it dangerous?” ask even those from my current hometown of Johannesburg, a city with vastly worse violent crime.

Nigerians are all too familiar with such perceptions and don’t tend to contest them. They are well aware of all that’s wrong with their commercial capital, which grew from a small port town to Africa’s undisputed king of megacities in lightning speed. They recognise that corruption and extortion are ubiquitous here. That few places house such inventive scam artists. And that you can’t even think about making an appointment on the other side of town unless you’re prepared to sit for five hours in traffic.

Lagosians understand why the city frequently comes near the bottom of quality of living indices. And yet they also bristle at the sense of exceptionalism attached to Lagos and the implication that the city of 20 million people can somehow be written off as a basket case with nothing to teach the world’s other metropolises.

They are right to bristle. The pressures that created and continue to sculpt the unwieldy megacity also shaped the modern world: a brutal history of being used as a slave-trading port by European powers; colonisation entirely for extractive purposes by Britain; the disastrous discovery of oil just before independence; a globalised economy that gives more or less complete power to finance capital and from which most Lagosians have been left out.

Even today, the dynamics that make Lagos a difficult place to live are hardly unique to Nigeria. For instance, the city’s economic system favours a handful of wealthy oligarchs at everyone else’s expense. This elite get to carouse, avoid tax, leave and return at will on private jets, and drink imported champagne all funded by monopoly business interests with cosy relationships to the state. They use the property market to hide the proceeds of corruption, meaning that rents never come down despite decades of furious construction in the city’s more desirable locations. They send their kids to posh schools abroad while the education system at home suffers chronic underfunding. Does any of that sound unique? Couldn’t it just as easily describe so many cities, especially (let’s be honest) London?

The fact is that the corrupt, unaccountable oligarchic capitalism that rules Lagos has also taken over the world in the past 40 years as billionaires have moulded the international system to remove constraints on how they operate and exempt them from giving back to the society from which they profit. The offshore system of tax havens through which Nigerian elites stash their loot is centred on London and its crown dependencies as well as Switzerland and dozens of other international secrecy jurisdictions.

True, Lagos traffic is dreadful. The city came top of the Numbeo traffic index in mid-2022 but, interestingly, the wealthy Los Angeles came second. What do they have in common? A woeful lack of investment in public transport. Lagos authorities have battled admirably to fix its traffic in the past two decades by widening freeways and building extra roads and bridges. The trouble is that, within months, they’re full of traffic again – much like in LA. Perhaps Lagos’ best chance to date could be a mass transit system centred on light rail that it hopes to finally open next year.

Even with the best will in the world, keeping up with Lagos’s frenetic pace of growth would be almost impossible. London took the whole of the 19th century for its population to increase sevenfold. Lagos is already 65 times bigger than it was in 1950. And this expansion will only continue as climate change and insecurity push more farmers to abandon their crops and head for the city. But again, this is a global trend, albeit with its foot on the Lagos accelerator. This decade, cities became home to more than half the world’s population, a figure expected to grow to two thirds by 2050.

So what does make Lagos unique? You might do better to consider its astonishing artistic and musical creativity, literary life, film industry, and snappy dressers. The purpose of my most recent trip to Lagos was to attend the Aké Arts and Book festival. It was a feast of enlightened discussions on Black Consciousness, feminism, storytelling, and literature, with live music and poetry recitals thrown in. There were at least two other cultural festivals going on at the same time, and I remembered that this indefatigable vibrancy was what had made Lagos so hard to leave after I lived here between 2011 and 2015. The city’s pop music industry has also conquered the world – something even 1970s musical wizard Fela Kuti never quite managed to do. And we all know how prolific its film industry is, exporting its product across the continent and its diaspora. In 2020 alone, Nollywood produced some 2,500 films that accounted for $7 billion in revenue for Nigeria. The dynamism of Lagos’ entrepreneurs is legendary, or at least it should be.

Another unique aspect of Lagos rarely spoken about is its remarkable religious tolerance, a word that seems far too weak for the way in which the city holds together many faiths so harmoniously. Of about 20 million Lagosians, roughly half identify as Christian and half as Muslim. Traditional, mostly Yoruba, polytheistic beliefs are also widespread, often adopted in complement with the monotheisms which are themselves divided into several varieties. Nigeria is infamous for religious conflict – a reputation that’s actually somewhat unfair – but Lagos isn’t. The city sometimes erupts into violence over land, criminality, or ethnicity. But never religion. This is a city in which people of Islamic and Christian faiths mingle and marry each other every day. I wonder if there’s is there anywhere in the world with such a large number of Christians, Muslims and polytheists all living side-by-side in peace.

Lagos is unique but not in the way people think.

Why Africa’s patronage system is under threat ...

The insecurity ahead of Nigeria’s 2023 elections ...

Tim Cocks is the author of Lagos: Supernatural City (Hurst, 2022), an intimate portrait of Africa's biggest metropolis. He lives in Johannesburg where he is a journalist covering southern Africa.