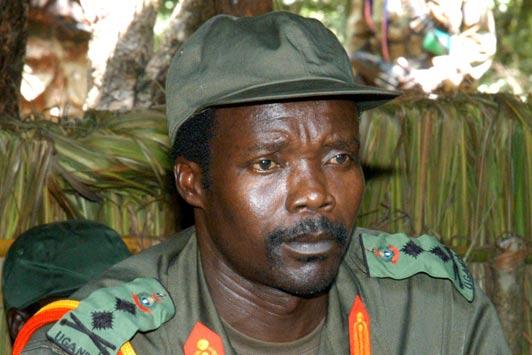 Put yourself in Joseph Kony’s shoes: imagine you are a fugitive leader of a rebel band in the forests of central Africa, travelling on foot and avoiding encounter with any organized military force. You have spurned peace talks and bribes because the only existence you know is surviving off the land and its fearful people. Every high profile offensive by the armies of three neighbouring countries, or international Special Forces, that fails to capture or kill you, adds to your mystique. Your army is run as a cult, using charisma and fear. For a quarter century your reputation has grown, even while your political agenda has dwindled. In fact, since the killing of Osama bin Laden, you are arguably the most wanted man on the planet.

Today, eight years after abandoning northern Uganda, the LRA’s depleted band of a couple of hundred barefoot fighters is somewhere in the borderlands between the Democratic Republic of Congo, South Sudan and Central African Republic. According to the “˜LRA Crisis Tracker’ they have killed 98 civilians in the last 12 months and abducted 477. That’s an impressively high infamy-to-atrocity ratio, testament to the effectiveness of terrorist advertising. In earlier days, the LRA achieved spread terror throughout northern Uganda by its gruesome mutilations. Severed lips and noses spread the message better than a radio station.

Today, Kony’s supernatural powers are newly validated by his newest enemy, the earthly superpower, which is staking its power and prestige on catching or killing him. The LRA’s new echo chamber is an advocacy group, Invisible Children.

The armies of Uganda, South Sudan and Congo, backed by American advisers, may yet succeed in putting handcuffs on Kony and delivering him to The Hague. But there are plenty of dismal precedents for failure. In 2002, following the U.S. declaration that the LRA was a terrorist organization, the Ugandan People’s Defence Force (UPDF) won the reluctant cooperation of Sudan and launched Operation Iron Fist on both sides of the Uganda-Sudan border. It didn’t succeed. In 2008, after the LRA had relocated to north-eastern Congo and the adjoining areas of southern Sudan, a joint offensive by the armies of Uganda, Congo and South Sudan also failed. Another episode was a 2006 operation by Special Forces attached to the UN mission in Congo. Experts in jungle warfare, Guatemalan commandos, were dispatched to the Garamba national park with the objective of executing the recently-unveiled ICC arrest warrant against Joseph Kony and senior commanders. The operation ended in disaster with the UN soldiers fatally shooting each other.

The problem hasn’t been that Kony isn’t well-known. Compared to the host of other rebel groups and militia that have inflicted comparable or greater destruction on the region over the last quarter century, he enjoys by far the highest profile. The problem is that he is hard to catch, and that his adversaries have too often colluded in keeping the war going.

The Ugandan army had an incentive for keeping the LRA alive and kicking – it justified a high defence budget and gave the generals plenty of opportunities for getting rich. Principle and profit have also driven Ugandan military adventurism across its borders. Invisible Children’s solution to the LRA is for the Ugandan army to pursue them through the jungles of Congo. It doesn’t mention that fifteen years ago, Uganda and Rwanda invaded Congo (then called Zaire) to pursue Rwandese genocidaires and Ugandan rebels through those same forests. The world hadn’t cared enough to stop the Rwandese killers regrouping and rearming in Zairean refugee camps, so the leaders of the Uganda and Rwanda, with a nod from Washington DC, took unilateral action themselves. It didn’t work out so well for the Congolese people.  Let’s hope that this time Ugandan soldiers and their proxies kill fewer than 98 Congolese civilians.

Since peace and stability began returning to northern Uganda six years ago, the agenda has been reconstruction and reconciliation. There are programs of social healing to address the roots of the LRA rebellion, which lie in a complicated history of marginalization and the traumas of the war and massacres of the 1980s. Demystifying Kony – reducing him to a common criminal and a failed provincial politician – should be part of this effort to normalize life.

During these years, the LRA has survived in the frontierlands of central Africa because the reach of government doesn’t extend there, and because the inhabitants of these places have as much reason to distrust the depredations of officialdom as they have to fear the cruelties of the LRA. If Kony dies or is captured, the few hundred LRA fighters may disband, but the lawlessness that made possible his reign of fear, will not be so easily resolved.

In elevating Kony to a global celebrity, the embodiment of evil, and advocating a military solution, the campaign isn’t just simplifying, it is irresponsibly naive. “˜Big man’ style rulers – of which President Yoweri Museveni is one – prefer to dismiss their opponents as disturbed individuals, and like to short-cut civil politics by military action. The “let’s get the bad guy” script is a problem, not a solution.

Millions of young Americans are being told about a bizarre and murderous African cult. They are also being told that for 25 years Africa has been waiting for America to solve this problem, which can be done by capturing Africa’s crazed evildoer and handing him over to international justice. And they are led to believe that what has stopped this from happening is that American leaders don’t care enough. The apologists for Invisible Children call this “raising awareness.” I call it peddling dangerous and patronizing falsehoods.