Politics
Home›African Arguments›Politics›What’s next for the DRC? Looking Ahead – By Laura E. Seay

What’s next for the DRC? Looking Ahead – By Laura E. Seay 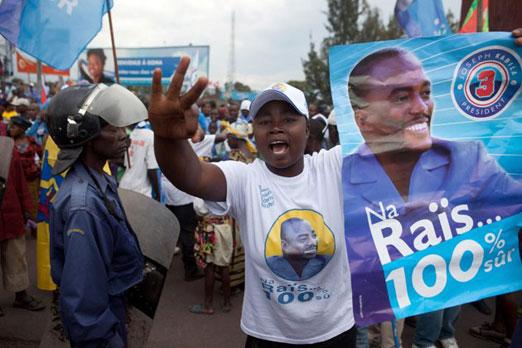 The future of the DRC is closely aligned with that of its President and supporters - Joseph Kabila.

In the aftermath of the 2011 presidential and parliamentary elections, which could be most charitably described as “˜chaotic,’ many Congolese voters, Diaspora members, and knowledgeable observers had hoped that the international community would react strongly to the fraud noted by most international and domestic observation missions.  While condemnation of the elections themselves and the vote-counting process was near-universal, strongly worded statements from Western donor governments had little effect beyond grabbing headlines for a few days.  In Kinshasa, President Joseph Kabila remains in power, opposition candidate í‰tienne Tshisekedi has not assumed what he believes to be his rightful position at the head of the Congoelse government, and most civilians have abandoned attempts at protesting and resumed their daily struggles to survive in one of the world’s poorest states.  Little has changed for the average Congolese.

What lies ahead for the people of the Democratic Republic of Congo, its leaders, and neighbors?  As has been the case for more than fifteen years now, the primary challenge for the next five years remains that of ridding the region of non-state armed groups, getting the military under the full control of the central state, and re-establishing effective governance over the full territory.  None of these tasks are easy, and there is no clear precedent for effectively undertaking them in a situation as complex and diverse as the DRC’s post-war landscape.  Put simply, nobody really knows how to make the Congo governable again. We know what is missing, but we lack directions for building such critical institutions as the rule of law.

What is clear, however, is that the prospects for increased peace in the short term seem greatly diminished in the election’s aftermath.  Tension is very high in the Kivu provinces, where, as Jason Stearns notes, alliances and fissures between CNDP commander Bosco Ntaganda, his CNDP and ex-CNDP troops, ex-PARECO Hutu militia members, and the FARDC (the Congolese national army) are changing rapidly and may lead to more violence.  Ntaganda’s status is particularly in question; while he is under indictment by the International Criminal Court and should be arrested by the authorities in Kinshasa, instead, he operates freely as a warlord in Goma. The reasons for this are many; Ntaganda is seen by some as a lynchpin of regional stability, holding together the secret rapprochement deal reached between Rwandan President Paul Kagame and Kabila in 2009. Ntaganda’s soldiers also played a key role in helping force through Kabila’s reelection effort; there were multiple reports that CNDP/ex-CNDP soldiers made voters in the areas they control vote for Kabila. Stearns suggests that Ntaganda may be losing the support he has enjoyed for these roles under pressure from international diplomats and because Rwanda desires to be seen as not being associated with his activities in the mineral sector.  All of this could lead to increased instability in the Kivus, as could the actions of Burundi’s FNL rebels if they use South Kivu as a base for operations in Burundi.

Ituri, meanwhile, is largely at peace and has been since fighting ended there in 2008.  However, the issues that caused intercommunal conflict there – particularly land rights and the claims to land by various ethnic groups – have never been resolved to anyone’s satisfaction.  The ICC conviction of former warlord Thomas Lubanga helps to show that there will not be total impunity for those engaging in violence in the area, but it is not sufficient to fully address the root causes of the Ituri war.  Few are paying attention to this region, but tensions there are still real and significant.

What about the rest of the world? Western advocacy groups chose attacking the conflict minerals crisis as their primary strategy for promoting peace in the DRC, based on the belief that it was an area in which the international community could have leverage and effect change.  Advocates in the United States succeeded in passing legislation requiring corporations to follow Securities and Exchange Commission-issued disclosure requirements, while the OECD is very involved with promoting due diligence procedures to promote the avoidance of Congolese conflict minerals as well.  While the SEC has yet to release its disclosure rules (despite being nearly a year behind the requirement imposed to do so by the legislation), the law has already had an effect on mining in the region: the Congolese government implemented a six-month ban on mineral sales from the Kivus and Maniema, then just as that ban expired, the major purchaser of Congolese minerals, the Malaysia Smelting Corporation, announced it would stop buying DRC minerals as it could not verify them to be conflict-free. This in turn put many Congolese miners out of work and caused others to move to the completely unregulated gold trade, and while there is anecdotal evidence that some soldiers have quit their militias altogether as a result of not having access to mineral wealth, it is evident that the de facto boycott on Congolese conflict mineral sales is likely to do little to end violence in the short-to-medium-term.  Without solid governance, armed groups can continue to operate with impunity and can rely on other lucrative sources of wealth to fund their activities.

The prospects for democracy in the DRC are also questionable. Although reaction to the obviously fraudulent 2011 elections was almost entirely negative, the international community has yet to effectively use its leverage to force real democratic change in Congo. It is unclear what will happen in the lead up to the 2016 vote. Will Kabila or his party attempt to change the constitution so he can stand for another term?   Will Tshisekedi, who is already advanced in age, be around and able to contest at the polls? Will other opposition leaders maintain their stance, or will Kabila be able to draw them into his circle with the promise of cabinet positions and other patronage?

We simply do not know. There are few reasons to be optimistic about the DRC’s next few years, but Congo is a country of surprises, with a population that is resilient and creative.  It is not an exaggeration to say that just about anything could happen – including a democratic, peaceful, sustainable future – but it will take a great deal of work to get there.

Tracking the progress of the vaccine rollout across the continent.   There has been a lot of focus on COVID-19 vaccine inequalities between high-income and low- and middle-income countries. For ...
By continuing to browse this site, you agree to our use of cookies.