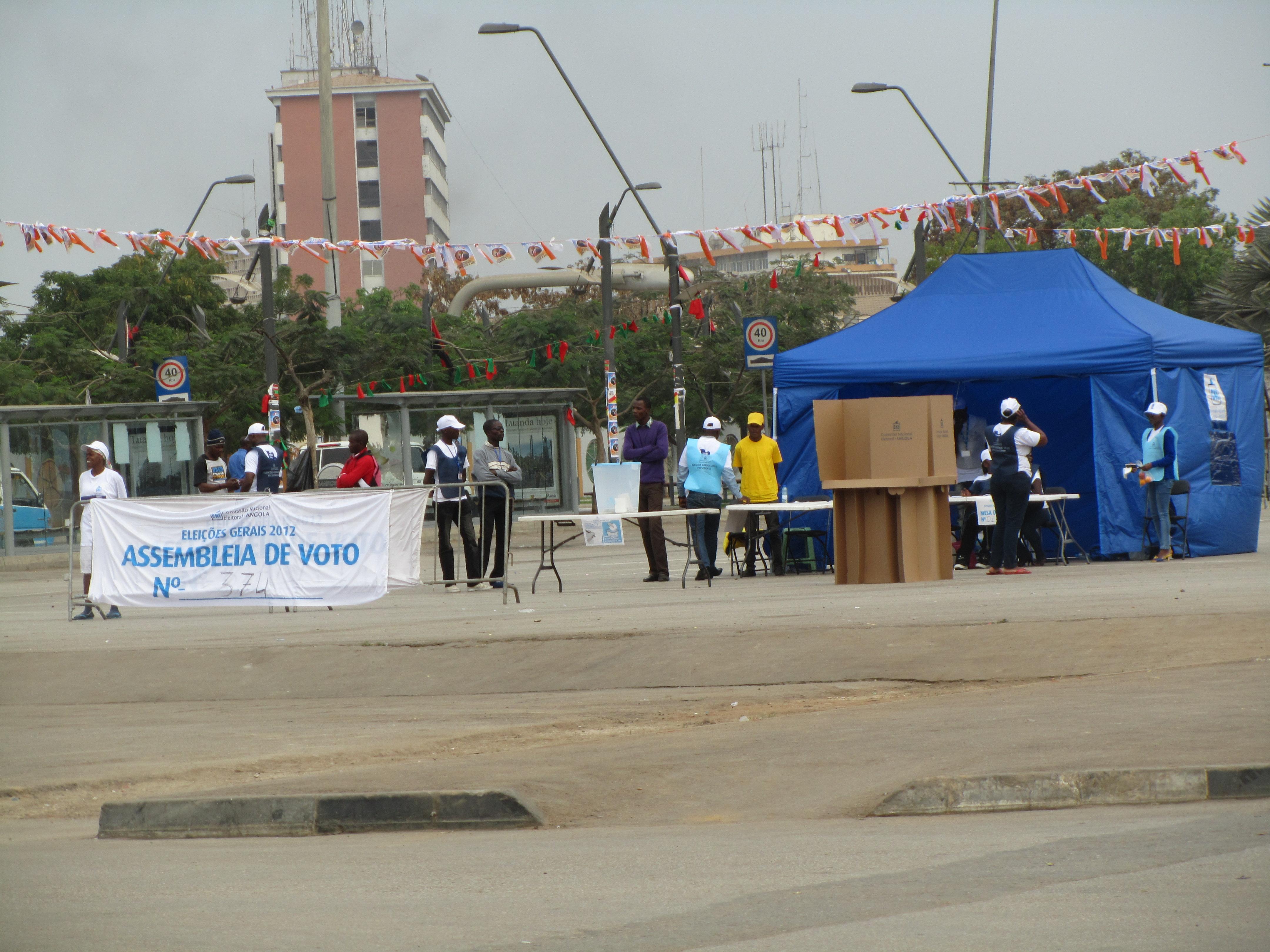 All quiet at a polling station in Luanda: turnout was historically low at 60 percent for the recent election.

The tent and the table that made up the polling station looked very small in the middle of the expanse of tarmac on Luanda’s Largo da Famí­lia. In one corner, journalists addressed their cameras against a backdrop with barely a voter in sight, let alone a queue. The hush was broken by the puttering of a scooter that slewed around the corner, ridden by two twenty-something men. “José Eduardo vai sair!” shouted the one on the back. “José Eduardo is going to leave!”

Not all of Luanda’s polling stations were as quiet as this, and whatever the guy on the scooter might have thought, President dos Santos remains very much in power. Nevertheless, this was an election where events and debates that took place on the margins were more interesting and more significant than the campaign manifestoes or what went on in the polling booths.

With the MPLA in power since 1975, Dos Santos at the helm since 1979, and the chasm between poverty and petrol-powered wealth becoming more evident each day, the script for the campaigns was never going to bring any surprises. The MPLA said it wanted Angola to “grow more and distribute better”, and Dos Santos toured the country unveiling flashy infrastructure projects of dubious utility: most notably the Cidade de Kilamba housing project and the $350 million reconstruction of Luanda’s waterfront. The opposition linked corruption and inequality to the president’s long incumbency, and called for a change in leadership. The ruling party, whose officials control much of the private as well as the state media, hit back with a familiar tactic: painting a picture of UNITA as the destroyer of the country in wartime, of Dos Santos as the “architect of peace” and the MPLA as the party that is now repairing the damage done by UNITA. Abel Chivukuvuku, a UNITA veteran who earlier this year founded a new opposition party, CASA-CE, was also cast as a wartime villain by the state media.

But in the final weeks of the campaign, the conduct of the election itself became the hottest issue. Opposition parties and civil society challenged plans by the CNE to change the procedures for the tallying of results in a way that put crucial stages of the process out of the sight of observers. The CNE did not back down, and the controversy gave an edge to the final days of campaigning. UNITA’s last public event in Luanda before the elections was as much a protest march as a campaign rally. There was talk that UNITA might withdraw from the electoral race altogether. On the eve of the elections, CASA-CE activists protested outside the electoral commission headquarters. Several, including a parliamentary candidate, were arrested along with a group of unsuspecting bystanders, and held in police custody over the weekend that followed the Friday election.

This newly proactive role by the opposition parties – insisting that the CNE play by the rules – seems to have drawn inspiration from the unprecedented political ferment of the last eighteen months. March 2011 saw the first of a succession of street protests calling for President dos Santos to step down and for a fairer distribution of wealth and opportunity. The protests were initiated by young people not aligned with any political party, who describe themselves as civic rather than political activists. The movement, which has survived some brutal attacks by police and plain-clothes thugs, found a new role for itself during the election by collecting information on irregularities in the process.

Behind two locked gates, a room at a safe house was turned into a communications centre. Forty mobile phones strewn across a table in the centre bleeped and buzzed with calls and text messages from across the country that were posted on a website www.angolaeleicoes2012.com. Some of the problems could be down to bureaucratic oversight: “A friend of mine is disabled, her name came up to vote in Cambiote when she should have voted in School 102 where she updated her [voter’s] card [with her current details]. She ended up not voting.” But others pointed to deliberate intervention in favour of the ruling party: “Polling stations 04.15.019 and 04.015.025 did not have delegates from parties other than the MPLA. These elections were fraudulent.” Or from a voter in the city of Lubango: “We were in the polling station at Nossa Senhora de Monte, we were obliged to leave the tables and the comrades [the MPLA] took care of everything, I wonder what the results will be?” And from the suburbs of Luanda: “At school number 906 in the Viana district, they prevented the UNITA delegate from checking.”

Activists around the country sent in the results posted at polling stations to create a public record that could later be used to check against the official results. In the days after the results were announced, opposition parties made a formal challenge to the CNE, citing procedural irregularities in the counting process, and discrepancies between the results listed by individual voting stations and those published by the commission. At time of writing, the CNE had rejected the parties’ application, and the matter is now before the Constitutional Court, though there is little prospect of the complaints being upheld.

The doubts about the electoral process, along with the lack of any systematic mechanism to investigate them, mean that the official figures are an unreliable indicator of the public mood. Still, some features of the published results are worth noting. The least ambiguous feature was the low turnout: barely 60 percent nationally. Part of this is down to the gaps and errors in the electoral register that prevented some would-be voters from exercising their right. Disillusionment with the status quo and lack of confidence in the opposition account for the rest of the absences. The official results leave the MPLA with almost 72 percent of the vote: a formidable victory by any normal standards, but ten percentage points down compared with 2008. UNITA took nearly 19 percent as against 10 percent last time, despite the potential challenge from CASA-CE, which as a first-time contender gained third place with 6 percent.

Both these tendencies – low turnout, and gains by the opposition – were more marked in Luanda than elsewhere. Only 56 percent of registered voters in the capital made their cross, and UNITA and CASA-CE between them took 40 percent of votes cast in a city long associated with the MPLA. Luanda’s residents enjoy access to a greater range of media than the rest of the country, and a freedom of thought and discussion that in rural areas is stifled by chiefs in the pay of the ruling party. In a city that last saw armed conflict in 1992, voters have little sympathy for the MPLA’s scare-stories about the opposition. UNITA attracted votes from many of by the poor residents of Luanda’s outer suburbs, for whom the oil boom has meant little other than housing evictions, transport problems and rising living costs. The former rebel movement also regained some of the votes that it lost in 2008 in its old Central Highlands heartland. CASA-CE did well in Luanda by attracting disillusioned MPLA voters who for historical reasons were not comfortable with voting for UNITA.

However large the MPLA’s majority, the lesson of the 2012 election is that the party cannot dictate the terms of political engagement as it has done in the past. People are talking ever more openly about corruption, poverty, electoral malpractice, and about their expectations of government. Fewer and fewer are being taken in by a rhetoric harking back to the war, and by the spending of public money on showcase projects as living conditions for the majority show no noticeable improvement. The youth protests that began last year were not party political, but the same impulse that gave rise to them has irreversibly changed party politics in Angola.

Justin Pearce is Research Associate in the Department of Development Studies, SOAS. He is author of An Outbreak of Peace.

Power and patriarchy have many strategies to resist action against sexual violence. But the #ArewaMeToo movement will not give up. Last November, I went to the police headquarters in Niger ...
By continuing to browse the site you are agreeing to our use of cookies.