Politics
Home›African Arguments›Politics›Uganda: oil and the age of entitlement – By Angelo Izama

Uganda: oil and the age of entitlement – By Angelo Izama 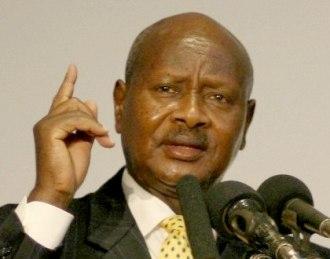 The uptick of Ugandan corruption reflects the fears of the political class over the coming post-Museveni transition.

At Forest Mall, errand boys and girls for Kampala’s wealthy families dash back and forth. The Mall is part of a string of new developments providing office space for banks, coffee shops and expensive boutiques. A cashmere sweater at one of these upscale hangouts costs 1.2 million Ugandan shillings – rather more than the starting salary of a university graduate at one of the banks here. There are signs of affluence everywhere.

And signs of trouble too.

The acquired tastes of Uganda’s better-off classes contrast badly with its downtrodden masses. Recently, the government here has put its faith (and invited others to do the same) in newly discovered oil and gas reserves in the western part of the country. It is these future funds that are the promissory notes used by politicians, led by President Yoweri Museveni, to suggest a brighter future is nigh. An ambitious Vision 2040 was recently published by the National Planning Authority with promises of investment in highways, education institutions and new energy projects. On its glossy cover was a picture of a rocket, perhaps delivering the first Ugandan to the moon. The wet dreams of the government and the political class around oil resources are part of the disappointing story that underpins the rising tide of inequality in Uganda.

In Uganda, there is not one single public works project that has ever been finished on time or within budget. This is because a large part of the money paying for the country’s cashmere exhibitionists and hedonists is ‘borrowed’ from the taxpayer. Corruption around public works is a billion dollar industry. According to reviews of government business, between 500-950 billion shillings is lost in procurement0-related malfeasance. Transparency International (an NGO that monitors and publicizes corporate and political corruption in international development) announced last month that Uganda was the most corrupt country in Eastern Africa. This illegal market is one cornered by politicians and civil servants.

Unsurprisingly, there is a debate on what this all means for public policy – especially since new wealth is possible with natural resources like oil. But it’s more than that. The underbelly of corruption in Uganda is not simply that it is tied to the politics of patronage, but rather that it is dependant on it. Corruption is not simply the great procrastinator of effective public policy (to which we will get shortly), nor is it simply simply abetted by the opportunities presented by official bureaucracy. The uptick of Ugandan corruption reflects the fears of the political class over the coming political transition, which heralds an uncertain period that may include change in the patronage networks. It is consequently not driven just by greed, but also by fear.

This is the real context of discussions over whether Uganda’s oil will be a blessing or a curse. By my calculations, if political transition from Museveni is placed on a timeline, it coincides almost exactly with Uganda’s transition to oil producer. Those within the oil sector predict the first commercial production will happen around 2017 or even 2020. By then Uganda will have a new President.

But one must concede that this view might be simplistic if placed within the context of the negative side effects of the bloated patronage and corrupt system. This month it emerged that Uganda’s most ambitious energy project – the Karuma hydropower dam – had been caught up in the spider’s web of powerful special interests. The tendering process may go into drawn out litigation as the selected executors of the project, Chinese companies, are being muscled out by other firms. According to the energy sector, Uganda needs to add at least 50 Megawatts every year to avoid debilitating load-shedding which recently caused street protests. Consequently, it is expected that in 2014 serious power shortages will emerge with potential political headaches just shy of another election. The Karuma story is a very Ugandan one.

Public works procured through dense official rules generally experience extreme delays as companies invest in politically connected middlemen to gain front row status. Bribes are paid. One insider says various interests dropped a premium of close to 2 million dollars on the Karuma process. Other projects, like the procurement of a National Identity Card, have similarly run aground. Investor confidence today in the oil and gas sector is ebbing due to similar reasons. Uganda discovered oil in 2006 and expected production in 2009, but timelines have been moved forward because of official red tape.

Corruption allegations over the main oil industry deal, the Tullow-Uganda farm-down to Chinese and French firms, are being “˜investigated’ by Parliament. Meanwhile, Development Licenses for promising wells have been pushed forward. Only two licenses in Buliisa district are on the verge of approval, while the Ugandan government seeks to install an oil refinery ahead of any further deals. The refinery project preparations managed by a Canadian firm is complete and should be presented to government in a few weeks. However, given the drudgery of procurement, one can expect that with a project of that scale (its cost is even bigger than the Karuma one), completion will be years away, as government works through a complex resettlement of villagers in the area and negotiates multiple contracts with the oil companies.

Nearby Kenya is fast-tracking its own oil program, and most industry watchers expect that the Kenyans will start production ahead of Uganda. According to government officials, one reason for Uganda’s snail’s pace is the obsession that the first gains from oil production will come in the form of a few hundred million in taxes and fees. One can only imagine what will happen as the circumference widens with new projects. Investors are likely to focus on Kenya and Tanzania, which while equally corrupt, have a better record of turning around public projects and already have domestic infrastructure for evacuating oil – including ports, pipelines and refineries.

An enlightened discussion on the cost of Uganda’s graft addiction is now needed. This is not a conversation about more laws or policies, it is a political conversation about the future of Uganda’s entitled classes and the elite bargain they need to make. As seen from the energy sector, there is a political price to pay for the continual procrastination surrounding public works. As political transition stumbles forward, crises will eventually bring the poor violently face to face with the eating classes.