Western Sahara is not Mali: on islamist extremists and Saharwi freedom fighters – By Celeste Hicks 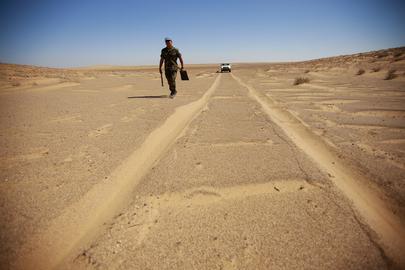 Following his most recent visit to Laayoune in November, the UN envoy for Western Sahara Christopher Ross said that “the conflict over the final status of the territory” has gone on too long.

Mr Ross is correct in saying the conflict has gone on too long – it’s now 21 years since a ceasefire was agreed between Morocco and the Polisario (the Saharwi independence movement); the next step was to organise a referendum which was to determine whether the people wanted to remain a part of Morocco – which annexed the territory illegally after colonial power Spain pulled out in 1975 – or opt for independence. That vote by indigenous Saharwi people and the thousands of Moroccan settlers who now live in Western Sahara has never taken place. Speaking to a number of UN officials from the Mission responsible for organising the referendum (Minurso) recently in Laayoune, the hurdles seem immense – it’s hard to see how it ever will take place.

But Mr Ross’s second assertion that it would be “a serious miscalculation to believe that the status quo can last, since it is now threatened by the rise of extremist, terrorist and criminal elements in the Sahel region” needs more analysis.

In a telephone conversation about Western Sahara to the Moroccan minister of Communications Mustafa Khalfi, I noted down three specific references to the current crisis in the Sahel. In one answer Mr Khalfi said that Morocco’s plan for economic development in the territory was with a view to ensuring “state stability”, explaining that the world “doesn’t need another failed state in the Sahara region”.

I believe this comment is indicative of Morocco’s campaign to convince politicians in Europe and the US that it is a bulwark of stability in a precarious region. Remember that as Ghadaffi’s regime collapsed in near-by Libya, it was remnants of his Tuareg supporters who streamed over the border into northern Mali to cause havoc with their newly-acquired weapons from his stocks – a region now dominated by extreme Islamist groups. Continuing political uncertainty in Tunisia and Egypt is a powerful argument for keeping the peace between Morocco and Western Sahara at almost any cost.

Much of the evidence for the “status quo being threatened by the rise of extremist, terrorist or criminal elements in the Sahel” appears to come from the case of three European humanitarian workers who were kidnapped in Tindouf camp in western Algeria, home to an estimated 40,000 refugees from the conflict between Morocco and Polisario in October 2011. When the three were finally released in July 2012, the kidnapping was claimed by MUJAO (Movement for Unity and Jihad in West Africa), an off-shoot from Al-Qaeda in the Islamic Maghreb (AQIM) which is now one of the dominant players in northern Mali. However, the precise circumstances around this incident are questioned; even last month Polisario’s Spanish arm – equally adept as Morocco at propaganda (if on a smaller scale) – told me that it was Morocco who arranged the Tindouf kidnappings; at the time AFP reported US sources suggesting that it could even have been the Polisario.

While it is possible that jihadists from Mali could travel the more than 1500 kilometres across the desert sands to Tindouf to implicate themselves in the Western Sahara conflict, it must not be forgotten what an enormous job they have on their hands in northern Mali. Reliable estimates for the collective number of fighters that MUJAO and AQMI can call on are hard to come by, but some analysts believe it may not be more than a few hundred. Ansar Dine, the other Islamist group operating in northern Mali, may have more members but cracks have already appeared between the so-called “˜foreign’ elements of AQMI and MUJAO (many of them are Mauritanians and Algerians) and Ansar Dine which is led by the Malian Tuareg Iyad Ag-Ghali.

Representatives from Ansar Dine recently attended peace talks in Burkina Faso chaired by Blaise Compaore, something AQMI and MUJAO have rejected. If the proposed “˜AFISMA’ Ecowas mission to reclaim the north of Mali ever goes ahead, surely the already-fractured Islamists would think twice about stretching themselves too thin?

An appreciation of the genesis of both the Islamic groups in northern Mali and the Polisario would also suggest the two would make unlikely bedfellows. AQMI started life as Islamist group GSPC which led a violent campaign against the Algerian state from the country’s south for many years – yet the main protector and advocate for Polisario and the Tindouf refugees has been the Algerian state in its ongoing hostilities with Morocco. While there remains a danger of disaffected young Saharwis taking up arms out of frustration, my visit to Laayoune showed me many of those fighting for independence see their cause as unique and not associated with regional politics; (for example when I asked civil society leaders if the Gdeim Izik protest camp which was broken up by Moroccan police in November 2010 was the start of the “˜Arab Spring’, several of them told me that it was a similar movement but was specially focused on the Saharwi’s circumstances).

In short, there is not much evidence that either the Malian Islamists or the Saharwi/Polisario are particularly interested in one another. Just as the collapse of Mali caught almost everyone (including me) by surprise, a simplistic reading of the over-arching terrorist threat in the Sahara may not be a useful prism through which to view the Western Sahara conflict. While widespread instability in the region is in no-one’s interests, responding to Morocco’s red flags about the danger of terrorist and criminal networks (smuggling networks have been running across the Sahara for years) risks absorbing the implicit message that only a strong Morocco can protect Europe and the US, and that any attempt to interfere in Western Sahara could tip a precarious balance.

Mr Ross needs to recognise the complexities of what’s going on further south in the Sahel, and not be seduced by Morocco’s pro-Western stance. The EU’s recent announcement that it has appointed a Rapporteur on Human Rights in Western Sahara (British MEP Charles Tannock) and its decision last year to rescind the EU fisheries agreement with Morocco because the Western Sahara problem has not been resolved are encouraging signs.

Celeste travelled with the assistance of the International Women’s media Foundation.