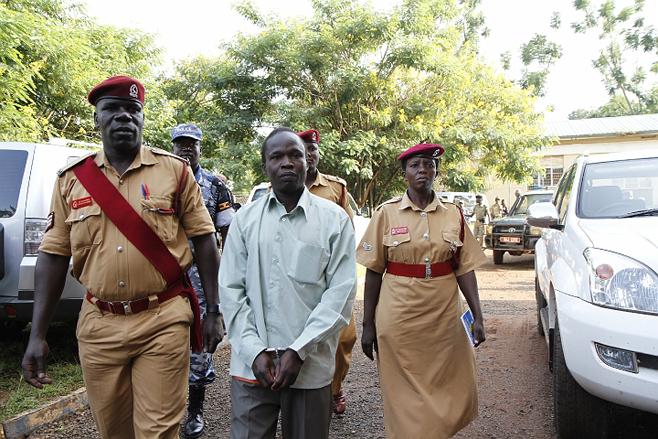 Lawyers for Thomas Kwoelo have accused the Ugandan government of illegally detaining him following the granting of an amnesty.

A decision by the African Commission on Human and Peoples Rights (ACHPR) on whether it would hear a petition to have Lord’s Resistance Army Commander Thomas Kwoyelo released from detention in Uganda was not delivered at its meeting in the Gambia last month as expected.

In 2011, Kwoyelo was found guilty of 12 counts of the war crimes of willful killing, taking hostages, extensive destruction of property and causing serious injury to civilians.

His lawyers have accused the Ugandan government of illegally detaining him after the country’s constitutional court ruled that he should be released following the granting of an amnesty.

A ruling on an appeal by Uganda of the constitutional court decision remains pending because the Supreme Court has failed to form quorum.

In October of last year, Kwoyelo’s lawyers petitioned the ACHPR to rule on his detention. Shortly afterwards, ACHPR Secretary Dr. Mary Maboreke indicated that the matter would be dealt with at the Commission’s 13th extraordinary session at the end of February.

Last week, the ACHPR was to determine only if it could exercise jurisdiction over the petition. A ruling on the actual petition would follow at a later stage if required.

It is unclear if the issue was even on the agenda, given the large backlog at the ACHPR.  Even Commission secretariat staff considered the proposed February date rather ambitious, and Kwoyelo’s lawyers did not travel to the Gambia. Their resources are limited however, given that they are working on the case pro bono.

The case of the previously little known rebel””captured by the Ugandan army in 2009″”has garnered much attention domestically and internationally, as it was the first to be tried before the International Crimes Division (ICD) of the Ugandan High Court.

The Court is seen as key to complementing the work of the International Criminal Court (ICC) in prosecuting grave crimes.

Not much was expected from the Kwoyelo trial when it began in August 2011. However, issues such as the protection of victims, witnesses and defense lawyers, victim’s participation, reparations and accountability for state actors have been hotly debated in Uganda as a result of the proceedings.

These discussions have taken place in the context of calls for truth telling, amnesty, and traditional justice from some quarters.

There is no victim participation at the ICD. It’s been suggested that because Uganda is a common law country independent participation of victims in trial processes is not allowed. There is also a big information gap among victim communities on the trial, resulting in a fall in interest.

For many women there are major obstacles to participation due to their roles and responsibilities in society (chores, rainy season/harvest, roles as the family’s primary care provider, no means of transport and no money to pay for it, limited access to information, illiteracy, husbands may not allow it, shame and stigma by victims of gender-based violence).

Meanwhile, some LRA victims in the Lango and Acholi regions do not feel greatly affected by the Kwoyelo trial as crimes against them were allegedly largely committed by different LRA commanders who are wanted by the ICC. Others see Kwoyelo’s trial as a punishment for his involvement in armed resistance against the Ugandan government.

Originally, the armed rebellion in northern Uganda was started by the Uganda Peoples Defence Army (UPDA) in 1986 because the Acholi people felt marginalized by their government. Over the same period, Alice Lakwena formed the Holy Spirit Movement. Whereas, the UPDA signed a peace agreement with the Ugandan government in 1998, the Holy Spirit Movement didn’t and was defeated in battle in the Jinja district of Uganda.  Joseph Kony then emerged and formed the Lords Resistance Army a rebel outfit in which Kwoyelo served as the fourth highest ranking commander until he was captured in Garamba Forest in the Democratic Republic of Congo in 2009.

No witness protection in place

With no rules of procedure and evidence, there is no witness protection scheme in place at the ICD. The judges have been using other means to protect witnesses, such as protection orders. A Witness Protection Bill is also being developed by the Ministry of Justice and Constitutional Affairs-Justice Law and Order Sector-(JLOS) and the Uganda Law Reform Commission (ULRC)).

Lack of witness protection makes it unlikely that women from the villages would travel to the ICD to testify. It would risk ruining their reputation and that of their children in the eyes of the community. If the husband did not yet know about the crimes, it’s also possible he would leave the victim which would create significant financial difficulties.

Gender-based crimes not in charges

Civil society actors have criticized the absence of sexual and gender based violence charges against Kwoyelo. They believe that the investigations in the field by the Director of Public Prosecutions were not sufficiently thorough.

In Uganda, victims of sexual and gender based crimes are often blamed for what happened to them. If the investigations were not sufficiently gender-sensitive, or the investigators not sufficiently trained on the specificities of these crimes, it is not surprising sufficient evidence wasn’t found, while indeed it is disappointing.

Despite calls from victims for housing, healthcare and education for their children as reparations, the ICD is not mandated to provide such at present. However, the Ugandan government is currently drafting a transitional justice policy which is likely to include a reparations component.

Truth-telling in the courtroom

However, victims want those responsible of ordering crimes to be held accountable through the justice system. Truth telling outside court is perceived as incomplete.

Finally, it is hoped that protection of victims, witnesses and defense lawyers, victim’s participation, reparations and accountability for state actors will improve as there are ongoing discussions.

Is all well in the teak forests ...