A Winter of Discontent for Somalia’s Beleaguered President – By Hassan M. Abukar 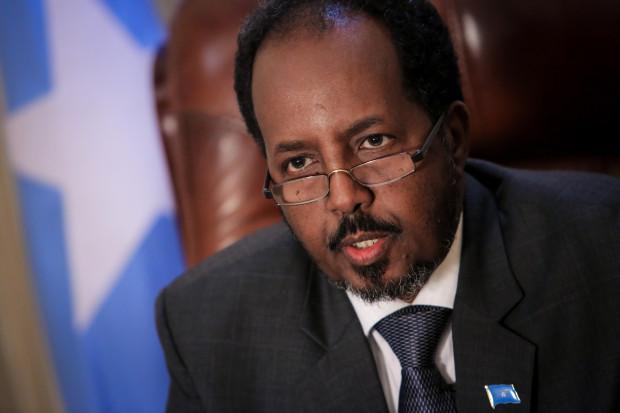 Mark Twain one said, “Get your facts first, and then you can distort them as you please.” When news of his demise spread like wildfire, Twain astutely remarked, “The reports of my death have been greatly exaggerated.”

Last week, Somali President Hassan S. Mohamoud had his Mark Twain moment. When Turkey sent a special plane to take Mohamoud to Istanbul, the Somali Government spokesman told the mass media the president was having a medical check-up. Several Somali websites reported that the president was suffering from a stress-related condition and he had been placed in intensive care; others even floated the bizarre idea that he had actually died.

After several days of silence, President Mohamoud gave a five-minute interview to Radio Mogadishu. He was furious he had been reported dead or was in intensive care. He contradicted his spokesman and stated he had come to Turkey to visit his wife and children. And yes, he’d had a medical check-up and the results were great.

A simple question about his health that required a simple answer morphed into a tirade against his rivals that lasted several minutes. “These rumors and innuendos are the work of the enemies of the Somali people,” he warned. “In fact, these gossip-mongers are supporters of Al-Shabaab.” To emphasize his fitness, the president asserted, “I am 100% healthy,” six times in five minutes. Repetition of the word “healthy” was accompanied by a dire threat to his enemies. “I ordered the Prime Minister and the Minister of National Security to investigate the people behind these false reports,” he added.

For the president, this has been a winter of discontent.

First, the West has all but abandoned his government. Last year, his government was heralded as the best option for ending Somalia’s two decades of chaos and anarchy. Western donors met in Brussels and pledged $2.5 billion to help the country rebuild itself from the ashes of ruin. British Prime Minister David Cameron convened an international conference in London to help Mohamoud and his government. Mohamoud also got a warm welcome in Washington, Rome, Tokyo, and other capitals.

Last July, the Somali government suffered a setback when the United Nations Monitoring Group for Somalia and Eritrea accused it of systemic corruption. The report concluded that 80% of aid given to the regime was missing, and the Somali Central Bank had become a “slush fund,” for the country’s officials. The bank’s governor was forced out and replaced by Yusur Abrar, a former Citigroup vice president. Then, the shocker came when Abrar herself resigned from her post after only seven weeks in office. She accused top government officials of graft and of pressuring her to open an account in Dubai so that funds from the Gulf States could be funneled through it instead of being deposited in the central bank. It was embarrassing for the government that Abrar submitted her resignation in the UAE where she felt safer after assassination threats against her in Mogadishu. Her resignation was so damaging to Mohamoud’s reputation that Western donors withheld all aid to Somalia. Mogadishu has yet to receive a penny from the $2.5 billion pledged by these Western donors.

Second, Turkey, the only government that had been transparently providing cash aid ($4.5 million a month) directly to the Somali Government cut its aid in late December, 2013.  When a Turkish official was asked if aid would be resumed, he said, “We have no such plans at this stage. It is not our agenda.” Fortunately for Mohamoud, his government is still getting millions of dollars from Qatar and other Gulf States, monies whose size and frequency have never been revealed.

Third, Al-Shabaab has intensified its bombings in Mogadishu, especially of the presidential compound. These terror acts are unprecedented in their ferocity and frequency. The lack of safety in the capital is a manifestation of the regime’s inability to reign in the terror group. Recently, James Clapper, the American Director of National Intelligence, accused Mohamoud of being weak and for heading a regime marred by chronic political infighting.

To add insult to injury, a confidential report by the UN Monitoring Group for Somalia and Eritrea, that was leaked to Reuters this month, accused the Somali government of diversion of arms to Al-Shabaab. “A key adviser to the president, from his Abgaal sub-clan, has been involved in planning weapons deliveries to Al-Shabaab leader Yusuf Isse Kabatukade who is also Abgaal,” the report stated. These were weapons the government purchased as part of the partial lifting of the UN arms embargo last year.

This is not the first time Mohamoud has been accused of having ties with Al-Shabaab. Last August, in an interview with a Somali channel, former prime minister and current parliamentarian Ali Khalif Galeyr accused Mohamoud of being in cahoots with Al-Shabaab. According to Galeyr, PM David Cameron of Britain had withdrawn an invitation to Mohamoud to attend the G-8 summit when the ties between Somali officials and Al-Shabaab leaders were uncovered.

The reports of Mohamoud’s ill health are indeed exaggerated. However, what is not in doubt is his growing isolation from the international community, especially Western donors and Turkey, a country that has been a stalwart supporter of Mogadishu. Mohamoud might claim to be as fit as a fiddle, but his government today is ailing with endemic problems of corruption, lack of financial resources, serious security matters, and poor leadership.

Hassan M. Abukar is a political analyst and can be reached at [email protected] .

Why I have been investing in African ...

Cameroon’s courting of Russian support has left France on the back foot.  Emmanuel Macron landed in Cameroon last month as the first French president in a decade fighting for his ...
By continuing to browse the site you are agreeing to our use of cookies.