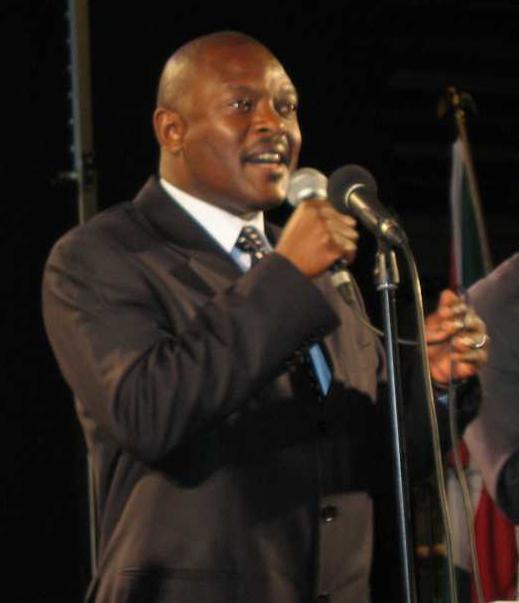 Pierre Nkurunziza will take some shifting from the top of Burundian politics.

Over the next few years, several countries in the Africa Great Lakes region are scheduled to hold presidential elections where the incumbent is constitutionally prevented from participating. In what may portend a regional trend, Burundian President Pierre Nkurunziza has been angling to remove presidential term limits so that he may run for a third term in 2015. After parliament narrowly voted down a series of constitutional amendments in mid-March that would have removed presidential term limits, the government announced that President Nkurunziza would indeed be running for re-election in 2015.

During its civil war, from 1993 to 2005, rebel groups from Burundi’s Hutu and Tutsi populations battled for control of the country. It is estimated that approximately 300,000 people were killed during the war. As part of the peace process, a new constitution was passed by referendum in 2005, and voters went to the polls later that year to elect a national assembly. Former rebel leader Pierre Nkurunziza was then selected by members of parliament to serve as president. He was re-elected in a general election in 2010 with almost 92 percent of the vote. The majority of the opposition, however, boycotted that election, claiming that fraud and intimidation were rampant.

Because of the country’s long history of ethnic antagonism and conflict between the majority Hutu and minority Tutsi populations, the new constitution explicitly forced a power-sharing arrangement between Hutus and Tutus to prevent ethnic domination by either group. In the National Assembly, Hutus must hold 60 percent of assembly seats and Tutsis the remaining 40 percent. Seats in the senate are to be evenly divided between Hutus and Tutsis. Legislation must be passed by a two-thirds majority. The vice presidency is held by two individuals, one Hutu and one Tutsi, and the president “is elected, by universal suffrage, for a period of five years, which can be repeated once.” The exact language of the statute, Article 96 of the Constitution, is important. The constitutional amendments proposed by the current government would have reduced the requirements to pass legislation to a simple majority, replaced the dual vice-presidency with a single prime minister, and removed presidential term limits. Taken together, they would undermine the spirit of reconciliation.

Shortly after Parliament rejected the government’s constitutional amendments, the government announced that Nkurunziza would absolutely be running for president in 2015. Because Nkurunziza was selected by parliament in 2005 as part of the Arusha Accords, hence indirectly elected, he is arguing that he is not yet subject to this condition. The opposition, however, argues that this interpretation contravenes the intent of the Accords which explicitly state that “[n]o one may serve more than two presidential terms.” According to the Interior Minister, the Constitutional Court will be tasked with deciding Nkurunziza’s eligibility.

It is possible that the international response to Nkurunziza’s attempts to secure a third term and his ultimate success or failure will influence the behaviours of other regional presidents who are facing similar circumstances. The Democratic Republic of Congo and Rwanda are scheduled to hold elections in 2016 and 2017, respectively. In both, the president will have reached his constitutional maximum term limit. Elections in Uganda are scheduled for 2016. The incumbent president, Yoweri Museveni, will most likely run for a fifth term, having overseen the removal of term limits in 2005, one year before being elected to his third term as president.

Since coming to power in Burundi in 2005, Pierre Nkurunziza’s regime has been associated with politically motivated detainments, imprisonments, and scores of killings. Former president Domitien Ndayizeye and six others were arrested in 2006 and charged with attempting to overthrow the government. Two of the alleged coup plotters were found guilty; five, including Ndayizeye, were acquitted. In 2011, it was reported that an intelligence operation to eliminate opposition supporters called Safisha (“to clean” in Swahili) was being carried out on orders of the ruling party. In 2012, Human Rights Watch was prevented from holding a press conference in the capital city that would have detailed the increase in politically motivated killings in 2011.

More recently, former vice president Frederic Bamvuginyumvira, a member of the opposition and one of the believed frontrunners in the 2015 election, was arrested in 2013 and charged with adultery and corruption. Several other members of the opposition have been beaten up and subject to extortion. At the beginning of March, 69 members of the opposition Movement for Solidarity and Democracy (MSD) who were “jogging” in the city center instead of protesting (protesting requires hard-to-get city approval) were arrested and charged with armed revolt. Within two weeks, 21 had been convicted and sentenced to life imprisonment. Shortly thereafter, the city government banned all group sports, including jogging, from taking place anywhere but in city-sanctioned parks or sporting grounds.

Although the ruling party appears willing to resort to extra-judicial means to secure its power, the government still defers to the constitution, perhaps because it is more than an institutional framework: it is also a peace agreement. Undermining it could therefore do more than entrench a power-hungry president; it could re-spark a civil war.

Dr. Stephanie M. Burchard is a research staff member in the Africa Program at the Institute for Defense Analyses and an adjunct professorial lecturer in the School of International Service at American University, Washington, D.C.