Conflict in South Sudan: refugees seek protection in Uganda and a way home – By Lucy Hovil 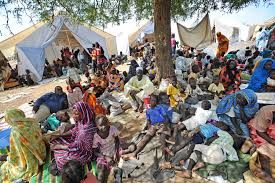 The independence of South Sudan symbolised a moment of extraordinary achievement and hope. On the one hand, there was optimism that independence had heralded a new era of equal citizenship for those in the South that would override the tensions and divisions of the old Sudan. On the other, this optimism was always countered by a strong degree of realism: many feared that the new dispensation would simply reconfigure the lines of power and reinforce the history of exclusion that lay at the root of Sudan’s fragmentation. The recent escalation of conflict, which has led to the displacement of almost a million people, appears to be a clear indicator of an emerging state based on exclusion rather than inclusion.

The International Refugee Rights Initiative has just released a report focusing on the plight of those who have fled the recent outbreak of conflict and are now living as refugees in Uganda’s Adjumani district, close to the border with South Sudan. Although by no means representative of the views of those impacted by the violence as a whole, their views give insight not only into the current circumstances in which many are now living, but also into the causes and dynamics of the conflict.

In the case of the former, this influx of refugees into northern Uganda has echoes of the previous war between the Sudanese government in Khartoum and a number of rebel groups across the country, which forced hundreds of thousands of Sudanese refugees to live in a situation of protracted exile. Most of those who were interviewed for this report had been displaced at least once before, and their (re)displacement points to the tragedy that is being played out for those who had returned with hope to South Sudan leading up to and after independence. Although even at the time of return there was strong realism about the fragile process of state-building that was underway, (see report) there was also optimism that the creation of South Sudan might give them the opportunity, as citizens of this new state, to construct legitimate spaces for belonging in the place that so many had called “home” for decades in exile.

Recent events, however, have undermined this hope and the stories and images of their (re)displacement create a terrible sense of déjí  vu. Once more, people are being moved into camps and settlements where a humanitarian crisis is growing by the day. The findings show that refugees are living in precarious circumstances, with inadequate humanitarian assistance and afraid for their own security. In addition, the government of Uganda is once again pushing refugees into settlements, despite the fact that these settlements have been shown in the past to be costly and to inhibit refugees from deploying creative coping mechanisms. In light of this, the report asks whether the “settlement policy” that puts refugees into camps – which is both expensive and inefficient for the state and makes the refugees economically vulnerable and at a greater risk from a security perspective – should be reconsidered.

In the case of the latter, interviewees were adamant that the roots of the current crisis lie in a major failure of governance in the country. The failure within the Sudan People’s Liberation Movement/Army (SPLM/A) to resolve their internal differences turned into armed conflict, spiralling out of control and spreading rapidly. They also talked of how ethnicity has been instrumentalised and manipulated by those in positions of power in order to create “sides” in a fight for control – which, in turn, allows for a monopoly by a few on the country’s resources. At a macro level, therefore, the conflict reflects a failure in state building in this new country.

At the same time, the interaction between national and local conflict dynamics was seen to be crucial. Interviewees emphasised the dysfunction that exists at a local level, which formed the context in which ethnic divisions were exploited. Many asserted that disputes over access to land and other resources are being manipulated by local leaders who are also deploying ethnicity as a tool of division when it serves their own ends.

Together, these narratives of inequality and poor governance at a national and local level tell the story of a conflict that is deeply embedded in structures of injustice that need to be carefully unpicked if sustainable peace is going to be achieved. As previously stated on this blog (albeit with a degree of controversy), any approach that focuses on a single narrative is likely to fail. Instead, a polity needs to be created that confronts and reverses the country’s legacy of injustice and partisanship, and replaces it with a state that ensures that all South Sudanese have equal legitimacy to belong at both a local and national level. Ultimately, therefore, for as long as the country’s crippling legacy of marginalisation and injustice remains intact, it is unlikely that there will be a durable end to the conflict. As the report concludes, it is vital that all efforts be made not only to resolve the conflict, but also to address the deeply embedded factors that allowed it to spread so quickly.

Dr. Lucy Hovil is a Senior Researcher on Citizenship and Displacement in the Great Lakes at International Refugee Rights Initiative based in London.