Politics
Home›African Arguments›Politics›DRC: Kabila eyes lifetime presidency and must be given a way out – By Theophile Costeur

DRC: Kabila eyes lifetime presidency and must be given a way out – By Theophile Costeur 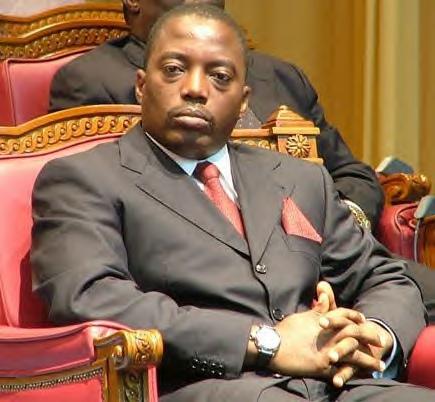 DRC President Joseph Kabila is making a bid for a lifetime presidency by changing the country’s constitution.

Current events in the elite politics of the DRC should be of great concern for those who follow developments in the country. Systematic efforts are being made by the Presidency and sections of the Presidential Majority to modify the 2006 constitution or, more likely, to have a new constitution passed by referendum. This would enable the incumbent President to abolish the current two-term limit to his presidential mandate. This new constitution would open the door for a lifetime presidency, leaving President Kabila in power until he dies or until he goes into exile. The extensive efforts made since 1998 to turn the bullet into the ballot risk being wasted. However, if concerted action is taken then the lifetime presidency can be prevented before it’s too late.

A first effort from the President to remain in power occurred during the 2013 National Dialogue which regrouped the major part of the political elite, majority and opposition.  President Kabila tried to turn the Dialogue into a forum on the modification of the constitution. This effort met with an almost total refusal from its participants and the final report included a statement of refusal to modify the constitution’s art. 220 (which limits the President’s mandate to two terms.) Unfortunately, this statement was eliminated from the list of one hundred priority recommendations drafted by the Dialogue’s follow up committee in December 2013.

Another scenario imagined by the Presidential Majority was the inclusion of the opposition in a government of national cohesion. As its members would very likely prefer to remain in power beyond the 2016 election deadline, this was a way to postpone the next elections and to buy time.  A variant of this idea was to put Senate President Kengo Wa Dondo in power as President of the Republic, to prepare for a return for Kabila after the completion of his term.

Until the end of June, it seemed likely that this would happen, until for reasons that remain unclear, Kabila put a halt to the idea and decided to force a solution. During the 30 June Independence Day parade, he displayed his Republican Guard in full force and sent a message that he remains in charge and controls important military means. During his speech he underlined that he would apply the recommendations from the National Dialogue, but without any haste…

From about mid-July however, the President’s PPRD party and some members of his Presidential Majority started a campaign in favour of the modification of the constitution. PPRD President Boshab and Presidential Advisor Kambila introduced the argument that the 2006 constitution was drafted by warring parties without any legitimacy, and that it was not adapted to the current situation which is oriented to the launching of the DRC as an “˜emergent’ country.

It is too easily forgotten that this same constitution was massively approved by referendum in December 2005 and that President Kabila himself, in his 18 February 2006 speech, declared that the vote was a victory for the Congolese people and not of one party over another; the constitution inaugurated a new era of institutional stability and a departure from the period of “˜transition’. Kabila explicitly referred to art. 220. Still, the head of the “˜Maison Civile’ of the President, Pastor Théodore Mugalu, called in an interview for a new constitution “that respects God” because the current constitution excludes God…

Indeed, why the sudden need to discard or modify the 2006 constitution? The more general argument against recurrent revisions is that institutions take time to take root, and that a constitutional modification with each new election (as happened in 2011 and is now scheduled for 2016) is not really conducive to constitutional stability. The current constitution was meant to inaugurate a new republic and to prevent a return to dictatorship. Does the country really need a new constitution adapted to the “˜new’ project of transforming the DRC into an “˜emergent’ country?

There is not a single element in the current constitution that would impede the DRC from taking this path, except of course if – and this is the real argument – one equates the person of Kabila with stability. But haven’t we heard this before under the Mobutu regime? A modification or the introduction of a new constitution very probably will lead exactly to the contrary: an economy to enrich the incumbents – who will no longer have to fear electoral sanction – and the likelihood sooner or later of a new rebellion or armed conflict. Monopolization of power in the DRC inevitably means that one needs military action to have access to power.

Obviously, nobody can object to a sovereign people voting in a new or modified constitution – provided this vote is transparent, free and fair. But it is hard to see how a constitutional referendum could be won by the incumbent President without the massive use of fraud: there seems to be a general rejection of Kabila’s rule all over the country. This is most explicit in his home province of Katanga – a result of his rule by and in favour of the private interests of the presidential family, with little concern for the population.

Another possibility would be the forced vote by the United Chambers of Parliament, as occurred in January 2011 – but this would give much less legitimacy to the operation than a (possibly rigged) referendum. The whole operation entails significant risks for the current regime. A key element in the setup is the ANR security service, which has been engaging in a campaign of intimidation of the opposition and the general population. This was shown by the arrest of the Secretary General of the UNC Party Jean Bertrand Ewanga and the previously unheard of short arrest of CENI President Malu Malu, respectively a Member of Parliament and an official with the rank of Minister!

If the entire project is implemented, and if it succeeds because of fear from the population or lack of an alternative, the consequences will be very serious. President Kabila will have eliminated all limits to the exercise of his power, and will remain until he dies or is forced into exile. His current rule in favour of his family will of course be intensified. The politics in favour of the enrichment of small elite will continue. Development will be limited to a series of symbolic and high prestige projects. A group of opportunistic and very mediocre managers will overtake all levels of power, in the image of the current ANR Director General. And most importantly: Official Lies will once again become the Official Truth, with all the devastating consequences this has on the country’s social fabric.

Where have we heard this before? Yes, under Mobutu, and previous Mobutu stalwarts such as Minister Kin Kiey Mulumba again occupy key positions.  A change of constitution will gradually imply a return to the point of departure in 1990: Mobutu.  Does this mean that fifteen years of endless suffering for the Congolese population will have been totally useless? Does this mean that twenty three years of struggle for a regime change will have been pointless? Does this mean that the international community since 1999 has wasted its time and money? This scenario should at all cost be avoided.

It is still possible to give President Kabila an honourable way out. He undeniably has his merits, most notably in putting an end to the 1998-2002 war, reuniting the country and in giving the country a new and forward looking constitution (yet to be fully implemented.) But all these positive points now risk being jeopardized, and the scenario set for a new war. What motivates Kabila is probably fear of what will happen if he steps down. It is possible (and crucial) to give him guarantees for his personal safety and the safety of his family.

But international pressure must also be discreetly stepped up and it must be made publicly clear that no international support exists for the return to a personal rule through the adoption of a new constitution. Pressure could potentially be exerted through selected neighbouring countries. It should also be made clear that the same rule of limits to presidential mandates will be applied to other African countries, such as Rwanda or Uganda.

Some say that it is “˜African’ to remain in power for a lifetime. It would be more correct to say that this era is gone and many African countries have witnessed a growing respect for the constitution, institutionalisation of a regime rather than a person and the end of personal rule.  Ultimately however, in the DRC, everything will depend on the emergence of a politically realistic and competent alternative to the current presidency. There are many, but they must have the courage to stand up.