Ebola in Liberia: Anatomy of a Politicized Response – By Richard Akum 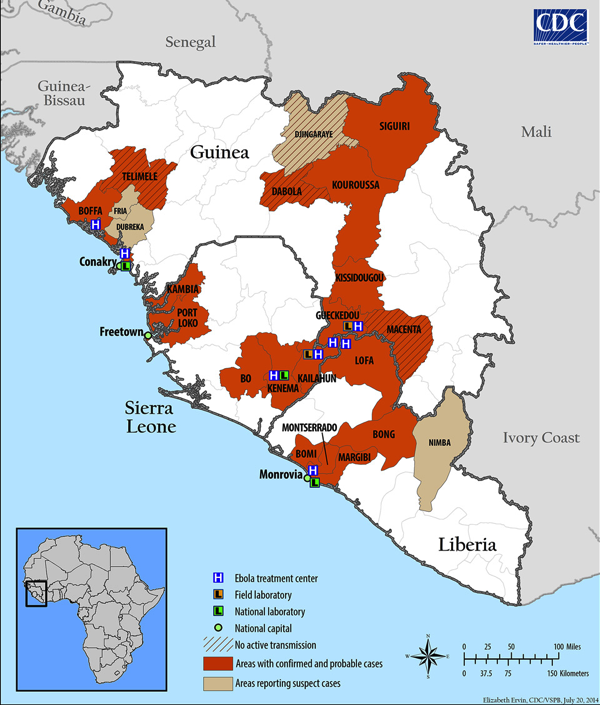 In March, 2014, I set out to explore the relationship between borderland livelihood dynamics and state-building in post-war Liberia. I was working from the premise that borderlands, as epicenters of regional conflict complexes, hold clues to the precariousness or resilience of post-war state-building projects. Especially since borderland livelihoods and modes of production therein (given their geography), interact with multiple states at any given time. Instead, an ill-fated outbreak of the deadly Ebola Virus Disease (EVD) in the forest region of neighboring Guinea would contribute to elucidating post-war politics and crisis mismanagement in Liberia (with the 2017 Liberian presidential elections on the horizon).

Borderland Connectivity and Spread of a Virus

Foya District, Lofa County, abuts Sierra Leone and Guinea with multiple official and non-official border crossings allowing human and material traffic between the economically interdependent cities of Foya, Liberia (pop. 19,522) and Gueckedou, Guinea (pop. over 221,00). At the Sorlomba border crossing on Foya’s outskirts, the Mankano River geographically delimits Guinea from Liberia. Here, a bustling trade in palm oil, rice and other agricultural produce creates subsidiary employment for transport bikers (locally known as pehn pehn), food and beer vendors, and boatmen who ferry traders from one river bank to the next.

Given the social and economic connectivity between both borderland communities, it was not surprising that on Monday, March 24 the first confirmed cases of the EVD were reported in Foya Borma Hospital. The Foya district hospital, with its contingent of dedicated local and foreign personnel, sits on a hill overlooking the district next to a Pentecostal church and the resident physician’s living quarters. This hospital has been of the frontlines of dealing with cross-border health care emergencies.

Foya community takes health care seriously – from the provisioning of community pipe borne water schemes, the construction and maintenance of public latrines, to raising awareness on malaria, typhoid and HIV/AIDS prevention as evidenced in the many sensitization banners which adorn the community. These banners are vestiges of long gone health campaigns mounted by international non-governmental actors, in “˜partnership’ with the GOL in the immediate aftermath of the Liberia’s civil war.

Throwing Punches While a Virus Spreads

In the age of the internet, the battery powered turn-dial transistor radio remains king of communication in Liberia, more so in the borderlands. As EVD made its entrance into Liberian public discourse, the airwaves were awash with the politicization of the Ebola situation.

2017 presidential hopeful, Benoni Urey, chided President Ellen Johnson Sirleaf for not caring enough for the Liberian people since she left the country to attend the Fourth Annual Euro-African Summit in Brussels, while the initial Ebola situation was unfolding. The Unity Party apparatchik responded by deriding the politicization of the Ebola crisis while insisting that the president was constantly updated on the situation. These were the first shots in a long war of political platitudes while a national public health emergency worsened. Despite the constant updates to the president the governmental response was marred by foot-dragging and mud-slinging.

For a country whose national security is largely dependent on United Nations contingents posted at country entry and exit points from the borders with Sierra Leone, Guinea and Cote d’Ivoire to Monrovia, Liberia remains largely institutionally ill-equipped to deal with an Ebola outbreak. The institutional deficiencies are exacerbated by the number of strikes for better compensation and working conditions by underpaid and overworked health workers (as well as other civil service sectors) in Monrovia over the months preceding the Ebola outbreak.

Factor in that about 29% of Liberia’s total population (according to the 2008 census lives in Monrovia), it is the most densely populated city in Liberia. Meanwhile other dense population centers like Lofa, Voinjama, Gbarnga and Kakata line the highway that links the Guinean borderlands with Monrovia.

This situation becomes even more dire when one considers the most common mode of transportation between Monrovia and Liberia’s borderland cities. The main mode of public transportation between Liberia’s cities is managed by the Liberian Federation of Road Transporters Union (FRTU). This union manages the flow of buses and “˜bush taxis’ which ferry passengers in very tight quarters making them an incubator for the spread of the disease in case an unsuspecting infected individual had a malaise while on the road.

Given the dire prognosis, which clouded a potential Ebola outbreak in Liberia, and the complacency of political actors, the first luster of a significant response came with Hon. Eugene F. Kpakar (Foya I) calling for a national emergency to deal with the impending health crisis on March 24. The political debate which ensued about the politico-economic versus health implications of a potential border closure, fed public complacency with criticisms about a potential ban on the eating of bush meat, perceptions of Ebola as linked to homosexuality, and a strange juxtaposition of resiliency through war and resiliency through the Ebola crisis.

As politicians in Monrovia deliberated on the response to the threat posed by the EVD, the rumour mill went into full effect. Neither did the absence of a proactive concerted and coordinated public information and public health campaign assuage the rumor mongering which gripped the Liberian public, further widening the credibility gulf between state and society. This was not helped by the announcement and later retraction from the Ministry of Health on March 25 that Ebola cases were reported at the JFK Memorial Hospital in Monrovia.

Who Will Campaign on the botched Ebola Response

As the confirmed cases of infection (14) and dead (1) from Ebola started being counted on April 1, the Liberian senate voted to close the border with Guinea. However, the political move needed to pass through the Liberian House of Representatives before presidential approval. Finally, Liberia did not close its borders until July 31, 2014, three months after the measure passed the Senate and after over a hundred deaths reported.

One thing is certain; the Liberian government’s response to the Ebola outbreak has not bridged the trust and credibility gap which separates the state from society. In an open election in 2017 where President Ellen is expected to stand down due to term limits, candidates will certainly run on the botched response to the Ebola outbreak. However, Liberians deserve better than just personalized political bickering, they deserve a debate on how candidates will take the country beyond postwar stabilization to a crystallization of gains made.

Richard Akum is a PhD candidate at the School of Oriental and African Studies, London.