NigeriaPolitics
Home›African Arguments›Country›West›Nigeria›Western partners can’t provide military assistance to fight Boko Haram, but here’s what they can do

Western partners can’t provide military assistance to fight Boko Haram, but here’s what they can do

The US and others may not be able to provide weapons to an army implicated in human rights abuses. But helping reform Nigeria’s prisons and police could have a real impact. 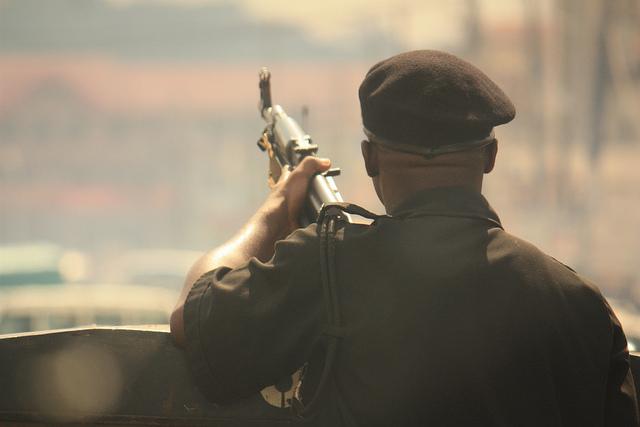 A police guard in Nigeria. Photograph by Stephen Martin.

The Nigerian military has committed a shocking array of human rights abuses during the war against Boko Haram. These violations have strained relations with international partners and decreased the government’s effectiveness fighting the militants. This issue appears to have reached an impasse, with Nigerian officials accusing the US and other international organisations of deliberately harming the war effort by refusing to provide military assistance.

From the US’ perspective, military assistance to units implicated in extrajudicial killings and maltreatment of prisoners is out the question, but there is another option. The international community could go a long way to improving the human rights situation in Nigeria by offering substantial yet conditional assistance for the country to undertake widespread police and prison reform.

Abuses in the security sector

Much of the evidence against the Nigerian government’s misconduct in the war on Boko Haram comes from Giwa barracks in Maiduguri, Borno State. According to Amnesty International, the barracks was not built as a detention facility and had capacity for only 100 detainees. Yet as the counterinsurgency campaign against Boko Haram heated up in 2013, the government captured massive numbers of prisoners suspected to be terrorists – and had nowhere to put them.

By mid-2013, upwards of 2,000 detainees were jammed into the barracks under deplorable conditions. Space was reportedly so tight that most detainees did not have room to sit. Prisoners received a handful of rice and stew a day for sustenance, and were so desperate for water that they often resorted to drinking one another’s urine. Between 2013 and 2014, around 5,000 people died in Giwa barracks, mostly due to starvation, hunger and disease.

In March 2014, Boko Haram attacked Giwa barracks and set free hundreds of detainees. Boko Haram took video footage of the prison break, which it used as propaganda to highlight government mistreatment and portray itself as a liberator, a pattern it had followed while conducting similar attacks.

The response of the Nigerian security forces was brutal. In the immediate aftermath of the attack, the Nigerian military hunted down and extra-judicially executed at least 600 detainees.  Many of the detainees were likely innocent, rounded up in random sweeps of Maiduguri.

The problems at Giwa barracks are emblematic of those in the Nigerian security sector as a whole. On the one hand, the security sector suffers from a lack of capacity. Conditions in Nigeria’s prisons are abysmal, and only one third of Nigeria’s prison population of around 60,000 have ever been convicted. On the other hand, the Nigerian security sector suffers from deep-seated structural problems of corruption, arbitrary arrest and abuse. A 2010 report by the Open Society Institute finds that summary executions, torture and rape are commonplace in police forces across the country.

The actions of the Nigerian security forces have brought widespread condemnation from the international community. The Amnesty report calls for Nigerian officials to publicly acknowledge and allow for the independent investigation of human rights violations by security forces, which run afoul of both international law and Nigeria’s constitution.  Nigeria’s consistent record of human rights abuse has also strained relationships with the US, whose laws prohibit military assistance to foreign military units implicated in systematic human rights abuse.

In response to international demands, the Nigerian security forces have closed ranks. Nigerian military spokesman Major General Chris Olukolande accused Amnesty of “blackmail” and of having an agenda to undermine the army’s resolve to fight terrorism. A similar view goes all the way to the top. In a recent visit to the US, President Muhammadu Buhari shocked many US officials by claiming US human rights laws “aided and abetted” Boko Haram.

The issue thus appears to be at an impasse. So long as Nigerian military forces continually run afoul of human rights laws, there is little that international partners appear willing to do beyond provide token support to a multinational force being put together to combat Boko Haram. The US and others are caught in a Gordian knot, able to only provide limited support for the war effort in fear of contributing to the same patterns of crude government violence that helped start the conflict in the first place.

However, international partners could be doing more to help the counterinsurgency campaign. And it starts and ends with getting serious about lending the right kind of support to aid Nigeria’s efforts at reforming its national police and prison system.  Attempts at prison reform have been ongoing since at least 2009, but have been hampered by a lack of funding and institutional resistance. More recently, President Buhari announced that the government would recruit 10,000 additional police personnel to strengthen the police’s capacity to fight the insurgency.

As Hilary Matfess points out, efforts to expand Nigeria’s justice system without taking on more fundamental reforms such as releasing massive numbers detained without trial and reigning in the conduct of the police are meaningless. Yet compromise may be possible. In return for a series of reforms aimed at limiting abuse, the international community should agree to fund a large international investment in the capabilities of the Nigerian police force.

The deal could work as follows. Before receiving any assistance, President Buhari could agree to either retire or dismiss all senior officials in the security sector with direct evidence linking them to human rights abuses. This should include most, if not all, the military officials named in the Amnesty report. The president should also agree to release a mutually agreed upon number of the 40,000 inmates (70% of Nigeria’s total prison population) held on non-violent charges with no evidence of connection to the Boko Haram insurgency.

In return, the US and other could agree to fund at least an $80 million dollar upgrade to the Nigerian prison system, which would be good for roughly one third of the prison system’s $238 million annual budget. The funds could primarily be used to upgrade the infrastructure of the existing system and ensure the more humane treatment for existing detainees rather than recruiting additional police.

If implemented properly, such an investment could be sold as a win for Nigerian politicians, who are seeking to shore up their national security credentials in a time of war and budgetary crisis. It is also a win for the international community, who could rightfully claim that they had a hand in Nigerian efforts to clean up its corrupt and abusive security sector. And it strikes a blow against Boko Haram, which has used the Nigerian security sector’s maltreatment of ordinary citizens to justify grisly attacks and recruit new members. Most of all, it would be a win for the Nigerian people, who would suffer less and become more secure.

No amount of international money will fix the deep-seeded structural problems plaguing the Nigerian security sector. But under the right conditions, the international community can play a constructive role in the long road to reform.