The UK needs to stay out of Zimbabwe’s succession politics

Whether the UK favours Mnangagwa over Mugabe and Chamisa over Tsvangirai is immaterial. What matters is that it remains a disinterested bystander. 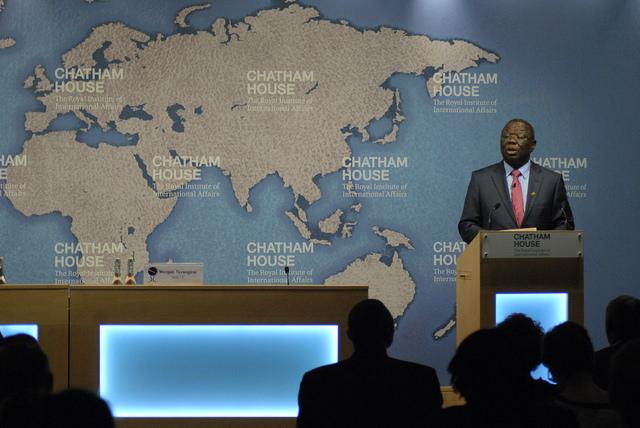 Last week, opposition leader Morgan Tsvangirai sparked controversy in Zimbabwe when he claimed that foreign diplomats he’d spoken to had revealed a preference over who the country’s next president should be. Speaking to journalists, the MDC-T party leader said: “I was with one of the ambassadors [in Harare] who was talking about [Vice-President Emmerson] Mnangagwa being a pragmatist”.

Tsvangirai’s suggestion that Western diplomats favour Mnangagwa made headline news in Zimbabwe and re-energised debates about who will eventually succeed the 91-year-old President Robert Mugabe. Mnangagwa, a seasoned minister within the ruling ZANU-PF, is seen as one of the most likely candidates.

In the succession debate, the shifting stance of certain Western states has been deliberated amongst Zimbabwe’s political elites for many months now. And Tsvangirai’s assertion that Mnangagwa is the preferred figure is supported by sources in Harare and London. These insiders suggest that at least one Western country − the UK − sees the Vice-President as a reformer and an improvement on the man who has been in power since 1980.

It is unclear which ambassador Tsvangirai was referring to in his statement, but if it was the UK’s, this would mark a significant change of policy for the country after a decade of trying to expedite Mugabe’s exit from power. From 2000 to 2013, Zimbabwe’s former colonial power strongly backed Tsvangirai, before changing tack after his decisive defeat in the 2013 elections. The British Embassy’s internal poll at the time reportedly projected that Tsvangirai would garner 60-65% of the vote, but when Mugabe romped to victory with 61%, the diplomatic mission was caught off guard.

Since then, a programme of pragmatic re-engagement with Mugabe’s ZANU-PF government has gradually emerged from the vestiges of the previous failed policy. And it is this approach that informs the UK’s preference towards Mnangagwa.

This move away from Tsvangirai also explains the opposition leader’s decision to publicly reveal the West’s policy shift, though his revelation could also be a strategy of deflection. Much as he refuses to stand down as MDC-T leader, Tsvangirai probably realises he will never now be president, and by outing some Western states’ changed stance, he could be trying to lay the fault for the opposition’s current weakness at the door of his unreliable former allies.

However, the relationship between the UK and Tsvangirai was never perfect for either side. Tsvangirai’s inadequacies as an effective opposition leader have become all too transparent over the years, while the UK and other European countries let the opposition leader down on many occasions. As long ago as 2006, Tsvangirai disclosed to me in an interview that the West made the “mistake” of insisting on regime change in Zimbabwe and that this undercut his credibility with African leaders. The West “should have insisted on democratisation”, he said.

The UK’s break from Tsvangirai has implications on various fronts. One of these is that it undermines the standing of democracy and human rights. From 2000 onwards, the UK inserted itself in Zimbabwe’s domestic politics claiming to do so in the name of these ideals. And the fact that Mnangagwa − one of Mugabe’s point men in the mass killings in the early-1980s and in the political election violence in 2008 − has now reportedly found favour with the UK reinforces perceptions that democracy and human rights have only ever been a fig leaf for the UK’s own agenda.

The fact that the UK’s apparent partiality towards Mnangagwa has become known well before Mugabe leaves office also reflects the diplomatic mission’s lack of discretion − especially with Mugabe having said he intends to run for re-election in 2018 − and could have an impact on those very succession dynamics. Mugabe could interpret the UK’s preference for Mnangagwa as his arch-enemy choosing his successor. Indeed, one of the allegations Mugabe used to justify his purge of former Vice-President Joice Mujuru in 2014 was that she is a moderate reformer who had proven acceptable to America. The UK’s bias for Mnangagwa may prove a kiss of death for this long-time presidential aspirant too.

Discussion of the UK’s interest in Zimbabwe’s succession politics goes beyond ZANU-PF and the presidency, however, and involves the opposition as well. Since his 2013 election defeat, Tsvangirai has viewed Nelson Chamisa, the MDC-T’s former National Organising Secretary, as a threat to his continued hold on party power. And not only does Chamisa enjoy a close but unclear relationship with Mnangagwa − an association that is much debated in elite circles and one Tsvangirai is said to be ill at ease about − but it is also alleged the UK now favours Chamisa as MDC-T leader over Tsvangirai. The conjecture goes even further and suggests the UK is hoping for a post-Mugabe alliance between Chamisa and Mnangagwa.

To an extent, the degree of truth behind the UK’s reported preferences towards Mnangagwa, Chamisa or perhaps an Mnangagwa-Chamisa coalition is immaterial. What matters most for the moment is that Zimbabwean political elites believe the UK is trying to intrude in MDC-T and ZANU-PF succession politics, a sense that has been intensified by Tsvangirai’s recent comments. And after 36 years of applying double standards in its foreign policy towards its former colony, concerned Zimbabweans insist that there is no place for the UK to intervene. As the country reaches a crossroads and the long era of Mugabe vs. Tsvangirai draws to an inevitable close, the message from Zimbabwe is basic and unswerving: the UK must be a disinterested bystander in what happens next.