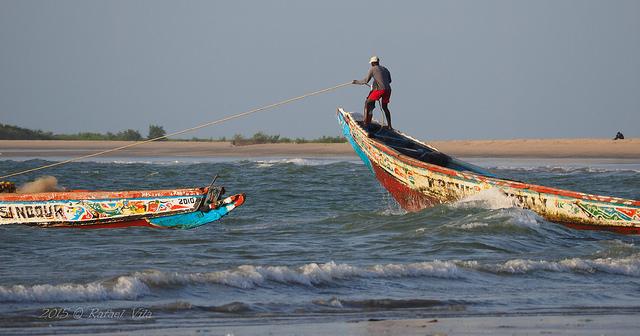 What should we keep an eye on as the Gambia deepens ties in the Middle East? Credit: Rafael Vila.

On 11 December 2015, President Yahya Jammeh unexpectedly declared the Gambia “an Islamic Republic”. He proclaimed that the decision was “in line with the country’s religious identity and values”, referring to the fact that 90% of the population is Muslim.

In order to enact his vision and make it official, a bill is due to be submitted to Parliament, while the national flag is set to be modified. These moves will likely face legal and political challenges − according to a member of the opposition, “there is a constitutional clause that says that Gambia is a secular state,” which can only be removed via a referendum – and could drag on for some time.

However, in the meantime, it is worth looking more closely at the proposal. Some possible motivations behind the declaration have already been debated here on African Arguments, but the move warrants further attention including in terms of the possible repercussions for broader geopolitical dynamics.

[See: What does Jammeh have to gain by making The Gambia an Islamic Republic?]

Looking to the motivations behind the move, Jammeh’s declaration could be aimed at ensuring political survival ahead of the presidential elections scheduled for December. For instance, the move has given him added religious legitimacy, with national Islamic leaders − in particular the Supreme Islamic Council and the Banjul Muslims elders − expressing their support. Meanwhile, the decision also adds to his anti-Western and anti-LGBT rhetoric, which could help him gain stronger support amongst certain voters.

However, it is perhaps internationally that Jammeh’s declaration is most important and could be directed at countering Gambia’s growing isolation.

Since coming to power in 1994 following a coup d’état, Jammeh’s regime has been consistently accused of human rights violations, damaging its international image. This trend was aggravated in 2013 when Gambia left the Commonwealth, and then in 2015 when Jammeh threatened to withdraw Gambia from the African Union.

[See: Between a rock and a hard place: Gambians tackle Fortress Europe]

This loss of revenue has been coupled with a 60% decline in tourism (which comprises 40% of GDP) in 2014 following the Ebola outbreak in West Africa and Gambia’s expulsion from the US preferential trade programme known as the African Growth and Opportunity Act (AGOA).

Looking east, the Gambia’s relations have also suffered. In 2010, the country broke ties with Iran after it was confirmed that an illegal weapons shipment discovered on its way to the Gambia had been sent by an Iranian company. And in 2013, relations with Taiwan were ended as Jammeh tried to curry favour with China.

Within West Africa, the Gambia is also increasingly isolated. In 2015, the regional West African bloc ECOWAS proposed imposing a two-term limit on all member states’ leaders, but the plan was dropped after Gambia and Togo opposed it. Furthermore, tensions in the contested Casamance region have contributed to a deterioration of relations between the Gambia and its only neighbour, Senegal.

Given this adverse international context, Jammeh has been looking for new sources of support, and the politicisation of the Gambia’s Islamic identity could serve to help strengthen ties with the Islamic world, especially in the Middle East.

Financial aid from the Middle East has already become more significant to the Gambia recently. According to an OECD report, the Gambia’s five biggest contributors of development finance in 2013 included two new faces (compared to 2006) − the United Arab Emirates (UAE) and the Arab Bank for Economic Development (BADEA) − while other Middle Eastern-based donors have also been growing in influence.

BADEA provided Gambia with $119 million in financing up to June 2015, with secretary-general Sidi Ould Tah saying the institution wants to strengthen solidarity between the Arab world and Gambia. And, amongst others, there has been a growing role for the Islamic Development Bank (IDB), which now has the 111 projects in Gambia.

The government has also been deepening bilateral ties in the Middle East. In November 2014, Jammeh visited Qatar, which has donated funds to 243 humanitarian projects. Meanwhile, the president has also travelled to Saudi Arabia, Kuwait, Turkey, and the UAE in the past few years.

What implications could this have?

The Gambia’s deepening ties with certain Middle Eastern countries could have consequences for the country and region on a number of fronts, but as much of West Africa grapples with the threat of Islamist militancy, one significant dimension could be that of security.

In 2010, Wikileaks disclosed a memo from then US Secretary of State Hillary Clinton, saying that “donors in Saudi Arabia constitute the most significant source of funding to Sunni terrorist groups worldwide” and also made reference to the UAE, Kuwait, and Qatar in the same context. Although there are many uncertain factors to take into consideration, there are some concerns that Gambia’s dependence on these countries could increase the likelihood of Islamist militants expanding into its territory.

The Gambia is already arguably vulnerable on this front. It suffers from some of the dynamics often associated with recruitment to militant groups, such as endemic corruption and high youth unemployment. Moreover, the country is surrounded by Senegal, where Islamist militancy has reportedly been expanding, and is nearby to the likes of Mali and Mauritania which have faced similar problems.

France’s Operation Barkhane in northern Mali has also forced Islamist militants to search for additional financing and other operational centres along the southern porous borders. And recent attacks in Mali, Burkina Faso and Ivory Coast suggest some Islamist militant groups are already planning to expand to new territories.

In this context, it is also worth highlighting the alleged link between militants and narcotrafficking in West Africa and the Sahel, as well as the illegal drug trade footprint in Gambia − an activity in Jammeh has sometimes been rumoured to be involved. These factors could add to the Gambia’s appeal as a potential financial hub.

Another possible goal of Jammeh’s declaration could be to help the re-establishment of ties with Iran, one of the handful of already established Islamic Republics. Especially following Tehran’s thawing of relations with the West, it perhaps makes sense for the Gambia to seek a rapprochement for both economic and diplomatic reasons. And it may also be significant that rivals Senegal, whose relations with Iran also broke down in 2011, resumed ties with Tehran in 2013.

It remains to be seen whether a rapprochement is really likely, but in terms of Iran’s international projection, one issue of note is the Lebanese Islamist group Hezbollah, whose main supporter, financial backer and ideological engine is Tehran.

There are various rumours that Lebanese companies in West Africa have been funding vehicles for Hezbollah through money laundering as well as diamond, drug, and arms trading. In February 2011, the US placed the Lebanese Canadian Bank − which owns Prime Bank in Gambia − on its blacklist due to alleged ties with Hezbollah. And in June 2013, it imposed sanctions on four Lebanese nationals living in Senegal, Gambia, Sierra Leone, and Ivory Coast, for similar alleged links.

While the reality of these ties is disputed by many, there are signs that Jammeh might tolerate such links if they do exist. For instance, in June 2015, the president rescinded the decision to deport Husayn Tajideen, a Lebanese rice importer and owner of the country’s largest mall, who was accused by the US of providing financial support to the group. Additionally, Gambia’s decision not to join the Saudi-led military alliance, which was partly created in order to contain Iran’s sphere of influence, could signal Jammeh’s reluctance to antagonise Tehran.

Separately, it is also notable that Shi’ite Islamic movements have been expanding in West Africa and given Iran’s Ayatollah is the leader and protector of the global Shi’ite community, this could bestow on Iranian authorities a stronger sense of responsibility in the region. At the same time, the Saudi monarchy sees the spread of Shi’ism as inseparable from Tehran’s foreign policy, and Saudi Arabia may want to contain the spread of Shi’ite communities. The combination of closer ties to Banjul and higher stakes for both Iran and Saudi Arabia could bestow upon the Gambia a newfound geopolitical significance.

It is too early to tell exactly what the impacts of deepening ties in the Middle East will be, and to what extent making the Gambia an Islamic Republic could accelerate these trends. However, in a context in which several West African countries are facing the challenges of containing militant Islamism, the important thing to note is that the decisions of the tiny Gambia and its enigmatic President Jammeh could have more repercussions for the wider region than one might expect.