Senegal: Why did President Sall pardon a rival convicted of embezzling over $200 million?

Karim Wade (aka “The Minister of Earth and Skies” and “Mr 15%”) is the influential son of the former president and could run against Macky Sall in 2019. 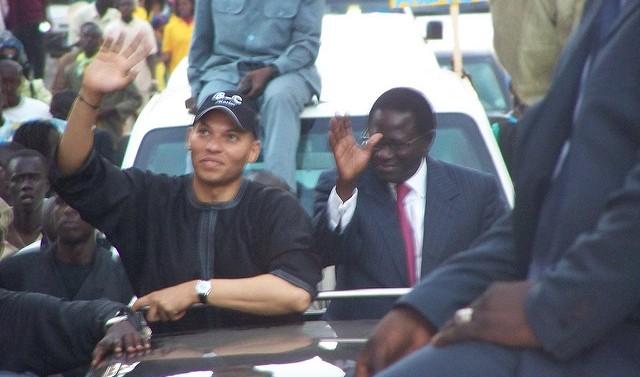 Karim Wade on a parade in 2009. Credit: Serigne Diagne.

At the end of last month, Karim Wade, a divisive figure in Senegal who was in prison on charges of high-level corruption, was granted a presidential pardon.

Wade, the son of former president Abdoulaye Wade, had been serving a six-year sentence for illegally accumulating over $200 million during his father’s rule. But having served just three years of it, President Macky Sall released the 47-year-old, who promptly jumped on a plane to Qatar.

This decision by President Sall – who came to power after defeating Abdoulaye Wade in the 2012 elections on a platform of tackling corruption and poverty – has split opinion. Supporters of Karim Wade are delighted to see him back as a free man and see the pardon as a magnanimous concession from the president. But others worry that it sends out exactly the wrong message in the fight against graft and wonder what this means for Sall’s anti-corruption platform.

During the presidency of Abdoulaye Wade from 2000 to 2012, Karim held a number of often overlapping ministerial positions including in infrastructure, energy, aviation and transportation. He oversaw several huge projects and, at one point, was reportedly responsible for one-third of the entire state’s expenditure.

This led Karim to be popularly dubbed the “Minister of the Earth and Skies”, though he was also called “Mr 15%” by a US ambassador in leaked cables, referring to his alleged stake in big contracts.

There was also a widespread belief that President Wade saw Karim as his heir apparent and was trying to line him up to replace him. This led to anger amongst many Senegalese, particularly in the run-up to the 2012 elections as Karim’s awkward attempts to speak Wolof highlighted, in the eyes of many, the fact that he has spent much of his life in Europe. In the end, however, President Wade lost the 2012 elections.

Under the new presidency of Macky Sall, an investigation was launched into Karim Wade, accusing him of illegally amassing $1.4 billion over the course of his years in office and linking him to a complex web of off-shore accounts in Panama and the British Virgin Islands.

Wade’s lawyers denied the charges, but he was eventually found guilty of diverting over $200 million for personal enrichment. He was sentenced to six years in prison and fined $230 million. Although he has now been pardoned from his jail term, it has been made clear that he is still required to pay the fine.

Despite Wade’s conviction, he has remained a significant political figure in Senegal. He is a key member of the main opposition party, Parti démocratique sénégalais (PDS), which is still led by Abdoulaye Wade. And PDS has even appointed Karim as its presidential candidate for the 2019 elections, though it is uncertain whether he will be eligible due to his dual nationality and conviction.

Meanwhile, Karim Wade also has close links to important Muslim organisations in the country such as the influential Mouride Brotherhood.

It is these various alliances that could explain why President Sall would pardon a man who was found guilty of widespread corruption, is so closely associated with his predecessor’s rule, and could run against him in 2019.

To begin with, some observers suggest Sall may be trying to curry favour with leading Muslim associations in the country by releasing Wade. It is notable, for instance, that the announcement to grant a pardon was made during Sall’s visit to the holy city of Touba where  he was meeting with Serigne Cheikh Sidy Makhtar Mbacké, the Caliph General of the Mouride Brotherhood. And shortly after, Sall travelled to Tivaoune to repeat the news to Cheikh Sidy, the leader of the Tijani fraternity.

“I suspect President Macky Sall must have come under serious pressure from Senegal’s popular Muslim sect in which Karim Wade is a strong ally,” says political analyst Frederick Tandeng.

Furthermore, in terms of political calculations, there are suggestions Sall felt comfortable releasing Karim Wade because he does not see him as a political threat and because is attempting to forge closer ties with the PDS. Given his conviction and unpopularity amongst many Senegalese, Karim Wade’s presidential prospects may turn out to be relatively weak. And despite officially being his political opponents, Sall’s pardon may have been part of an attempt to draw on PDS support in his attempts at constitutional reform and political manoeuvring going forwards.

Will this haunt Macky?

It is likely that a range of factors influenced Sall’s decision, but one thing that is certain is that the pardoning of a man found guilty of exploiting his influence to embezzle hundreds of millions of dollars has divided opinion in Senegal.

Some, such as Famara Ndoye, a young voter, are delighted to see Karim back on the streets. “I love Wade more than Macky Sall because Wade always gives to the poor and he is generous,” he told African Arguments.

But by contrast, others such as politician Mamadou Ndoye have denounced the pardon, claiming it sends a signal that anyone can steal government funds and go scot-free. “A precedent has been set so I will not be surprised if a similar occurrence happens in the near future”, he said.

Civil society groups such as Y’en a Marre have echoed such concerns, while Idrissa Seck, former prime minister and leader of the Rewmi party, has condemned the release, claiming it was influenced by “international players”, and accused Sall of “violating his word”. Some observers believe that Seck and Rewmi are the political threat that Sall is really concerned about.

Sall has made a political gamble in releasing Karim Wade, and as he sees out the next few years of his term, it will become clear whether his calculations prove to work in his favour or whether observers such as analyst Tandeng will turn out to be right when he says: “The release will surely come to haunt Macky Sall in the near future”.

Alpha Kamara is a Senegalese journalist and producer