Zimbabwe: How long can Mugabe survive without the war veterans?

The war veterans and Emmerson Mnangagwa have been key pillars underpinning Mugabe’s 36-year-long rule. Without them, it could quickly disintegrate beyond repair. 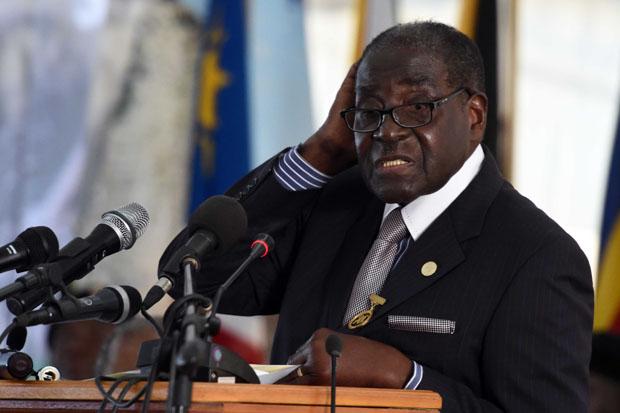 For decades, the war veterans have been indispensable allies of Mugabe and have been central to the manner and maintenance of his 36-year-long rule. So it was a momentous moment when elements within the association declared:

“We are dismayed by the president’s tendency to indulge, in his usual vitriol against perceived enemies, including peaceful protesters, as well as war veterans, when the economy is on its knees.”

This kind of defiance is unprecedented and the government responded in similarly strong fashion, albeit after a few days hesitation. This Saturday, Zimbabwe’s defence minister called the move “treasonous” and tried to discredit the statement as the work of infiltrators, saying: “There is no war veteran who would be so disparaging about the president”.

Although it seems that the government is just trying to delegitimise the war veteran association’s statement, which seems to have clear backing from several people, Mugabe will hope that his defence minister is correct – because if he truly has lost the support of the war veterans, this could well be the beginning of a swift end.

President Mugabe owes a lot to the war veterans, starting with his very ascendancy to the leadership of the ruling ZANU-PF. During the war for independence, Mugabe was an initially a relatively minor figure in the ZANU rebel movement’s leadership, until in 1975 when support from guerrilla fighters elevated him to the head of the militant ZANU faction. The close bond between Mugabe and his allies was forged, with long-running consequences.

Since Zimbabwe’s independence, the war veterans have been richly rewarded. They have been given senior positions in security, government and parastatals. Through their military positions, they have been the greatest recipients of state patronage, including in the lucrative diamond industry. And in 2014, Mugabe even created a new ministry just to cater for their welfare.

The veterans’ apparent decision to turn against their long-standing patron could be connected to the “unbridled corruption and downright mismanagement of the economy” that they note in the communiqué. And it could be related to the government’s treatment of “peaceful protesters” that they denounce.

But given the fact that the war veterans have been the main beneficiaries of Zimbabwe’s economic patronage system for decades and that they have – up to now – played a central role in repressing peaceful opposition to Mugabe’s rule, the likelihood is that there are other motivations at play.

At 92 years old, Mugabe is reaching the end of his rule, and despite his vow to run in the 2018 elections and beyond, there has been plenty talk of who will succeed him. First Lady Grace Mugabe has made clear indications that she hopes to be in the running to take over the leadership of ZANU-PF and has the support of certain factions within the party. But the war veterans are much more closely linked to her main rival, Emmerson Mnangagwa (aka The Crocodile).

Mnangagwa, who currently serves as vice-president, arguably has an even longer and stronger relationship with the war veterans than Mugabe. He played a key role in the war for liberation in the 1960s and 1970s. And since independence, he has used his various different ministerial positions overseeing state security, defence and home affairs, to cement his ties with powerful former fighters.

As a result, the war veterans see him as the person who – more than anyone else in ZANU-PF – can cater for their interests in a post-Mugabe era. And they possibly want Mnangagwa to take over as soon as possible in order to start preparing for the 2018 elections. Rather than a sense of solidarity with the popular #ThisFlag protests, figures within the group are more likely to be opportunistically picking this moment of widespread discontentment with the status quo to ratchet up pressure against Mugabe.

[See: Fed up, unafraid, and just getting started: What Zimbabwe’s #ThisFlag must do now]

The clearest indication of this was of course the recent statement, which broke a taboo by directly criticising and confronting the government. Meanwhile, they also endorsed a civil society stay away that the government regarded as illegal.

However, there may be other prongs to the strategy also being carried out in tandem. For instance, war veterans hold many of the most powerful positions within the security sector – such as in the police, army and intelligence – and it is notable that the president has issued warnings on two occasions recently against the security sector interfering in succession politics.

Furthermore, although Mnangagwa cannot speak out against his boss directly, he has directly contradicted the president a few times in the past few months, such as regarding the government’s flagship policies on indigenisation and land policy. He has also publicly called for warmer ties with international financial institutions and Europe at a time Mugabe was turning up his anti-Western rhetoric saying Zimbabwe does not need the “evil West”.

Since the war of liberation, Mugabe has enjoyed a close symbiotic relationship with Mnangagwa and the guerrilla fighters that became the war veterans.

In return for powerful positions and patronage, the war veterans have legitimised Mugabe’s rhetoric and politics, helped crush dissent, and been central in mobilising voters in electoral campaigns. Meanwhile, Mnangagwa has been Mugabe’s ruthless enforcer since 1980 as he has clamped down any potential challengers, overseeing thousands of deaths in the Gukurahundi massacres of the 1980s and scores of deaths in 2008 election violence.

The support of the war veterans and Mnangagwa have thus been indispensable pillars underpinning Mugabe’s system of rule. If the recent statement withdrawing support for him reflects the feelings of the larger group, it would not be an exaggeration to see this as the moment Mugabe’s reign began to disintegrate beyond repair.

Simukai Tinhu is a political analyst based in London and Harare

Senegal: Why did President Sall pardon a ...