Making sense of Boko Haram’s different factions: Who, how and why?

How do Boko Haram’s separate factions differ in term of operations and ideology? 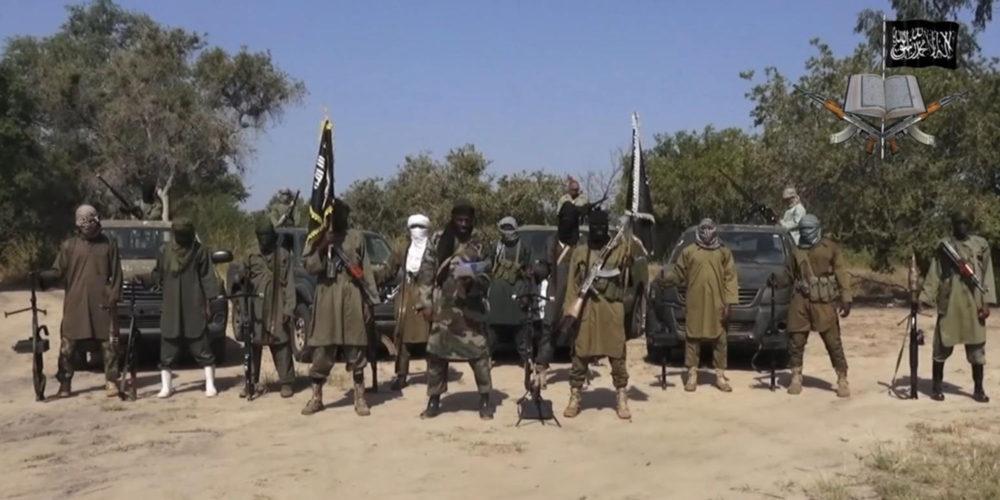 Abubakar Shekau stands at the centre of a Boko Haram video from 2014.

The Islamist militant group Jamaat Ahlis Sunna liDawatti wal Jihad – known as “Boko Haram” – has never been a monolithic organisation. It has always been made up of several factions, and recently these divisions may have become sharper.

The clearest rift is between Abubakar Shekau and Abu Musab al-Barnawi. Shekau became Boko Haram’s leader back at the time of the launch of the insurgency in 2009 and is still its most recognisable figure both within and outside Nigeria. However, on 3 August this year, Islamic State (IS) – to which Boko Haram pledged allegiance in 2015, becoming its “West Africa Province” – announced the insurgency had a new leader in al-Barnawi.

Just hours after this announcement, Shekau issued an audio claiming he was still in charge, but was reverting to his former title as “imam”.  A few days later on 7 August, Shekau then accused al-Barnawi of “manipulating” IS into replacing him. In the video, he also claimed IS leader Abubakar al-Baghdadi had yet to respond to his accusation that al-Barnawi was guilty of “great polytheism” and of not being “authentically salafist”.

Al-Barnawi, who controls the communication between West Africa Province and IS, was likely blocking Shekau’s previous messages to al-Baghdadi. Shekau’s releases were therefore likely his way of circumventing al-Barnawi to speak to both IS and the Nigerian government more directly.

Al-Barnawi and Shekau are thus the two main rival figureheads, but they do not represent the only factions at play. Mamman Nur leads another group that is allied to al-Barnawi but not part of IS. Ansaru, another splinter group, is currently quiet but still active according to Nigerian army reports. Meanwhile, some other cells are reportedly emerging in unexpected parts of Nigeria such as Kogi.

Why have these different factions emerged and how do they differ in terms of operations and ideology?

Al-Barnawi is the son of Muhammad Yusuf, Boko Haram’s founder. Like his father, he is less extreme than Shekau in his interpretation of who it is acceptable to kill. Al-Barnawi argues for the targeting of churches to prevent the “Christianisation” of Muslim lands, as does Shekau. But unlike Shekau, al-Barnawi would leave alone Muslims who do not actively oppose the jihad.

Al-Barnawi also emphasises asymmetric attacks on military targets (as opposed to civilians) and has an operational focus that includes all of the Lack Chad countries of Nigeria, Niger, Chad and Cameroon. He was likely responsible for West Africa Province’s raids on military barracks in Niger starting in May 2016. Al-Barnawi has more fighters than Mamman Nur, including former members of Ansaru and others who have trained in Mali or elsewhere in the Sahel.

In terms of personal style, al-Barnawi has appeared in West Africa Province propaganda, albeit with a veil, and has managed the group’s social media accounts. He is thus media savvy but, unlike Shekau, he is not bombastic and does not expose himself to convey his messages.

Al-Barnawi is similar to Nur in terms of beliefs, and both are closer to al-Qaeda in ideology than IS. The apparent contradiction of him being part of IS can be explained by his vision, shared by his father, of an Islamic State in West Africa. This ambition cannot be reached under al-Qaeda’s “gradual” and “emirate-based” approach, but can under IS. Like other marginal al-Qaeda factions and allies in northwest Africa that switched to IS around 2014-15, al-Barnawi seems to have prioritised IS’s “immediate caliphate”.

However, at the same time, al-Barnawi may have a latent attachment to al-Qaeda. He probably appreciates that al-Qaeda in the Islamic Maghreb (AQIM) harboured and trained his father’s supporters after his father’s death in 2009 and that AQIM’s leader praised his father’s “martyrdom”. AQIM’s efforts in Nigeria were also later extended into Nigeria via the splinter group Ansaru, which carried out AQIM-like kidnappings of foreigners in Nigeria and Cameroon and served as an ideological counter to Shekau’s targeting of Nigerian Muslims.

On this front, it is notable that al-Barnawi did not allow West Africa Province to engage in anti-al-Qaeda propaganda while in charge of its communications, unlike other IS provinces. It is therefore possible he will rejoin al-Qaeda if the IS caliphate is decimated in Syria, Iraq and Libya, and al-Qaeda’s model proves successful in places such as Syria (with the rebranded Jabhat al-Nusra) and Afghanistan (with the Taliban).

An alternate possibility is that al-Qaeda is already in communication with al-Barnawi and covertly coordinating his efforts to depose Shekau and divide and weaken West Africa Province to facilitate an eventual realignment with al-Qaeda.

As a leader, Shekau has adopted a territorial-based approach to the insurgency, with a focus on Borno and neighbouring states in north-east Nigeria. He has more fighters than either al-Barnawi or Nur, especially from the Kanuri ethnic group around Lake Chad, who almost exclusively form his inner circle.

Despite leaving IS organisationally and returning to his original pre-IS leadership position as “imam”, Shekau has retained his pledge to al-Baghdadi. He may believe that IS did not abandon him so much as al-Barnawi “manipulated” IS leadership  into replacing him.

At the same time, the Nigerian army claims once again that Shekau is dead, which, if true, would mean that his fighters are up for grabs either to the new leadership or to competing IS and al-Qaeda-aligned elements in Nigeria. Boko Haram however issued a video on 15 September saying Shekau is still their “imam”, countering the army’s claim.

Shekau is ideologically similar to IS, so their relationship appears natural. He may therefore be hoping that by reaching out to al-Baghdadi in recent Boko Haram Youtube videos, IS will reconsider its decision to drop him. However, at the moment, IS is likely too preoccupied evacuating fighters from Sirte, Libya, to focus on dealing with Shekau.

It is also notable that IS leaders such as Abu Muhammed al-Adnani, who accepted Shekau’s pledge in 2015, and North African IS media members who wrote of their passion for Shekau are now dead. Shekau may therefore have few supporters in IS ranks to argue for his reinstatement over al-Barnawi.

While Shekau may feel the need to reach out to al-Qaeda to acquire resources (or to negotiate for the Chibok schoolgirls and release new ransom videos of them), AQIM is likely more interested in al-Barnawi (or Nur) than Shekau. Shekau is therefore most likely to remain independent in the near future, which could mean that there will be no limits to a more indiscriminate killing campaign. This could garner Shekau greater attention as compensation for on-the-ground losses and resource deficiencies.

Nur does not belong to a defined group, but is able to being together operatives from diverse factions for big operations as exemplified by the UN attack in 2011, which involved elements of Boko Haram, Ansaru, AQIM, and fighters returning from al-Shabaab in Somalia.

As Nigerian and Senegalese fighters who were in Sirte – the Libyan city IS recently lost control of – now move south into Niger and other parts of the Sahel, Nur seems most qualified to manage their assimilation.

Nur prefers large-scale attacks on international targets, including churches. He was likely responsible for the introduction of suicide bombings en masse into Nigeria’s Middle Belt region in 2012 and 2013, although as he seems indifferent to propaganda, letting Shekau claim many of those attacks.

Despite Nur’s reclusiveness, he surfaced in a private audio that was recorded before the Shekau/al-Barnawi leadership feud became public, but was leaked after 3 August. In the recording, he accuses Shekau of hoarding weapons for his own faction, killing fighters from other factions, and carrying out sharia punishments on civilians for minor infractions and without evidence.

As a former loyal colleague of al-Barnawi’s late father, Nur may serve as a mentor figure to al-Barnawi. And even though Nur is now loyal to IS, his history is also closely associated with al-Qaeda. If Nur realigns with al-Qaeda, he could try to integrate IS foreign fighters, especially those from Libya, into AQIM and create a more diversified regional threat than AQIM’s previous Mali-concentrated insurgency. This would extend AQIM’s capabilities even beyond the terrorist attacks in Bamako, Ougadougou and Abidjan since 2015. Nonetheless, pro-IS militants on the Mali-Burkina Faso border are also competing for these fighters.

In this context, it is also important to consider the role of Ansaru, which appears to be sending fighters to Libya. In both February and August 2016, the Nigerian army reported the arrests of Ansaru members involved in this movement.

Moreover, given Ansaru’s connection to Kogi State, where it carried out an ambush on Mali-bound Nigerian troops in 2012 and where Ansaru commander Khalid al-Barnawi was arrested in April 2016, Nur could have a role to play in the development of the radical cells emerging in that part of Nigeria.

These cells could be the next generation of militancy in Nigeria and play a role in bringing the insurgency southwards to the Middle Belt once again. Thus, Nur’s future affiliation – whether with al-Qaeda or IS – will likely have a significant impact on the affiliations, ideology, and tactics of the insurgency in the years to come.

Jacob Zenn is a Fellow of African and Eurasian Affairs at The Jamestown Foundation, and frequently works on issues related to the insurgency in Nigeria.