Within hours of Gordhan’s removal, the controversial $70 billion deal was back on the table. 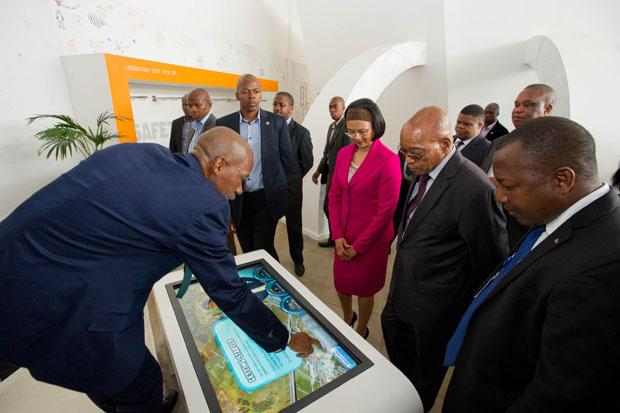 Widespread protests calling for the resignation of President Jacob Zuma continue apace in South Africa in the wake of last month’s removal of Finance Minister Pravin Gordhan. In a midnight reshuffle on 30 March – dubbed the “night of the long knives” – Zuma stealthily and controversially replaced Gordhan along with his deputy and seven other cabinet ministers.

Zuma’s purported justification for the reshuffle was to better pursue “radical economic transformation”, which he says he will be the focus for the rest of his term. For supporters, this means ending “white monopoly capital” and South Africa’s subservience to the whims of banks, international investors and rating agencies. For opponents, it is a smokescreen for undermining democratic institutions to enable “state capture” and personal enrichment for Zuma and his allies, including the powerful Gupta family.

In response to the reshuffle, two ratings agencies downgraded South Africa’s credit rating to junk status, while thousands have taken to the streets calling on Zuma to step down.

The effects of the controversial reshuffle will be wide-ranging and long-lasting, but one particular issue around which these struggles will converge in the coming months is a huge and contentious nuclear power deal.

This proposed scheme has generated much controversy over the past few years, but its progress was held up by Gordhan and others in government who opposed it. These critics have now been purged, however, and plans for the titanic deal have gathered fresh momentum.

According to the government, South Africa will have to turn to nuclear to generate an additional 9,600 megawatts of capacity and ease the country’s reliance on ageing coal-fired plants. The nuclear deal it has proposed to fill this gap is set to be the most expensive tender in South African history and will last for at least 60 years. Although credible government estimates have not yet been provided, it is suggested the project could cost 1 trillion rand (approximately $70 billion).

The government’s support for nuclear comes despite the findings of the Energy Department’s draft 2016 Integrated Resource Plan (IRP), which was itself criticised for lacking independence, transparency and adequate consultation. The report maintains that South Africa’s energy needs will not need to come from nuclear until at least 2037, ten years later the proposed timeframe. It instead encourages the use of clean and/or renewable sources that South Africa has a comparative advantage in, such as gas, solar and wind.

But these recommendations have not stopped Zuma from pursing a nuclear agreement, largely out of the reach of public scrutiny. According to inside sources, contracts have already been drawn up between South Africa and Russia, personally brokered by the president as early as 2012 during a visit to Moscow.

These alleged agreements, made behind closed doors, would reportedly allow for Russian involvement across the entire value-chain of the project. And Russia would apparently have limited accountability in the event of any serious incident. In response to these claims, the South African government has remained coy, referring to a “strategic partnership” between the two countries but offering few details.

Furthermore, in October 2016 Zuma announced that any nuclear deal would no longer be funded by the Department of Energy but by the already heavily-indebted state-owned power utility Eskom. This move was widely perceived to be a strategy to further circumvent parliamentary oversight, intensifying fears over the deal’s lack of transparency and raising suspicions that the programme would bring with it lucrative kickbacks.

While he was at the helm of the treasury, Gordhan could effectively veto the nuclear proposal from progressing. But that all changed following the night of the long knives.

“This reshuffle seems to position pro-nuclear supporters in key decision-making positions within government and seems to lay a strong foundation which is aimed at pushing through nuclear, no matter the cost to the people,” says human and environmental rights activist Kumi Naidoo.

Indeed, in the reshuffle, Gordhan was replaced with the more compliant Malusi Gigaba, while Mmamoloko “Nkhensani” Kubayi, widely seen as a Zuma stooge, became the new Energy Minister.

At the same time, Matshela Koko, a nuclear energy proponent, is acting CEO of Eskom. And his pro-nuclear predecessor, Brian Molefe – who is alleged to have awarded the Gupta family lucrative coal contracts – is now an MP for the ruling African National Congress (ANC).

On taking up his new appointment as Finance Minister last month, it took Gigaba just a few hours to confirm that the multi-billion-dollar nuclear deal was on, saying: “It is not a figment of imagination…it was adopted by cabinet as a programme to implement as we diversify our energy mix and bring on board environment friendly energy generation.”

Confidential documents revealed by the press on 9 April reported that the formal tender process conducted by Eskom is to commence in June.

Is time running out?

Should the nuclear deal go ahead, it would not only be South Africa’s largest tender to date, but also possibly the largest exercise of state capture ever. Stopping the deal will provide a key test for South Africa’s democratic institutions and political culture.

Pressure could come from an increasingly divided ANC as well as a legal challenge against the bill, spearheaded by the NGOs Earthlife Africa and the Southern African Faith Communities’ Environment Institute (SAFCEI). Moreover, Eskom may struggle to raise finance for such a project, despite political will, having suffered another credit rating downgrade after the reshuffle. It now lies well into junk territory, four notches below investment-grade status.

Street protests against Zuma also continue, while he is set to face a no-confidence vote, though this has been delayed as the judiciary decides whether a secret ballot is necessary. Having survived seven votes of no confidence since coming to power, not to mention 783 charges of corruption, it would take significant defections within the ANC to oust the embattled president, who has to date lived up to his ‘Teflon’ nickname.

More important perhaps will be the leadership battle within the ruling ANC that will take shape at the party conference in December. This race is far from over at this point, but Nkosazana Dlamini-Zuma, the president’s ex-wife and favoured candidate, is looking like an increasingly likely successor. She is presumed to be willing to protect Zuma, which in turn will enable him to manage his succession and provide continuity.

Nevertheless, some observers suggest that Zuma and his allies are aware that their dominance over the direction of government may be in danger of coming to an end. It is this, they say, that has led them to accelerate their plans such as the nuclear deal.

According to a journalist who has investigated multiple reports of corruption within South African parastatals, Zuma loyalists are “increasingly determined to capture the state” but “time may be running out for the patronage faction within the ANC”. The journalist, who spoke on condition of anonymity, believes the group’s success in pushing the nuclear deal “will depend on whether they manage to capture the Treasury quickly enough, purging those officials and bureaucrats committed to Gordhan’s cause”. Taking control of state institutions in such a way would certainly not be unprecedented.

Whether those loyalists are successful on this front – and whether those who oppose the deal will be able to mobilise in opposition – will become apparent in the following weeks and months. One thing that has already become clear by recent events, however, is that even the boldest conspiracy theories in South Africa can be proven to be true, underscoring the degree to which the state has already been captured.