In Nigeria, Okoye would have been warned from childhood to soften her features so she can find a man to marry her. 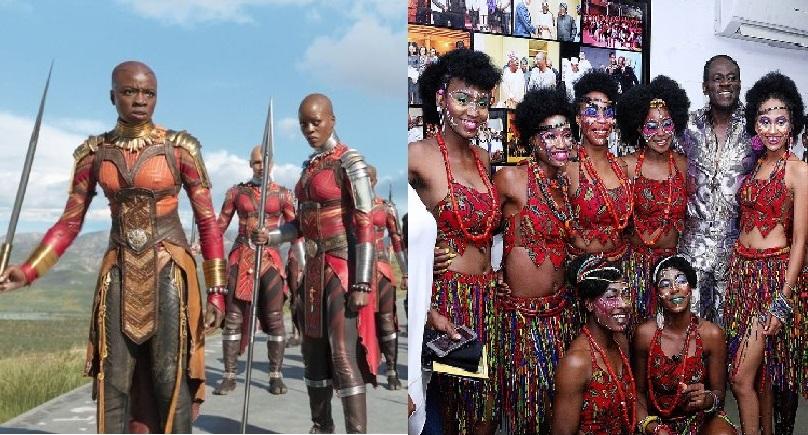 Black Panther (left). The cast of ‘Fela Kuti and the Kalakuta Queens’ (right).

Marvel’s Black Panther is a rare blockbuster to have achieved both box office domination and genuine cultural significance. One of the reasons for this is the film’s unlikely but welcomed focus on feminism. Set in the fictional Afrofuturistic nation of Wakanda, Black Panther boasts a dazzling array of fabulous female characters fully in possession of their power and unapologetic about wielding it.

In Lagos, Nigeria, where the film is a huge hit, many have been touting the badassery of the women of Wakanda. Okoye, the fierce army leader embodied by Danai Gurira is a particular favourite. So is scene-stealer Letitia Wright as Shuri, the princess who doesn’t let royalty stop her realising her full potential as the technological saviour of Wakanda.

This almost unanimous show of support for Black Panther’s forward-thinking depiction of women, however, does not erase the fact that much of Nigeria still holds onto archaic patriarchal ideologies. Wakanda’s gender parity is notable for just how far away it is from the sad reality.

In much of Nigeria, Okoye would have been warned from childhood to soften her features so she can find a man to marry her. Shuri would have been discouraged from spending too much time at the laboratory for the same reasons. And as for Nakia, everyone would ask: what kind of girl chooses a high-flying career over the chance to become queen?

Women who go against scripted societal norms are frowned upon, treated as outcasts, and erased from history. In 1929, for example, thousands of women in eastern Nigeria rallied together and confronted their British colonial rulers. The movement was on a scale the colonial state had never previously witnessed and led to significant changes. However, the heroic women who led the Aba Women’s Revolt – people such as Nwanyeruwa and Ikonnia – are largely left out of mainstream history books.

Fela and the women

Also left out of the narrative until recently have been the many women that formed a crucial part of Fela Kuti’s legendary career. The Afrobeat pioneer and political activist may be Nigeria’s most famous son. He has been immortalised in the Tony Award-winning Fela! The Musical and in the 2014 documentary Finding Fela. His legacy and music have been debated endlessly in conference rooms, music festivals and bars all over the world.

However, in all this, little interest has been devoted to Fela’s women – the merry band of singers, dancers, and supporters who thronged to his “Kalakuta Republic” sanctuary, who defied societal scorn and parental pressure, who loved him and inspired his sound.

There is no Fela without the women. They cannot just be heard on countless recordings joyously chanting “open and close”. They were an intrinsic and extricable part of the artistic legacy associated with Fela. Their striking fashion statements, creative use of beads, headgear, body art and Ankara prints remain indelible in today’s culture. Their graphic representations are rendered in music videos by pop stars from Wizkid to Niniola and in glossy magazine photo spreads.

But despite this rich legacy and gorgeous imagery, the stories and lives of Fela’s women have rarely been explored.

It is this imbalance that the splashy stage musical Fela and the Kalakuta Queens seeks to redress. Premiering in Lagos last December, the three-hour production follows Fela, the women that surrounded him, and the dynamics that influenced their relationship.

“I wondered why no one was talking about these women who were a significant part of Fela’s life and I wanted to know more about them,” director Bolanle Austen Peters remarked at one of the sold out showings.

The musical is commendable in shining a light on these female artists, pioneers and musicians. We learn some of the names of Fela’s “queens”, such as Funmilayo and Laide. However, in creating a crowd-pleasing fairy tale of female loyalty and companionship, the production, backed by Fela’s estate, fails to address the singer’s noted misogyny and violence towards women.

We gain little insight into why so many remained devoted to the cause, what made them tick, and what their own dreams and aspirations were. Most problematically, the play’s climactic scene – which depicts Fela’s highly controversial wedding to 27 women in a single ceremony – is played as an act of redemption set to the swirling instrumentation of Ololufe, a rare Fela love song.

Lady no be master

This form of female under-representation, even in a piece of art aiming to celebrate women, is not uncommon. This is the case around the world and certainly in Nigeria. Culture reflects society, which is in part shaped by politics and vested interests.

In Nigeria, for example, a gender equality bill which seeks to prohibit all forms of gender-based discrimination is waiting in the Senate. It has been stalled since 2016 due to opposition by religious and traditional groups. The Ministry of Women Affairs and Social Development has a national strategy to end child marriage, but according to UNICEF, 12 out of Nigeria’s 36 states are yet to enact the child rights act adopted at the national level in 2003.

In Lagos, the city that was both home and hell for the singer, Fela’s music blares out of speakers at night clubs, at parties, and on the radio. One of the songs one hears frequently is the classic Lady in which Fela castigates African women for daring to fancy themselves equal to men. “She want sit down for table before anybody, she want a piece of meat before anybody”, he complains scathingly.

That song was released in 1972, but for all the progress Nigeria has made on gender equality over the past half a century, Lady could have been released last week. Wakanda’s gender relations in Black Panther seem so far off, they could be from a thousand years in the future. Less than 6% of Nigeria’s lawmakers are women, the lowest proportion in Africa. Women own just 20% of enterprises in the formal sector. A third of women have experienced physical abuse.

One hopes that the women of Wakanda can inspire Nigeria’s women and girls, along with their male allies, to see things differently and transform gender relations in the country. But for now, it is sadly apparent that a girl born in the North is more likely to be married off at childhood than lead an army like Okoye, devote her life to study like Shuri, or unabashedly pursue her own calling like Nakia.

Black Panther may provide an aspirational blueprint, but for now, Fela won’t be worried. Nigeria is still a long way off before “Lady na master”.