African Arguments is creating a new, weekly newsletter, bringing you concise analysis of the week’s most important developments. It will highlight underreported issues and angles, and put the news in context with a special emphasis on constructive solutions and future directions. Our team of experienced journalists and researchers will examine the major stories coming from Africa and find the best articles from around the web so you don’t have to.

After two free editions (the first one below), this original and high-quality “insiders” newsletter will come at a small fee. This money will go towards supporting African Arguments’ core mission of commissioning predominantly African journalists and commentators to provide freely-accessible content.

You can get a monthly subscription to the newsletter for $10 or sign up for the whole year for $100. You can also choose to pay a special supporter’s fee of $15 and $150 respectively to provide additional support to help keep African Arguments going.

As a special thanks to our early subscribers, we are offering 15% off your first payment. RAS members get a 30% discount; email [email protected] with your name and you’ll be sent a voucher code.

Here’s edition #1 of the Insiders’ Newsletter. Don’t forget to forward it to your colleagues and friends, and please give us feedback by commenting below.

US Secretary of State Rex Tillerson was dispatched to Africa – his first trip to the continent during his 14-month tenure – in part to shore up support for the United States. But instead, his trip might have served only to reinforce the Trump administration’s lack of interest in the continent. The US president reportedly fired Tillerson just two days into what was meant to be a six-day visit. The former secretary ended up cutting his trip short and was officially fired upon his return.

Amongst other things, Tillerson’s sacking undercuts one of his key messages: that African leaders should push back against China’s encroachment. In a speech before departing for Africa, Tillerson claimed to lay out a “new framework” for US-Africa relations. In fact, he only promised the continuation of several existing programmes and expressed hope that African countries would align more closely with the US on foreign policy and economic issues but without offering any clear incentives to do so. While Tillerson highlighted security cooperation, America needs the buy-in of African leaders at least as much as they need US soldiers and intelligence.

Even before news leaked that Tillerson had been fired at the journey’s outset, it was not clear the trip had been a success. The top US diplomat had only visited key allies, but even that did not shield him from some uncomfortable moments.

At a press conference in Chad, for example, Foreign Minister Mahamat Zene Cherif said that Trump’s outburst – in which he reportedly referred to African countries as “shithole nations” – had “shocked almost all Africans.” However, for the most most part, the leaders Tillerson met with emphasised a willingness to overlook – if not forget – the incident and move forwards.

It’s not clear the US will share that sentiment, especially if CIA Director Mike Pompeo, whom Trump has tapped, takes over as Secretary of State.

While Tillerson had not been a particular champion for Africa, he voiced support for programmes such as the President’s Emergency Plan for AIDS Relief. The Trump administration has proposed cuts to this as well as other aid efforts. On the day Tillerson was fired, Trump said he was looking for a replacement whose views aligned more closely with his own.

Meanwhile, African leaders are left to figure out what to make of the latest slight by the Trump administration. Instead of amends, they got to share the last days of a lame duck.

The persistent crisis of the Central African Republic

With about 2,000 deaths, the last 12 months have seen CAR slide into depths of political violence last seen during the 2012-2013 civil war. That conflict served as the backdrop for the ethnic cleansing and large-scale violence that took place in 2014.

While elections in 2016 finally restored a constitutional government under President Faustin Touadera, the government never managed to expand its control beyond parts of the capital. The UN peacekeeping mission, MINUSCA, which currently has 12,700 military personnel, has proven to be incapable of keeping the various armed groups in check, especially after France withdrew its own intervention force in 2016.

With the complete disintegration of the state, the conflict has also fragmented. It is now as much centered around armed communities as it is a confrontation between distinct political/military entities. No serious effort has been made on the part of the government or international community to recognise this complex reality. This has contributed to the failure of disarmament, demobilisation and reintegration.

Equally unaddressed is the issue of tensions between Muslim and Christian communities, which has its roots in pre-colonial times as much as in more recent contests. The government is continuing to label rebels and militias from the predominantly Muslim north as “foreign fighters,” questioning the political legitimacy and citizenship of parts of the population. All this comes at a time of decreasing international engagement.

Amidst increasing regional instability, political violence in CAR will only worsen if allowed to continue. Government efforts to signal to Muslim communities that they are part of Central African society and that the government is willing to invest in long-neglected parts of the country would begin to address some root cause of tensions. At the same time, mostly Christian communities in the west would have to be reassured of their security.

To counter the influence of armed groups, both the government and international forces should also address the conflict economy, which expresses itself most clearly in the form of dozens of checkpoints on every major road. The factions of the former Seleka rebels alone generate about $7.4 million in annual revenue from these. Regional and international actors must speak with one voice and develop a coherent agenda underpinned by a strong and lasting presence.

Let’s start with the wonderful: “I really put everything into writing. So for this to happen is unbelievable.”

This is the reaction of Ugandan writer Jennifer Nansubuga Makumbi to winning Yale University’s Windham Campbell Prize, mainly for her debut novel Kintu. The novel was first published in Kenya, after a British publisher rejected it for being “too African”.

The news hit the wires on International Women’s Day and was widely celebrated. But it is also part of a larger trend of African women stepping into the international limelight. This includes several feminists writers. Nigeria’s Chimamanda Ngozi Adichie’s TED talk, “We should all be feminists,” is maybe the prime example, but she is only the tip of the iceberg. This may be because, as Ghana’s Theo Sowa argues, “African feminism has always been more fun than other types of feminism or other types of social change”. This is, she says, because of the unique perspective it offers from the intersection of gender with race, class, and social and economic injustice.

But IWD offers of course other, less positive reasons to focus on Africa. According to the stats, African women are disproportionately impacted by conflict, poverty, discrimination and practices such as FGM, child marriage and domestic abuse.

There are reasons to be hopeful, however. African countries have not only given the world some of the most influential voices in shaping the global discourse around gender relations, reaching back to Mali’s late Jacqueline Ki-zerbo, but are actively pioneering experiments to change the state of affairs going forwards. Four countries on the continent feature national parliaments made up of more than 40% women, more than in any other part of the world. 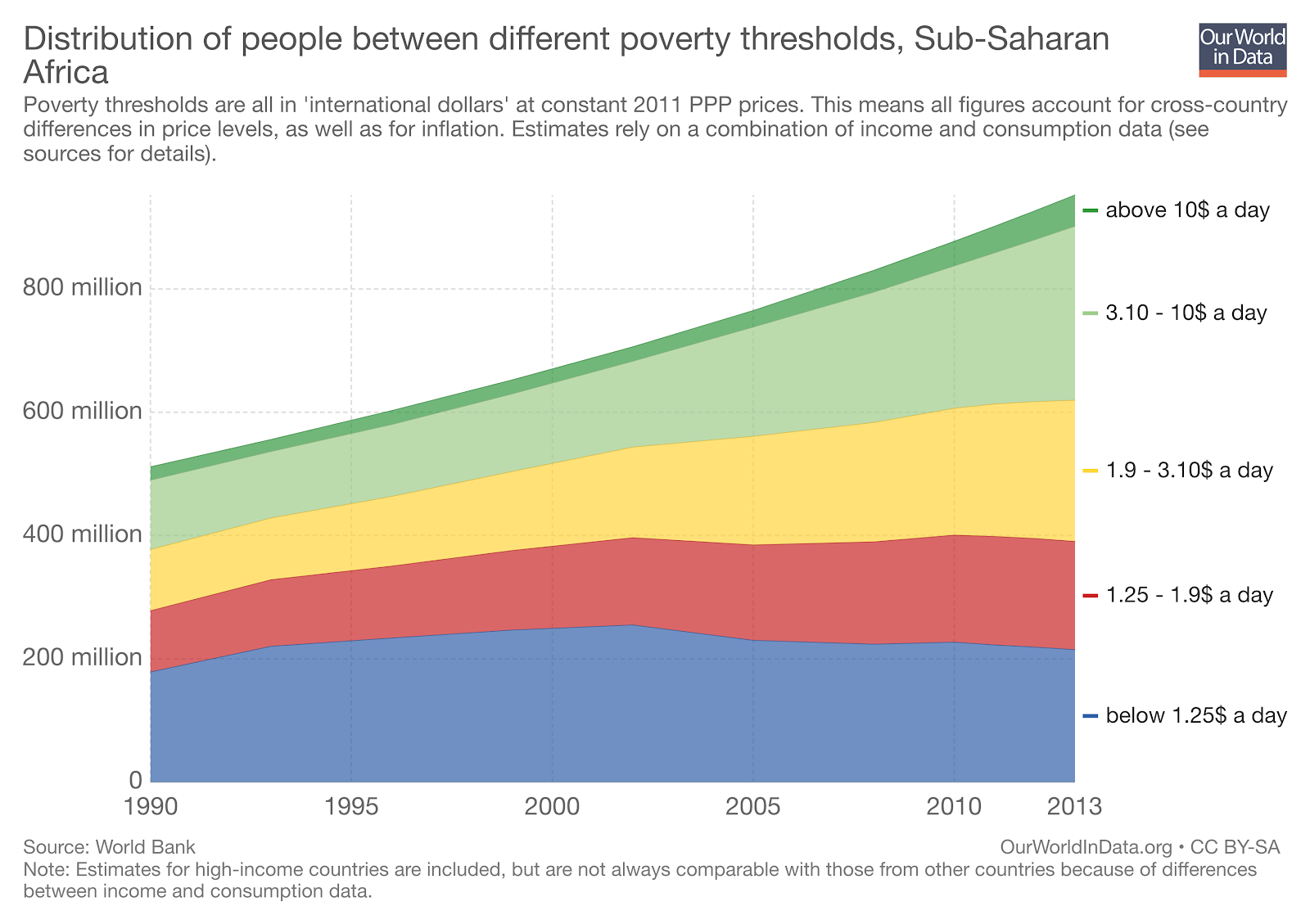 Source: Our World in Data

In proportional terms, the picture looks a bit better, with the share of the African population earning less than $3.10 decreasing steadily since about 2002: 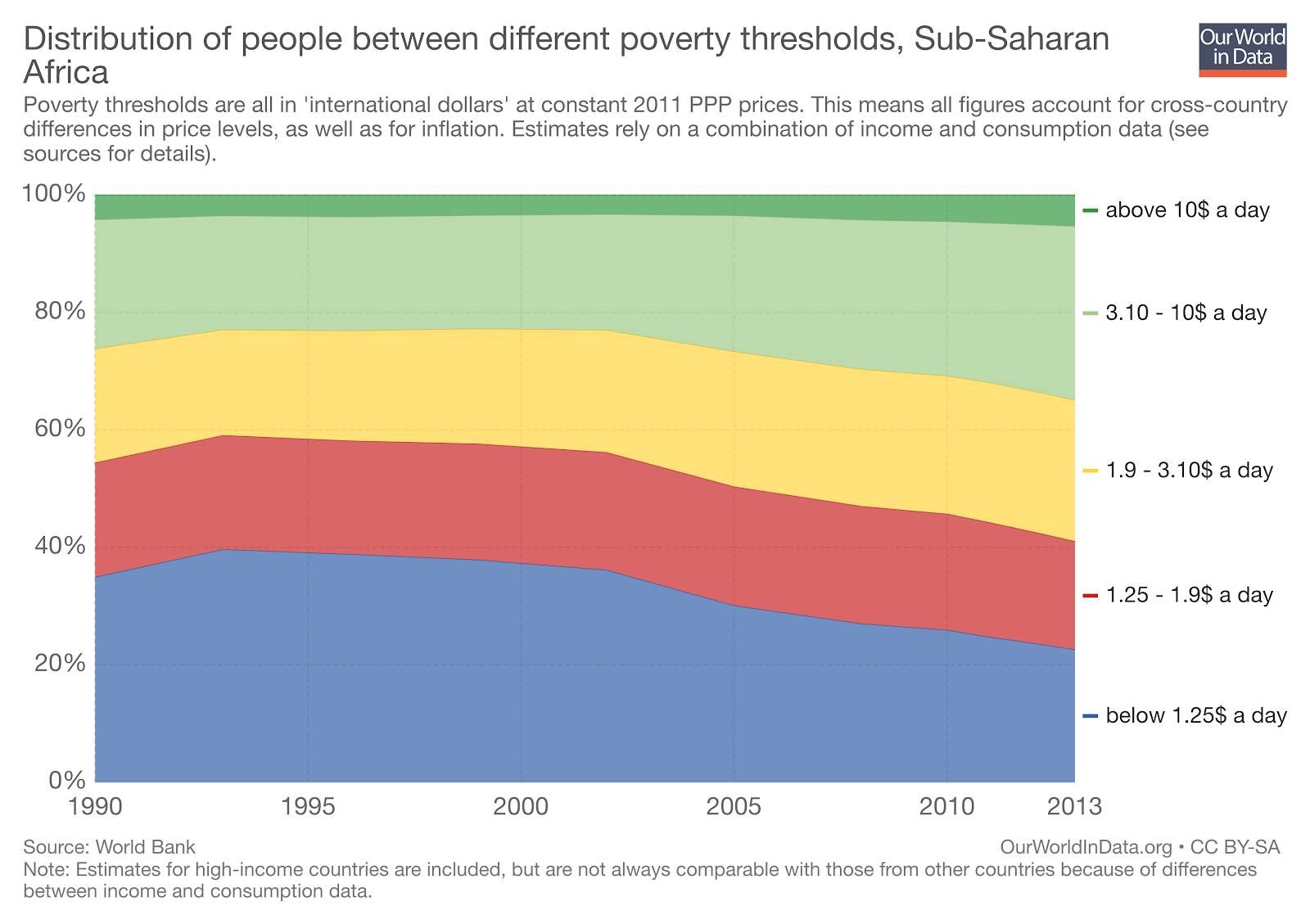 And some countries made much more progress than others. Botswana now has almost 30% of its population living on more than $10 a day, after steadily improving poverty rates since at least 1981, a development that is similar to China.

For some more analysis, look at this blog entry on Our World in Data (and follow them at @OurWorldInData).

President Museveni of Uganda says 'Africa is so rich, then how does this poverty come about? It is because of sleep.'
In Africa there is a lot of oversleeping, the @DailyMonitor quotes him as saying pic.twitter.com/PFzRKXAjBc

The obvious irony aside that there are quite a few photos of Museveni himself taking a nap during work hours, these statements obviously brush over his own responsibility for the moribund economic development in Uganda despite ruling since 1986.

On a more serious note, South Africans (the only country for which we found comparable data) actually sleep almost one hour more than the average OECD citizen. But the factual basis for Museveni’s assertion doesn’t get much more support. Chinese people, after all the great role models for many African governments, only sleep slightly less than South Africans and overall there is little correlation between sleep time and economic development. President Museveni will have to look for another culprit to take responsibility for his own failings.

6. What else you should be reading: