Ethiopia: A nation in need of a new story 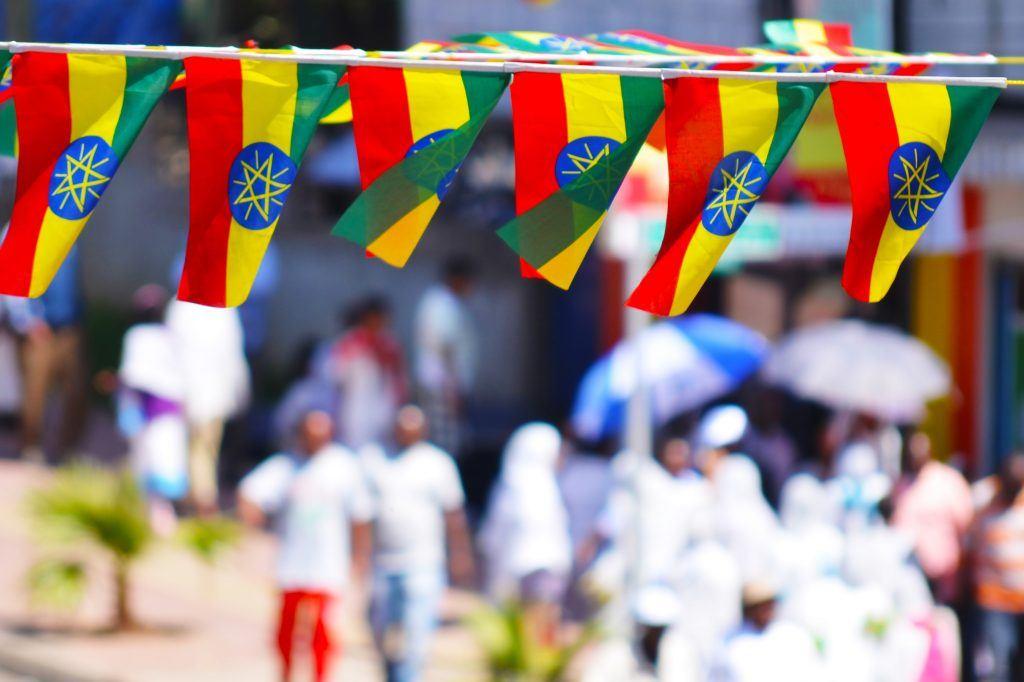 Ethiopian flags at a celebration in Addis Ababa.

At the end of Zagwe dynasty around the 14th century, medieval Ethiopia was in disarray. Provincial warlords were battling for supremacy and the nation was on the brink of disintegrating. Ethiopia was at threat of breaking itself apart through internal fighting as its standing in the world diminished.

It was at this fraught moment in time that the Kibre Negest emerged. Meaning “The Glory of the Kings” and written by an anonymous author or authors, this huge text reconstructed the biblical tale of how Queen Sheba visited King Solomon in ancient Israel. The book claimed that the two conceived a child, Menelik, who went on to bring the Ark of the Covenant to Ethiopia and became the nation’s first Solomonic king.

By establishing the divine origins of Ethiopia’s royal line, the Kibre Negest sought to disarm the warlords at home, while portraying the empire as unified and proud to the outside world. However, ordinary citizens soon found surplus meaning in it. Over the years, ideas of Ethiopia’s unifying and mythic origins contained in the ancient text evolved into a popular notion of Ethiopiawinet or “Ethiopianness”.

Still to this day, intellectuals debate whether or not Ethiopianness exists. Some claim that ethnicity is the overriding identity that cuts through and across the national. Others argue that the concept is the outdated invention of a Christian empire that has little relevance today.

However, for many ordinary citizens, the idea of Ethiopiawinet transcends historical debates. It not only exists, but is a matter of survival, common belonging and celebration. Religiously, it emphasises the unity of humanity by weaving together Islamic and Christian teachings. Ethically, it offers moral guidance by critiquing the imperfections of earthly life. Politically, it urges negotiation and the striking of a balance between what is good to me and what is good to my ethnic and religious neighbour.

For many Ethiopians, Ethiopiawinet also manifests as that electrifying and inescapable feeling when watching Abebe Bikila, Haile Gebrselassie, Deratu Tulu, Mesert Defar or Tirunesh Dibaba glide past their international competitors to win gold.

For centuries then, the kind of myth-making found in the Kibre Negest has been central to the formation and fate of Ethiopia. This is as true now as it has ever been. When the Ethiopian People’s Revolutionary Democratic Front (EPRDF) came to power in 1991, for example, its leader Meles Zenawi drew on his deep talents as a storyteller.

His story came from a dark place, coloured by the painful past of the Tigrayan people and of himself. Its genesis went all the way back to the 18th and 19th centuries when Tigrayan and Amhara rulers tussled for power. This struggle continued up to 1889, when last Tigrayan king, Yohannes IV, died in battle. With his dying breath, he declared his natural son to be his heir, but Menelik II proclaimed himself the rightful Emperor. Once on the throne, the Amhara leader used a combination of force, religion and the Amharic language to expand his kingdom. While there may have been well-intentioned reasons behind his campaign, it involved various atrocities and undermined the culture and identity of less powerful ethnic groups.

This Ethiopian Empire continued until 1974 when the communist Derg took power. This new regime maintained a unifying narrative, but its rule was largely experienced as the repression of anyone who questioned it. The people of Tigray, fighting for self-determination, were among its many victims.

The EPRDF thus came to power after centuries of what Meles saw as the subjugation of minorities. He believed the singular narrative of Ethiopia was inherently oppressive and established a federalised system based on the diversity of the country’s ethnicities. The ruling coalition, made up of representatives from different groups, told a new story. This hopeful tale emphasised the discreteness and uniqueness of Ethiopia’s many peoples, but had at its core an implicit sense of mutual fear and suspicion.

Over the years, these anxieties grew. Notions of ethnic nationalism hardened along with feelings of systemic discrimination. Meles’ story might have aimed to restore “the dignity of difference”, but it weakened the unifying legend that had helped Ethiopians transcend their ethnic and religious divides.

Things worsened under Prime Minister Hailemariam Desalegne, who came to power in 2012. He had no story of his own and simply tried to re-tell that of his more eloquent predecessor. He resigned earlier this month after years of sustained and widespread protests, particularly amongst the Oromo and Amhara frustrated by feelings of marginalisation.

Ethiopia’s new prime minister, Dr Abiy Ahmed, has thus inherited a country in crisis. He faces a wide range of complex challenges in trying to reform the political system, economy, military and much more. He will have to lead tough negotiations and come with myriad smart and sensitive policies to steer this country of 100 million people back on track. However, in all this, he should not forget the importance of storytelling.

In my previous piece here on African Arguments, I pointed out that Abiy has gained popularity across ethnic groups because of his inclusive rhetoric. His many allusions to Ethiopiawinet in his inaugural speech hit a chord with many. But in fact, it goes beyond that.

Due to his own background, Abiy personifies both the existential dangers and reasons for hope in the country’s future. His biography encompasses the marvellous messiness of Ethiopian society. He hails from an Oromo father and Amhara mother. He shares Islamic and Christian upbringings. He is fluent in several languages. His personal story is Ethiopia’s story.

Moreover, Abiy has the ability to spin this rich heritage into a tale that oozes positivity. His story-telling style eschews the usual aloofness of politicians and speaks directly to the people’s aspirations. The new PM has already been utilising these skills in his tour of the country, focusing on regions that may be apprehensive about his rapid rise. In Ethiopia’s Somali State, he proclaimed: “There is neither centre nor periphery to the Ethiopian identity. Together we form the nucleus of our national story”. In Oromiya, from which he hails, he took pains to tie the protests and his own identity to the broader nation, emphasising: “The Oromo struggle is the Ethiopian struggle”. Meanwhile, in Tigray, the home of Meles, he contended: “Ethnic differences should be recognised and respected. However, we should not allow them to be hardened to the extent of destroying our common national story”.

At other times, Dr Abiy’s speeches have been full of forward-looking imagery. He uses the concept of medemer, a word that means “being added to” but stresses the beauty of blending, to talk about Ethiopia. He describes the eagle that soars above the stormy clouds to encourage audiences to look beyond today’s messiness to a brighter future. And he explains that the Ethiopian people have not inherited the nation from their parents but are borrowing it from their children. “When you inherit something, you can change or sell it. When you borrow something, you have to handle it with care because you have to return it”.

At this difficult moment in its history, Ethiopia desperately needs some wide-ranging and concrete reforms. But as relations fray and tensions simmer, the country also needs a soothing story.