Burkina FasoSociety
Home›African Arguments›Country›West›Burkina Faso›How Burkina Faso took to the streets to remove a dictator, then stayed there

How Burkina Faso took to the streets to remove a dictator, then stayed there 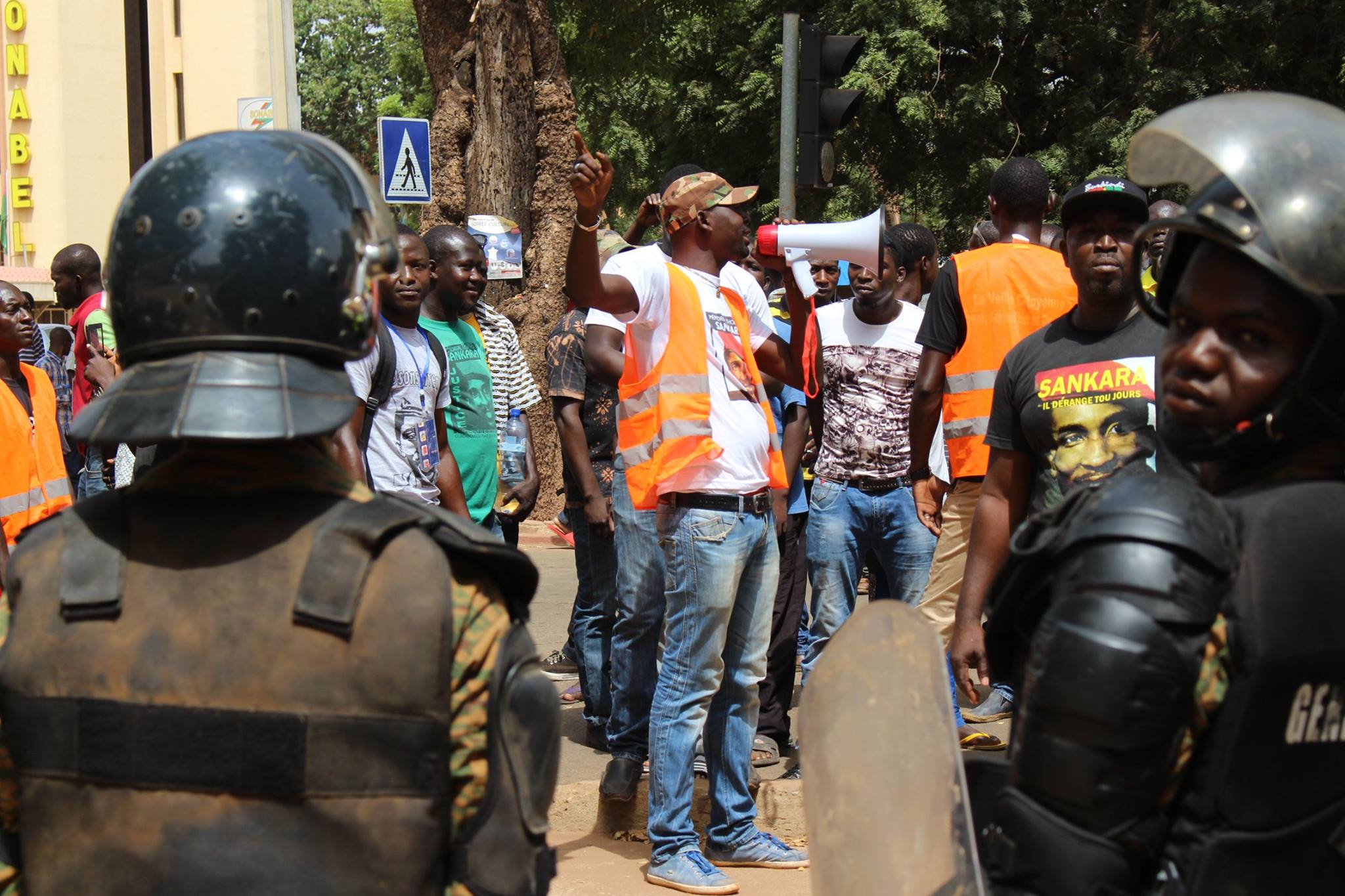 Early this month, Burkina Faso’s capital Ouagadougou was briefly enlivened as a frustrated coalition of housing and human rights associations took to the streets. Demonstrating against what they see as the government’s “complicit silence” over “land grabbing” by real estate companies and agribusinesses, the protesters expressed their anger loudly and clearly.

In the last couple of years, such scenes have become commonplace in Burkina Faso. In urban centres and around the country, people have mobilised against fraudulent land deals, high health costs, poor roads, the displacement of villagers, corruption, lack of transparency in government and much more. According to one official tally, public employees alone have engaged in over 80 strikes, sit-ins and other protests since Roch Marc Christian Kaboré came to power in December 2015.

The president, along with many other officials, has lamented the persistent unruliness that has become part of Burkina Faso’s political culture. In a national address in December 2017, for instance, Kaboré complained that “some of our compatriots want everything, right away”. He urged Burkinabè to protest less and called on them to work hard, obey the law, and practice what he called “responsible citizenship”.

Others, such as parliamentary speaker Alassane Bala Sakandé, have been more scolding. Giving a speech just a week after the president, Sakandé was talking about terrorism before he immediately turned to the “no less pernicious” danger of “generalised incivility”. He objected that in Burkina Faso today, “strikes and other protest movements succeed each other at an exceptional pace”.

Various officials, and some Burkinabè, see frequent and widespread protests as disruptive and as an affront to people’s duties as citizens. But many others see the act of demonstrating and demanding rights as forming the very essence of an “insurgent citizenship”.

This was not always the case in Burkina Faso. During direct French rule over what was then Upper Volta, most residents were relegated to subject status. Only French nationals and a handful of culturally-assimilated Africans enjoyed the privileges of (French) citizenship. It was only in the 1950s that French colonies were awarded a restricted right to vote for France’s West African territorial assembly. That franchise widened with independence in 1960. But in practice this meant relatively little for most people. Formal political opposition was banned and most villagers were simply ordered by chiefs to vote for the ruling party.

A brief but intense revolutionary interlude in the 1980s changed everything. Coming to power in a popularly-supported armed takeover in 1983, Thomas Sankara’s governing council created thousands of directly-elected Committees for the Defence of the Revolution. Despite serious abuses, these bodies were popular among young people and previously marginalised ethnic and social groups.

The government did not go as far as organising representative elections, but state institutions were expanded, stimulating more direct interaction with ordinary people and a growth in citizen consciousness. This was accompanied by a new national identity, exemplified by the change in the country’s name to Burkina Faso (meaning “land of the incorruptible”).

This moment, however, was short-lived. In 1987, Sankara was assassinated in a coup led by Blaise Compaoré. The new president undid many of his former friend’s accomplishments and established a semi-authoritarian regime characterised by corruption, coercion and economic hardship. A new constitution in 1991 enshrined numerous rights on paper, but the reality was one of ongoing repression in which citizens’ interactions with the state were often conflictual. For nearly three decades, ordinary people were largely silenced, their demands and rights suppressed.

In today’s Burkina Faso, things have reversed once again. In 2014, after 27 years under Compaoré, the people decided enough was enough. As the president moved to violate constitutional term limits, scores of activist groups such as the Balai citoyen and Front de résistance citoyenne emerged.

In defiance of a repressive regime, protests movements in both rural and urban areas spread. As they took to the streets, many expressed economic and social grievances, but an underlying driver of the resistance was a conscious struggle for citizenship. Demonstrators wielded signs reading: “We’re citizens. We’ll never be subjects”. People gained a greater sense of belonging to a national community capable of asserting its rights and, in October 2014, forced Compaoré to flee through their sheer weight of numbers.

Since that moment, it has been impossible to put the genie of people power back into the bottle. When Compaoré supporters attempted to re-take power in a coup in September 2015, for instance, much of the country remobilised in a self-described “citizens resistance”.

This phenomenon has changed in recent years. After the November 2015 elections, strikes and protests continued but lacked a sharp political edge and focused largely on specific grievances. Organised civil society activism meanwhile lost some of its direction. After Kaboré formed a coalition government – ranging from fellow moderates who once worked with Compaoré to radical followers of Sankara – some civil society groups backed the new government while others went into opposition. A few such as the Balai citoyen remain independent, supporting government reforms on some occasions while censuring authorities on others.

Yet despite losing some of their movements’ former coherence, Burkinabè citizens crucially remain active and determined. About halfway through his five-year term, Kaboré has learnt to tread carefully as demonstrations on a broad range of issues have continued apace. When confronted with protests or criticism, he has typically submitted to questioning from a variety of citizens’ forums and usually promised to do better.

For many activists, however, promises are no longer enough. As groups around Burkina Faso hold demonstrations on myriad concerns, protesters recall that they are the ones that transformed the country in 2014. They continue to champion the power of the streets as a democratic expression of citizen engagement.

As Smockey, a popular rapper and leader of Balai citoyen, puts it: “It’s important to maintain some form of counter-power, to force the government to respect its commitments”. Just a few years after they took to the streets to remove one of the world’s longest-standing leaders, Burkina Faso’s citizens remember all too well what it means to live under a regime that does not.

Ernest Harsch is the author of the recently-released 'Burkina Faso: A History of Power, Protest and Revolution' (Zed Books). He has written on Africa for more than four decades and is a research scholar at the Institute of African Studies, Columbia University, New York.

Saudi Arabia, the UAE and Egypt have been heavily involved in Sudan following al-Bashir’s downfall. But not everything is going their way. In Sudan, the revolutionaries who overthrew President Omar ...
By continuing to browse the site you are agreeing to our use of cookies.