How Ethiopia and Eritrea can forge a new relationship

Four key issues that will need to be resolved for the neighbours to normalise relations. 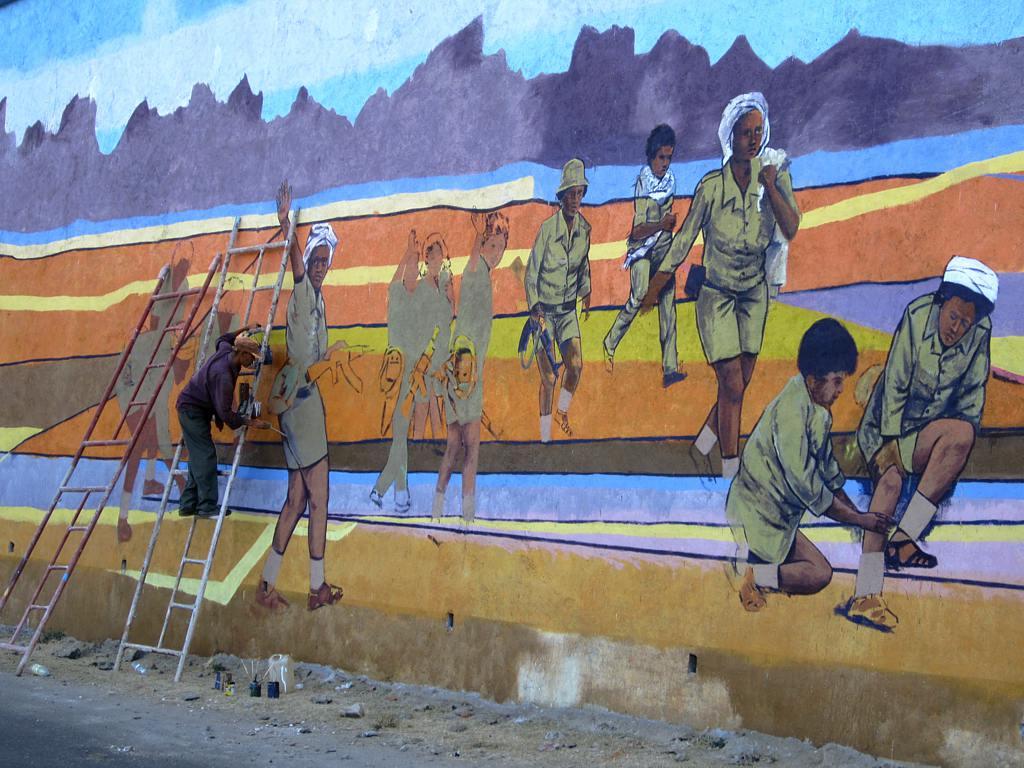 An artist in Eritrea paints a patriotic mural of the war. Credit: David Stanley.

In 1991, as the US Assistant Secretary of State for African Affairs, I led peace talks between Ethiopia and Eritrean separatists. The negotiations ended a nearly thirty-year war and established Eritrea as an independent state.

These outcomes were a geopolitical success, but they did not resolve the bitter acrimony between the two countries. And since that moment, the relationship between these neighbours has been frozen in hostility. It has included a 1998-2000 border war, shadowy intelligence efforts, and accusations of tacit support for rival militant groups. Both sides have maintained a heavy and expensive military presence along their border, and a once vigorous economic relationship has totally dried up.

Yet a détente may finally be emerging, driven by the arrival of a new Prime Minister in Addis Ababa, Abiy Ahmed. On 6 June, the Ethiopian government announced it would finally implement the 2000 Algiers Agreement, an internationally sponsored peace treaty and border demarcation signed by Ethiopia and Eritrea.

“All that we have achieved from the situation of the last 20 years is tension,” Abiy later remarked. “We need to expend all our efforts toward peace and reconciliation and extricate ourselves from petty conflicts and divisions, and focus on eliminating poverty.” The prime minister referred to Ethiopians and Eritreans as “brotherly peoples” and expressed hopes for “economic ties between Asmara and Addis Ababa”.

The centrepiece of this move is the highly symbolic town of Badme, a disputed territory which Ethiopia illegally occupied in 1998, sparking the border war. As part of the peace agreement, a Hague commission declared Badme part of Eritrea, but Ethiopia never accepted this decision and continued to occupy the town.

Ethiopia’s pledge to cede Badme to Eritrea is therefore deeply momentous. Eritrea has consistently stated that all issues would be on the table for negotiation as soon as Ethiopia withdrew from Badme, a symbol of Eritrean resentment since the last war ended in 2002.

This means that, in theory, the door is now open for bilateral discussions. It is hard to overstate how positive a friendly relationship between Ethiopia and Eritrea could be for the region, which has been dogged by poverty, famine, and insecurity.

It is too early to say if and when such talks could be held, but these are the key issues that would need to be resolved as priorities for the partnership to move forwards.

Since the end of the war in 2000, Ethiopia and Eritrea have accused each other of supporting “opposition groups”, both armed and unarmed. It is difficult to confirm or deny their allegations, but it is clear that the first order of business should be a mutual security guarantee. Both governments should agree not to allow their territories to be used for hostile activity and pledge to reduce their military forces along the border by 80%.

The two defence establishments could then begin discussions on joint actions against “jihadist” militants threatening the security and stability of both Ethiopia and Eritrea.

2) Re-opening the border for trade

Prior to the war, Ethiopia and Eritrea enjoyed what was essentially a common market. Cross-border trade flowed freely, with neither tariff nor non-tariff barriers. Eritrea’s introduction in 1997 of its own currency, the Nakfa, made cross-border trade more complicated, but had little impact on commerce. Ethiopia’s later insistence that cross-border trade be conducted in US dollars created an additional impediment.

The two governments should now declare that the border will re-open to commerce with no barriers. To overcome the inhibiting factor of US dollar trade financing, the governments can jointly request that the International Monetary Fund establish a currency-clearing mechanism allowing businesses to pay for goods in either country’s local currency. The IMF has established several such mechanisms in other regions of the world.

Prior to the war, Ethiopia had full access to the Eritrean ports of Assab and Massawa. Ethiopia had its own customs facility in Assab where they cleared imports destined for its markets. All of this was interrupted by the war. After Eritrea gained independence in 1993, Ethiopia became landlocked and had to rely exclusively on the railroad from Addis Ababa to the port of Djibouti, bypassing Eritrean territory.

There is no reason why the normalisation discussions could not arrange for a restoration of Ethiopia’s access to Eritrea’s two ports. An existing high-quality road from Massawa port to Ethiopia could serve northern Ethiopia. The Assab port meanwhile is relatively close to the capital Addis Ababa.

Under such an arrangement, Eritrea would gain revenue from Ethiopian rental payments. Ethiopia would gain more efficient movement of imported merchandise and aid. In addition, Ethiopia would no longer have to rely exclusively on the distant port of Djibouti and the less-than-reliable railway connection.

The UN Security Council imposed sanctions on Eritrea in 2011 based on some weak evidence of its alleged support for al-Shabaab militants in Somalia. Since the allegations against Eritrea are now old and there is no evidence of recent activities, it would be appropriate for Ethiopia and the US to jointly sponsor a resolution in the Security Council to lift these sanctions.

The new regime in Ethiopia has brought fresh hope of a healthy and stable relationship with Eritrea. The two governments undoubtedly have additional issues they will want to raise during discussions. But if they start with those above, they will be well on their way to a win-win outcome.