Resolving the Ethiopia-Eritrea border: What actually needs to be done?

Ethiopia has broken the stalemate, but several practical and political challenges remain. In response to Prime Minister Abiy Ahmed’s decision to accept the Algiers Agreement, signed at the end of the tragic 1998-2000 border war, many Eritreans will be thinking: “about time too”. And they are right.

The Boundary Commission, established in accordance with the treaty, ruled on where the disputed border between the two countries lay. But Ethiopia – discovering that the border town of Badme, which had ignited the war, had been awarded to Eritrea – began insisting on further talks. Eritrea refused, saying that there was nothing more to discuss.

The Boundary Commission faced enormous obstacles as both countries (but mostly Ethiopia) raised objections to the demarcation process. Finally, it threw up its hands in despair and was disbanded in 2007.

This is how matters stood until Prime Minister Abiy’s decision to break the stalemate earlier this month. This is a first step, but achieving peace is not just a matter of issuing statements. Here are some of the key issues.

1) Both countries – in their wisdom – insisted at Algiers that the Boundary Commission would have no wriggle room in deciding where the border should be. Theirs would be a purely legal judgement based on “pertinent colonial treaties (1900, 1902 and 1908) and applicable international law” rather than on fairness or justice. In the legal jargon, it was stated: “The Commission shall not have the power to make decisions ex aequo et bono.”

That was what both Ethiopia and Eritrea demanded and what they got. As a result, the border cuts communities in half, deprives farmers of access to their fields and pastures, and divides villages. It would be perfectly possible for both sides make sensible adjustments here and there, but that would require co-operation and goodwill: something that has been absent since the war erupted in 1998.

2) Both sides will also have to agree on the date on which the border ruling will be implemented. Without this coordination, there could be a complete absence of governmental authority along the one-thousand kilometre border as one country pulls out without the other arriving.

3) The Algiers Agreement established a Temporary Security Zone that keeps both sides 25 kilometres apart – i.e. out of artillery range of each other. But this Zone was set up on the Eritrean side of the unofficial border, since Eritrea lost the war. This is shown in the United Nations map below, which was never officially published. 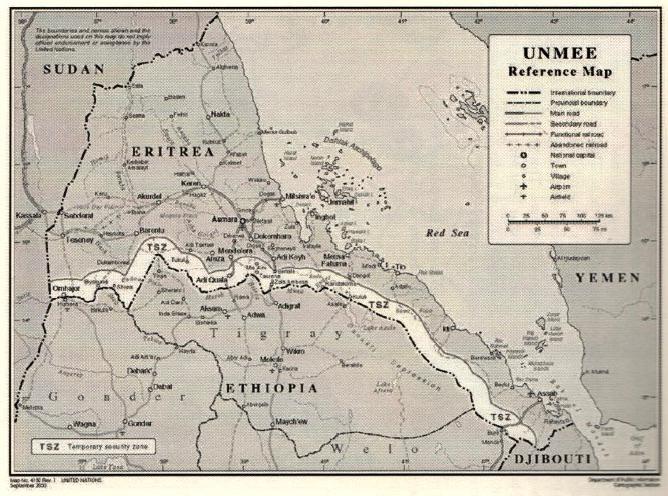 This means that Ethiopian forces will have to pull out of Eritrea and be re-deployed along the official border. Because the Commission awarded some areas of land to Ethiopia as well as Eritrea, however, Ethiopian troops will have to advance in some places as they retreat in others. Eritrean soldiers will have to do the same. This requires careful co-ordination if it is to be achieved peacefully.

4) Where will new border and customs posts be established? These need to be aligned, otherwise they will not work. Again, discussions and co-operation are required.

Even this brief overview of the issues shows how vital it is that Ethiopia and Eritrea talk to each other. There is much to discuss, even if the border is drawn precisely to meet the Boundary Commission’s ruling.

Who should assist in this? Again, the Algiers treaty is helpful. It required that the Boundary Commission ruling be sent to the Secretary-Generals of the UN and Organisation of African Unity (now the African Union). Article 4 paragraph 16 states: “Recognizing that the results of the delimitation and demarcation process are not yet known, the parties request the United Nations to facilitate resolution of problems which may arise due to the transfer of territorial control, including the consequences for individuals residing in previously disputed territory.”

Surely this is an invitation for the UN Secretary General to use his good offices to overcome the issues raised above. The Algiers Agreement was witnessed by the United States and European Union who should, in good conscience, also play their part.

Having said this, no-one should underestimate the political problems the Abiy peace initiative has raised for both countries. The Tigray People’s Liberation Front – formerly the most powerful party within Ethiopia’s governing EPRDF alliance is furious the Prime Minister is apparently turning his back on the path trodden by his predecessor Meles Zenawi. Demonstrations have been organised in Tigray and there could be a showdown within the EPRDF.

In Eritrea there has, officially, been stony silence. This is in line with President Isaias Afwerki’s long-held belief that he can outlast any international problem by just sitting tight. In the end, he believes, the other side will fold. He has generally been right, although this has come at the cost of impoverishing his nation and resulted in an indefinite confrontation with Ethiopia, leaving an entire generation trapped in conscription. Unofficially, government controlled media has poured scorn on Abiy’s offer.

Clearly the road to a final resolution of the border could be long and rocky. Without the immediate support and involvement of the UN and the rest of the international community, it is unlikely to succeed.