NigeriaPolitics
Home›African Arguments›Country›West›Nigeria›“It’s everywhere”: Vote-buying gets more brazen in Nigeria ahead of 2019

“It’s everywhere”: Vote-buying gets more brazen in Nigeria ahead of 2019

With party agents openly offering people cash for votes, many fear that money could be the determining factor in Nigeria’s upcoming elections. 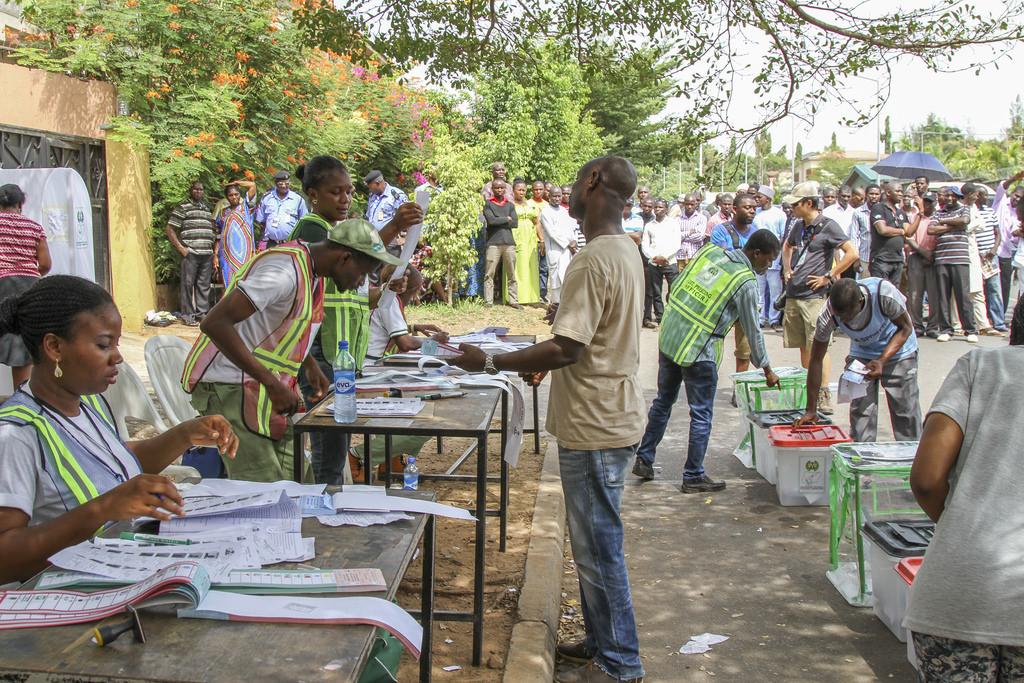 Elections in Nigeria in 2015. Credit: US Embassy / Idika Onyukwu.

Last week, a civil society group took Nigeria’s electoral commission to court for its alleged failure to address vote-buying in July’s Ekiti governorship election. The case, brought by Socio-Economic Rights and Accountability Project (SERAP), is an indication of growing concerns around the illicit practice ahead of the crucial 2019 elections.

Vote-buying has always played a role in Nigeria’s polls, but many have been outraged at the apparent brazenness with which party officials have sought to sway voters in recent contests. According to observers, agents from both the ruling All Progressives Congress (APC) and main opposition People’s Democratic Party (PDP) openly offered money for votes to people in Ekiti and in recent by-elections elsewhere.

“They gave me N2500 ($7) to vote for their candidate,” a 21-year old voter called Peter told African Arguments. “We were happy and collected it because I didn’t have any money…They collected our phone numbers and said they would call us in the morning.”

Observers report that this practice has been used to induce thousands of Nigerian voters in the past few months. Handouts range from as low as N1,000 ($2.80) to around N5,000 ($14). The agreement can take different forms. Agents may buy people’s permanent voters card or take voters’ bank details and transfer the agreed amount the morning of the vote. In Ekiti, government employees and pensioners allegedly received mobile money transactions of N3-4000 ($8.40-11.20) a few hours before voting opened.

The general strategy of offering enticements to voters is not new, but analysts suggest its prevalence may be. Nigeria recently became the country with the largest number of people living in extreme poverty – overtaking the almost seven times more populous India – and the practice of vote-buying has reportedly become more open and explicit.

“They have capitalised on the poverty of the people to be buying their votes,” says Professor Jonah Onuoha, director of Centre for American Studies at the University of Nigeria. Previously vote-buying took the more subtle form of goods or services, he adds, “but now it has been converted to mostly cash”.

Who will stop vote-buying?

After the Ekiti election, INEC chief Mahmood Yakubu acknowledged that there had been instances of vote-buying. Officials within the commission insist that they are doing all it can to address the issue, including working with security agencies and embarking on voter education. Shortly after the vote, ten people were arrested for vote-buying.

However, many civil society groups and experts are sceptical about the extent of the measures being taken against a fraud that is allegedly growing exponentially ahead of the 2019 general elections scheduled to begin in February. SERAP’s court petition accuses INEC of a “failure to put Ekiti vote buyers on trial and do something about the allegations of vote buying”.

Olu Omotayo, president of the Civil Rights Realisation and Advancement Network, points out that vote-buying is explicitly outlawed with heavy penalties. But he warns of difficulties in working across sectors to ensure these laws are followed. “The electoral law has addressed the issue but it is the enforcement that is the challenge now,” he says.

Onuoha suggests that even with a strong will and determination, INEC may struggle to eradicate a practice which all political parties are engaging. “The unfortunate thing is that both the ruling party and opposition are involved in it. So who is going to stop it?” he asks.

“If this trend is not nipped in the bud, next year’s election will be a sham”

If INEC fails to prevent widespread vote-buying in the 2019 general elections, many fear that the practice could significantly affect the results.

“It is everywhere,” says Onuoha. “All of them engage in it and it has gradually taken hold of the electoral system. Competent candidates are frequently replaced with incompetent ones because they can afford to induce voters… If this trend is not nipped in the bud, next year’s election will be a sham.”

Nigerian activists worry that rather than having meaningful debates around issues, the elections could hinge on simply which candidate can raise more money and on which promises to distribute higher rewards to voters.

The increasingly direct correlation between electoral success and wealth may also determine who can and can’t run. The practice may rule out candidates from less privileged backgrounds and younger candidates – or at least make them indebted to their patrons.

“It doesn’t give a fair playing ground for young people who cannot afford to buy votes,” says Nebo Obinna Collins of the New Century Initiative, a youth development organisation. “It will put them under pressure to accept offers from political godfathers and possibly endanger their interest to help in building the society.”

With the 2019 elections just five months away, some believe that money is warping the political field and that wealth is becoming more important in voters’ deliberations than ethnicity or religion, let alone competency, integrity or vision. They warn of what will happen if INEC fails to stop vote-buying spreading further and becomes the modus operandi of all candidates and the expectation among voters.

Some hope that voters will get wise, as in various other countries, and find ways to take agents’ money while still voting for their preferred candidate. But for now, it seems that for many voters like Peter, the practice is working as intended.

“Of course we [voted as instructed],” he said. “The other candidate didn’t bring money. I didn’t get anything from him.”