While “conservation” is usually seen as a progressive cause in the West, it is often despised in Africa as just more (white) colonial land theft. 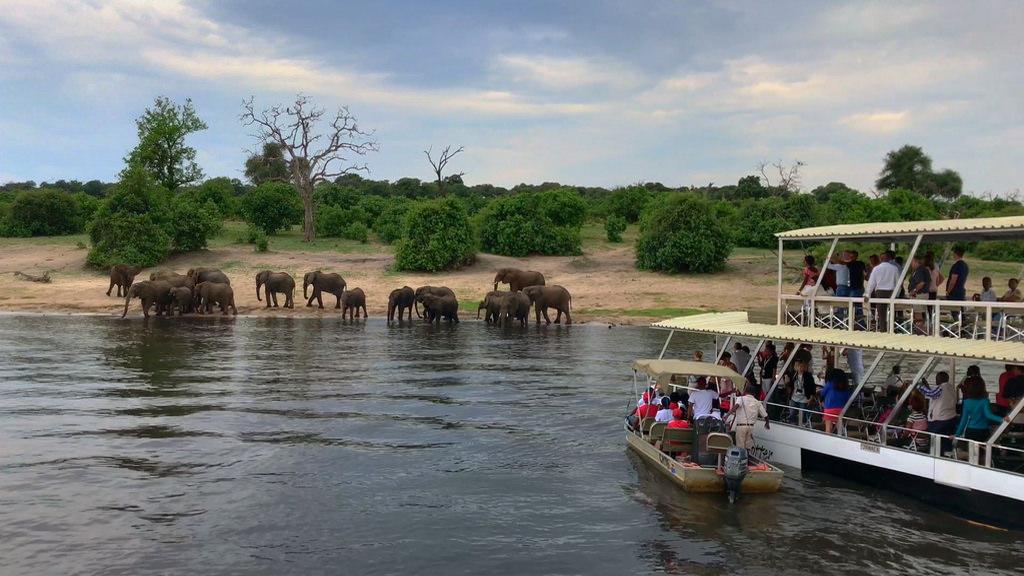 Who benefited from the false claim spreading that 87 elephants were poached in Botswana? Credit: UNWTO.

Early in September, international news was awash with the claim that 87 elephants had been “killed by poachers” in Botswana. The story originated from the NGO Elephants Without Borders, which received massive publicity – and presumably donations – as a result. Even the beleaguered UK Prime Minister tweeted the story, while a petition calling for wildlife guards to be re-armed surpassed 150,000 signatures.

I know a little of Botswana. A few years ago, I was declared “public enemy number one”, threatened by a government spokesman on television, and banned from the country. This was because Survival International was instrumental in stopping the government destroying the Bushmen tribes of the Central Kalahari. The authorities had cut off their water supply and forced them off their ancestral lands. The Bushmen fought back and eventually won the longest court case in Botswana’s history.

I have some knowledge too of how false information is frequently broadcast in the name of conservation. A few years ago, for example, claims emerged that al-Shabaab militants in Somalia were being funded by ivory poaching. This assertion was made first made by a self-styled “anti-poaching consultant” – and former Israeli commando – presumably keen on drumming up business. The link was totally spurious and Interpol pointed out it was false, but that didn’t stop it spreading. In 2014, the Oscar-winning film director Kathryn Bigelow even made an animation about it to help raise money for another conservation NGO, Wild Aid.

With this in mind, I greeted the recent news from Botswana with scepticism. Soon after the claim of 87 killed elephants was first made, the government issued a press release calling the story “false and misleading”. It said that the true number of carcasses found was far fewer, that the bodies had been discovered over a period of several months, and that many had died from natural causes. Since the original report came out, a physical inspection found just 19 dead elephants, of which six had been killed by poachers.

Several prominent scientists in Botswana were also quick to question the BBC report that first carried the claim, saying they could “find no scientific basis for the dramatic assertions made”. In their statement, one of the false claims these experts were particularly keen to debunk was that poaching had increased because wildlife guards had been disarmed. “The Botswana Department of Wildlife and National Parks is still armed,” they emphasised, “but no longer carry automatic assault rifles”.

So what’s going on?

Before I try to answer, I should declare a personal interest. I have spent over 45 years working on tribal peoples’ rights. Rangers have been the scourge of the Bushmen for years, beating them up on a routine basis. Heavily arming wildlife guards is likely to bring more abuses against local people, including extrajudicial executions, with “evidence” then “found” near the bodies and never any “poachers” left alive to answer for themselves.

I should also make it clear that – while I fully support protecting healthy elephant herds and have spent many hours admiring these magnificent, gentle creatures myself –  I accept that there are now too many elephants in parts of southern Africa. In Chobe, for example, there are estimated to be seven times more elephants than the environment can support. This overpopulation threatens biodiversity and other species. It is also bad for the elephants. If their numbers are not reduced, they will inevitably begin to suffer and die themselves. Elephants double their numbers about every ten years and, like other grazing animals, must have predators if their herds are to remain healthy. It’s harsh, but if you don’t like it, blame nature.

But back to the story. Why did Elephants Without Borders, a body actually contracted by the government that called its story “false”, make such claims about the 87 elephants? I don’t know the answer, but there are plenty of vested interests to bear in mind.

The first is that conservation NGOs are currently strongly promoting the idea of heavily-armed “fortress conservation”. These groups say they consult local people, but this is largely an empty sham. The reality is that wildlife charities don’t want to give up their control of large areas of Africa. They continue to build up protected areas, prohibiting local people from accessing their traditional territories. The notion of “conservation”, usually seen as a progressive cause in the West, is often despised in Africa as just more (white) colonial land theft.

The way in which things aren’t always what they seem can also be seen in the links between big conservation organisations and arms dealers. The large NGO Conservation International (CI) was rumbled a few years ago, for example, for offering to “greenwash” an arms company in exchange for a sizeable donation. In that instance, the meeting was set up by an undercover reporter, but a senior figure from Northrop Grumman, the world’s fifth-biggest arms trader, does actually sit on the NGO’s board. The weapons company really does fund CI to the tune of millions. Arms manufacturers clearly have an interest in ensuring the sales of arms.

It should also be noted that Elephants Without Borders has also received funding from Wilderness Safaris. This tourism company operates luxury camps on Bushman land – needless to say, without their agreement.

We may never know the true story behind the NGO’s false claims (and Elephants Without Borders ignored the questions we put to it). Wealthy conservation organisations are quick to silence criticism with threats of litigation or offers of five-star safaris. This stick-or-carrot combination heads off most investigators. We also can’t forget the political motivations behind the story. Dig a little deeper, and internal political struggles and land disputes are clearly key issues at play in Botswana.

What we can be certain of though is that the conservation propaganda machine will continue, as it has for decades, to assail the world with stories of the extinction of the African elephant. This calamity is always described “imminent” and usually projected some 20 years into the future. It was first predicted in 1908, by the way.

Should that occur, it would be a tragedy. But with the direction things are moving, culpability would lie with “fortress conservation” itself. This heavy-handed, and often racist, approach evicts people from land that they have been managing expertly for generations. It increases anger and destroys livelihoods, making poaching more likely. If it isn’t abandoned, then my own prediction is the extinction of protected zones in Africa – perhaps within a couple of generations.

It also endangers the environment in other ways. Under fortress conservation, mining and logging companies – many of whom fund major wildlife organisations – are often allowed access to protected zones. Meanwhile, the tourism industry, which also has a clear vested interest, presents a clear long-term threat to nature by – amongst other things – privileging certain species to the detriment of others and of biodiversity.

Contrary to those calling for local peoples to be expelled from the land they have protected for generations or for wildlife guards to shoot on sight, it is fortress conservation that is the true threat to the environment. The real story here is not that 87 elephants were found killed, but in whose interests this false claim was made in the first place.

Stephen Corry is the Director of Survival International, the global movement for tribal peoples' rights.