The fearsome feminist activist is now determined to use her ongoing court case to “educate the nation”. 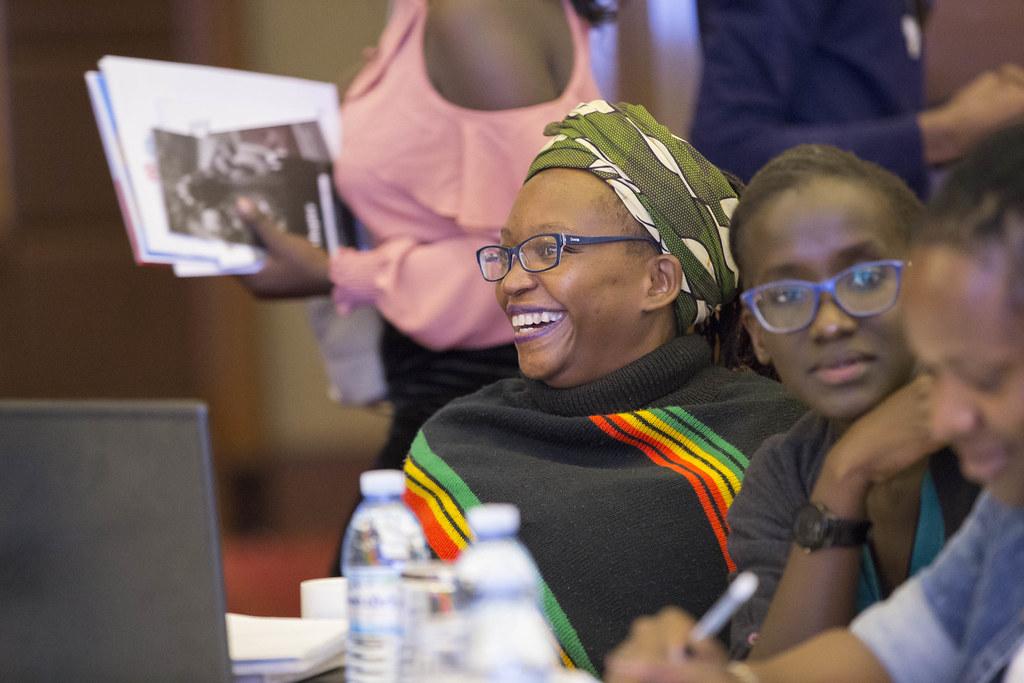 On 9 May 2019, the Ugandan academic and activist Stella Nyanzi finally entered court after multiple postponements in her case and a long wait on the day itself. As she took to the stand in the packed out courtroom, the magistrate suggested the defendant take a seat. Nyanzi was about to accept the offer when she heard the official’s comment that “as a woman, it might be too much for her to keep standing”. At this, Nyanzi immediately changed her mind, declaring: “I’ll stand for the women”.

This show of defiance was characteristic of the courageous feminist. The 45-year-old, who has now been in prison for eight months, is on trial for “cyber harassment and offensive communication”. The charges relate to a provocative and explicit poem she published on Facebook on 16 September 2018, the day after President Yoweri Museveni’s 74th birthday. In the post, Nyanzi condemns Museveni’s 33-year-long rule, claiming Uganda would have been better off if he had died in childbirth.

In a fairly characteristic stanza in which she deploys “radical rudeness”, Nyanzi writes:

“Yoweri, they say it was your birthday yesterday.
How nauseatingly disgusting a day!
I wish the acidic pus flooding Esiteri’s [Museveni’s mother’s] cursed vaginal canal had burnt up your unborn fetus.
Burnt you up as badly as you have corroded all morality and professionalism out of our public institutions in Uganda.”

Prosecutors claim Nyanzi’s poem “disturbed the peace, quiet or right of privacy of President Museveni”. She was arrested in November 2018 and sent to Luzira maximum security prison.

Nyanzi’s ensuing and ongoing trial has been one of a kind. This June, her lawyers argued in court that the activist has no case to answer. They too have mastered the academic’s language and, at one point, questioned the state’s witness Charles Dalton Opwonya for over six hours. Opwonywa, a veteran lawyer and member of Uganda’s Anti-Pornography Committee, was there to argue that Nyanzi’s writing was “lewd and obscene”. The defence team cross-examined his claims, leading to exchanges such as the following:

Q: Is vagina a dirty word?

Opwonya: Most of the time it is.

Q: Is the literal vagina a clean thing?

Q: Can a vagina be dirty?

Opwonya: Yes, if you don’t wash it.

Nyanzi’s lawyers were ultimately unsuccessful in bringing this trial to a brief end when the court announced that Nyanzi does have a case to answer. She starts presenting her defence this week.

According to the Egyptian-American feminist author Mona Eltahawy, “it’s the writer’s job to tell society what it pretends it doesn’t know.” Nyanzi has performed this role for several years using the tactic of public insult and radical rudeness. This strategy has a long history in Uganda and was used against British colonialists.

Where conventional means of protest are deemed insufficient, radical rudeness draws attention by breaking norms. In Uganda, “women don’t swear, women are polite people”, Nyanzi explained to journalist Alice McCool. The only way to challenge power then is to use vulgarity and upset notions of acceptable language. “Grab the president by the balls, grab the fucking homophobes by the balls, and you’ll get their attention,” she said.

Nyanzi has become notorious in Uganda for using this strategy in a number of ways. In 2016, for example, the academic staged a nude protest at Makerere University, her former employer, following a dispute. In 2017, she rebuked Education Minister and First Lady Janet Museveni for claiming there was no budget to buy sanitary pads for girls in school. In a post on Facebook, Nyanzi criticised Janet and referred to the president as a “pair of buttocks”. Nyanzi was charged with “cyber harassment and offensive communication” for that post too.

However, Nyanzi is not only mighty on paper. She is perhaps even mightier on the streets, despite Uganda’s 2013 Public Order Management Act, which has been used to curb dissent in an increasingly unsettled society. Following Janet Museveni’s comments, for example, the activist started the campaign #Pads4Uganda to raise money for school girls to buy sanitary pads and therefore avoid having to drop out of school. She has marched against the rape and murder of women, and spent days and nights with torture victims in hospital.

Nyanzi’s current court case therefore is just the latest instance of her standing up to a patriarchal society and government widely accused of corruption, bad governance and economic mismanagement. Along with her refusal to take a seat in court in her case, Nyanzi also waived her right to bail earlier in the year, telling reporters that “leaving prison without knowing your fate is a total disturbance. It’s an illusion of freedom.”

Nyanzi has proven deeply courageous in confronting President Museveni’s regime, but her activism has come at a personal cost. The state has questioned her mental health using an old colonial law and sought to paint her as a “mad woman” as a way to try to silence her, playing into age-old misogynist narratives. The experience of being in prison for eight months has also affected even the roaring and fearless Nyanzi. In January, the academic appeared in court having lost a lot of weight, with a cannula in her hand and her dreadlocks shaved. She told journalists she had suffered a miscarriage while in prison because the authorities had not provided decent medical care.

Nonetheless, the activist remains defiant. Even on the day, the court deemed that Nyanzi had a case to answer, she was the least shocked in the room. She was seen beaming and told African Arguments that she is determined to use her case “to educate the nation”. Her lawyers have asked the court to summon 20 witnesses including President Museveni.

Through her actions, Nyanzi has shown that fighting for a free, democratic and equal Uganda does not come free. President Museveni has used various tools to try to gag those demanding change, but Nyanzi is not easily silenced. Her struggle stands as a symbol of a nation afflicted by repression and an ageing leader whose intolerance for dissent continues to grow. Her story is one that reminds Ugandans that the struggle for freedom has never been achieved by playing to the standards of civility set by those in power.