In South Africa, a trans inmate fought the state in court. And won. 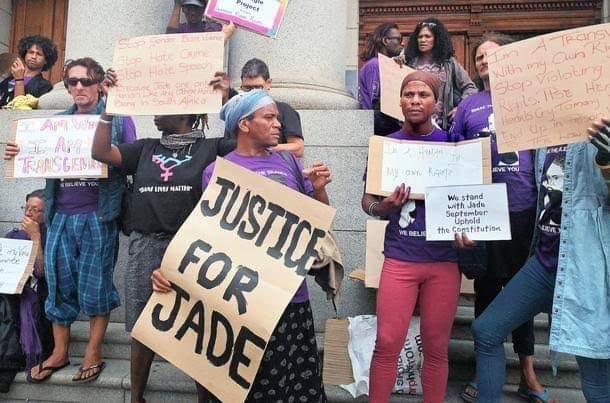 On the 23rd of September, the South African Equality Court handed down a judgment in favour of Jade September, an incarcerated transgender woman and sex worker. The Court held that the respondents from the State’s Department of Correctional Services had unfairly discriminated against September by not allowing her to express her gender identity.

September was sentenced to prison for 15 years after being convicted of murder, theft and attempted theft of a motor vehicle. Serving part of this sentence in spaces designated for males, September was harassed by prison officials for being transgender and prevented from expressing her gender. She was forced to cut her hair and prohibited from wearing make-up, jewellery and gender-affirming underwear. Prison staff refused to address September as a woman and use she/her pronouns. She was also placed in segregated confinement as punishment for her behaviour.

In response, September took the matter to court. Represented by Lawyers for Human Rights, she made the case that “her gender identity is the core and the essence of who she is as a human being”. Her team argued that her treatment in prison amounted to unfair discrimination and that her rights – according to the South African Constitution, international law, and foreign and domestic judgments – had been violated.

Defending the Department of Correctional Services, the State argued that September had been treated appropriately as an inmate who is anatomically and legally male. It was further argued that if September had been discriminated against, those actions had not been unfair. The State contended that any limitations placed on her rights were for her own safety as expressing “herself as a female, would expose the applicant to sexual violence”. The lawyers also disputed the claim September had been placed in segregated confinement for asserting her gender. They maintained that she was punished in response to her aggressive behaviour after her make-up was confiscated.

Gender DynamiX, an organisation that deals with trans and gender diverse people’s rights, was also a party to the proceedings. Represented by the Legal Resource Center, its submissions situated the matter in a broader socio-economic context.

“The legal gender recognition of trans and gender diverse people is often set in a binary and medicalised,” said Liberty Matthyse, executive director of Gender DynamiX. She pointed out that “surgical or medical treatment” is required to change one’s gender market and that “gender affirming health care in South Africa is largely inaccessible to a large part of the trans and gender diverse population.”

Indeed, private gender affirming surgery is costly and often not covered by medical aid. Furthermore, the current waiting list for this surgery in government hospitals is roughly 25 years. These factors contextualise why September, who wants to transition medically, has not yet been able to access the necessary medical care and is still legally recognised as male.

Trans and gender diverse people in South Africa face high levels of discrimination in many other ways despite South Africa’s inclusive laws and policies on paper. Discrimination in schools and work places results in low levels of formal education and employment. Meanwhile, social stigma often leads to family rejection and homelessness.

Ten months after September’s case was heard, Judge Chantal Fortuin ruled largely in favour of the applicant. While the court found that September’s placement in segregation was related to her belligerent behaviour and therefore not discriminatory, it was critical of the prison’s other actions. It rejected the State’s argument that September was being prevented from expressing her gender for her own protection and said that there were less restrictive means to keep the inmate safe. The judge ruled that the respondents’ failure to allow September to express her gender identity was “manifestly unfair”.

The Court declared the prison’s operating procedures that prevent transgender inmates from expressing their gender to be unconstitutional. It ordered that September be allowed to express her gender in prison and be addressed as a woman. The judge also provided an option for September to be transferred to a prison space designated for females.

To help bridge the gap between inclusive policy and its realisation in practice, the Court further ordered that all employees of the Department of Correctional Services undergo mandatory transgender sensitivity training.  This instruction was received with joy and celebration by the many trans and gender diverse people who filled the courtroom in support of September.

“Its implications are broader”

The momentous ruling affirmed that trans rights and prisoners’ rights are human rights and is a step in the right direction. An ethical government that purports to have a strong human rights culture must ensure its prisoners are not subjected to cruel and torturous punishment. This was highlighted in the judgment’s opening Dostoyevsky quote that “a society should be judged not by how it treats its outstanding citizens, but by how it treats its criminals.”.

The judgment is a ground-breaking moment in the development of an inclusive legal system that accounts for the spectrum of trans people’s lives.

“Even though this case was about trans rights in prison, its implications are broader,” commented Sanja Bornman, an attorney from Lawyers for Human Rights who worked on this case. “The recognition of trans people’s constitutional rights requires that every single state service such as shelters, hospitals, clinics, home affairs, and schools have in place policies and practices that are inclusive of trans people.”

The ruling and the fact it allowed the option of September being transferred to a prison designated for females emphasises South Africa’s legal duty to reasonably accommodate gendered difference. The gendered self is ever changing and a legal remedy that may work for one trans person may not work for another. The flexible approach to gender shown by the court pushes the law and society to progress beyond the idea that gender exists in a fixed binary solely determined by the sex that one is assigned at birth. Its ruling emphasises that institutions and individuals are responsible for expanding space to allow for gender self-identification.

The judgment also crucially offers LGBTQI+ Africans an emboldening story of a black trans woman’s resilience in the face of systemic discrimination.

Nigel Patel is a philosophy and law graduate and a queer rights activist.