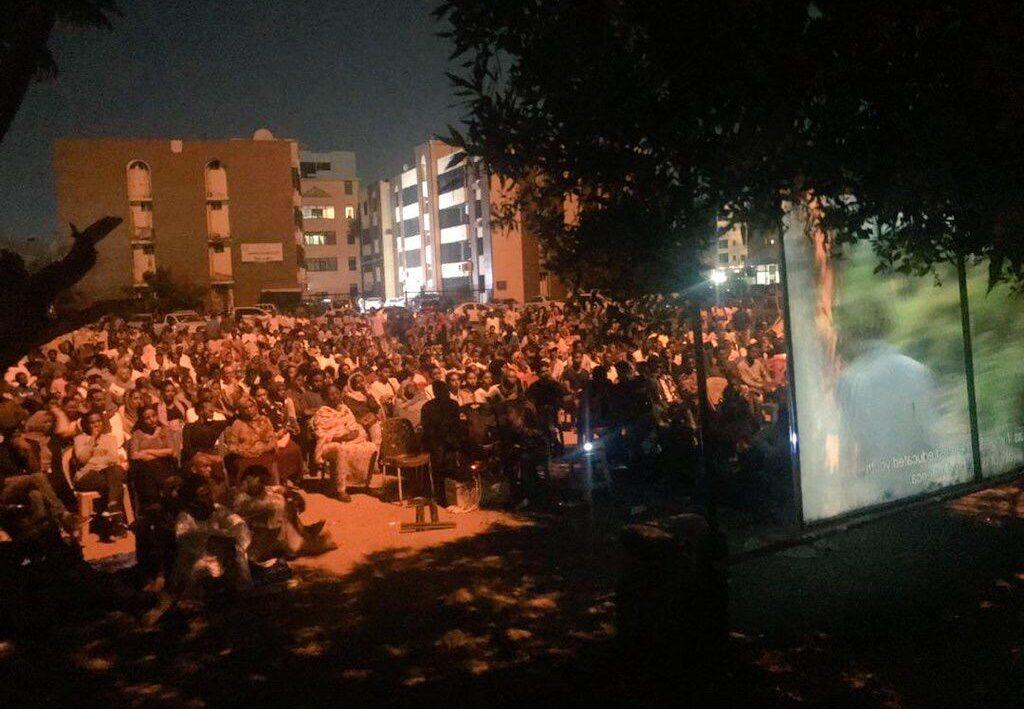 Earlier this summer, Lamia Nabil and her friends were sitting drinking tea in Khartoum. They were discussing Sudanese politics in the aftermath President Omar al-Bashir’s momentous fall in April when Nabil remarked that she could do with a break. She wished that she could just get some popcorn and watch a Charlie Chaplin film, she said.

Her passing comment struck a chord with her friends. A few weeks later on a Thursday night in September, crowds gathered under the stars for a free screening of Modern Times.

“Every seat was taken. Many people sat on the floor while others had to stand,” says Shaheen al-Sharif, a schoolteacher and one of the organisers. “The entire community came together to make this happen. One person brought a projector, another speakers. People donated fabric to put up behind the projector. The tea lady donated chairs.”

Soon, Amarat District was screening films twice a month and other neighbourhood committees started to follow its example. On some occasions, people gathered to watch Western films like The Sound of Music, Sherlock Holmes and Aladdin. Other times, groups made sure to organise screenings of Sudanese classics such as Beats of the Antonov, Tajooj and Human Being (Insan).

“Under the previous regime we lived in a bubble where everything was stifled”, says al-Sharif. “An integral part of this revolution means learning our history and about each other and a large part of that comes through embracing our literature, film and creativity, telling the Sudanese story through these lenses. This is why we want to screen Sudanese films.” For the young Sudanese who formed the backbone of the protest movement that led to the al-Bashir’s ouster, these screenings were new and exciting experiences. For some older generations, they evoked memories of times passed.

“During colonial times, we had ‘moving cinemas’ which were vehicles with a screen and speakers, often airing ‘educational’ films which spread propaganda,” says architect Zainab Gaafar. “Years later when people began to acquire televisions, you would see large groups sitting in communal courtyards watching TV shows.”

65-year-old Hassan Abbas also recalls the importance of movies during his childhood. “Since the 1940s and 1950s there were cinemas and open air screenings showing Hollywood, Bollywood and Egyptian films,” he says. “We would wait with excitement to hear about new film releases and rush to get our tickets. This was a huge part of our lives growing up in Sudan.”

This changed, however, during the economic woes that followed the arrival of al-Bashir regime in 1989 and the imposition of US sanctions in the 1990s. A curfew imposed soon after the new president took office also stopped people going out in the evening and reduced the appeal of public gatherings even after it was lifted. Sudanese filmmakers struggled and open-air screenings dwindled.

“It was one more thing we lost to that government,” says Abbas. “It almost felt like a part of every-day culture was slowly erased. The excitement of heading to the cinema, seeing film posters around and being full of hope about what Sudanese cinema would one day bring us diminished in such a short space of time.” Three decades on, those old traditions are re-emerging. Following months of widespread protests across Sudan and an enormous sit-in on the streets of Khartoum in early 2019, al-Bashir was overthrown by senior military figures. After months of tense negotiations, the military and civilian representatives signed a power-sharing agreement to oversee a 39-month transition before elections.

“We were tired, but it was the youth of this country that was exhausted,” says Abbas. “The protests were not about prices of bread or fuel. It was about the incompetence, the corruption and the oppression which were the hallmarks of the regime.”

It was those same young people that organised the Charlie Chaplin screening and continue to uphold the hopes of the uprising. “This revolution was led by the youth,” says al-Sharif. “We feel responsible to see it through till the end and have learnt from previous revolutions which, in many ways, were left unfinished. Almost everyone knows someone who died fighting for this. We owe it to the martyrs.”

This ongoing project to transform Sudan has many levels, from the national to the local, and from the explicitly political to the everyday. This is perfectly captured in the new open air cinemas and the fact that they are being organised by neighbourhood committees. “When Bashir was in power, the neighbourhood committees were largely affiliated with the regime,” says Gaafar. “During the revolution, people have reclaimed these through organising protests to setting up film screenings to leading other community initiatives.”

While they may have started as a way to unwind from thinking about politics, the ongoing screenings epitomise so much of Sudan’s revolution. Led by the youth, they champion film as a way to reclaim public spaces, bring people together, and recover so much of what was previously lost, stolen or suppressed.